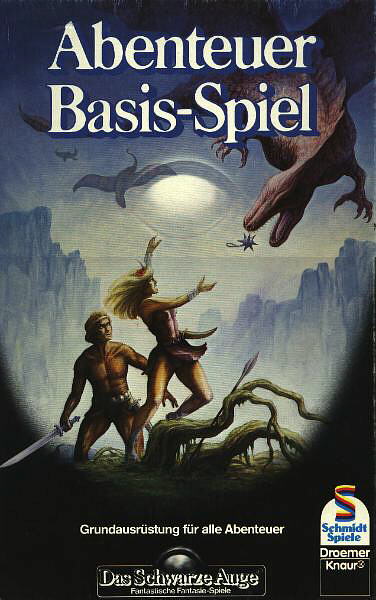 The world of video game RPGs is generally viewed as divided into the two general styles of Japanese and Western RPGs, but a number of European gamers distinguish yet another group. While not as big as the gap between Eastern and Western RPG traditions, the difference between American and European games becomes most observable in medieval fantasy worlds that are often built on a more earthy and differentiated medieval setting, but science fiction RPGs like Albion and Robinson’s Requiem easily betray their origin as well.

One famous early representative for the genre in the Old World was Attic Entertainment Software. Founded by Guido Henkel, Hans-Jürgen Brändle and Jochen Hamma, Attic was still a pretty small developer when they rose to fame with Blade of Destiny, the first entry in the Realms of Arkania series. They had been around since 1990 and gotten some experience before with games like Spirit of Adventure and the Horror-Adventure Lords of Doom, which look and feel like spiritual predecessors to the Arkania games. However, neither of these was particularly successful (nor particularly good), and thus the chance to use a license as prestigious (in Germany) as The Dark Eye came as a big surprise for the young developers.

The Realms of Arkania games are a prime example of the classical Tolkien-esque medieval fantasy universe. Based on Germany’s most popular pen & paper role playing game, it was also the first German computer RPG series to get widely recognized outside of its home country. To this day it holds a stable hardcore fanbase that loves the games for their comprehensive adaption of the pen & paper ruleset and the believable medieval fantasy setting. The programs even contain the option to print out the heroes’ statistics to continue playing them in the pen & paper game. Blade of Destiny‘s story has even been conceived by writers from the P&P game, and its major events are considered official canon. 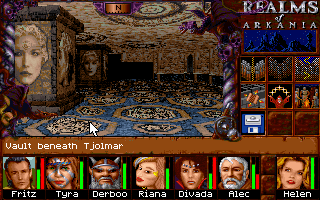 Because all three games take place in the northern part of the continent Arkania, the series is also known as the Northern Reaches Trilogy, or Northlands Trilogy (Nordland-Trilogie in German). However, even within this limited area, every game covers a different region and there’s a lot of traveling involved, with the exception of the last part, which takes place entirely in one single city. While the Thorwalians in the first game are clearly inspired by Vikings, the Swelltdale the party travels through in the second one conveys a much more central European feeling, and in some areas, elves and dwarves are much discriminated against (sending regards to Dragon Age Origins…). However, that is nothing compared to the fate of the Holberkians, a mixed breed between elves and orcs that live in a ghetto in the harbor town Riva, the location for the series finale. All three areas have one thing in common: They are all constantly endangered by the orcish threat.

From these descriptions alone, it becomes clear that knowing The Dark Eye and its world, even though it is not mandatory, helps a lot with orientation in the games’ plot. So let’s first take a brief look at the history of the world and the publication itself.

The fantasy role-playing game Das Schwarze Auge was developed by Ulrich Kiesow, Werner Fuchs and Hans Joachim Alpers. The three had formerly translated several English language pen & paper RPGs, and were responsible for the German localization of Dungeons & Dragons, among other things. Originally, they tried to convince Schmidt Spiele – one of Germany’s biggest board game publishers at the time – to publish the primordial RPG, as well as the long-established book publishing house Droemer Knaur. Both rejected the pitch because the TSR license was too expensive. However, those same companies wanted to claim the new niche nonetheless, and thus assigned the three men to create their own fantasy world and ruleset. Kiesow and company also founded their own publishing house called Phantasy Productions, but that was first used solely for smaller releases like the German version of Tunnels & Trolls, and only took over The Dark Eye in 1997, when Schmidt Spiele abandoned the franchise.

The game was originally intended to be called Aventuria, after the fictional continent it was placed in, but Schmidt Spiele ditched it for the final name, despite the fact that no one had any idea what the titular eye was actually supposed to be (later it was assigned a similar role as the Palantir in Lord of the Rings). It was also Schmidt Spiele’s marketing power that quickly turned the game into a major hit, with 100,000 copies sold in Germany alone in its first year, despite being despised by the hardcore pen and paper crowd at first for its simplicity and some stupid names. (The continent Aventuria probably sounds even more silly to English speakers, and was hence renamed Arkania in the international versions of the computer games. The later English release of the pen and paper game was more daring, though.) The franchise has since spawned four and a half major revisions (the Realms of Arkania series is based on the third edition), a short lived overseas release, more than a hundred novels (at least two of them were published in English, also under the Realms of Arkania label), a board game series, a tabletop wargame, 15 adventures for mobile phones, as well as more than ten computer games. While the hype of the early years has long since worn off, it remains by far the most successful pen and paper RPG in Germany to this day.

Aventuria/Arkania is only one continent of the world of Dere (an anagram of Erde, German for Earth), but remained the only known one for a long time until a second, more exotic campaign world was introduced in 2000 with Myranor. This one was formerly only known from myths as the Golden Land, and said to be the origin of most of Aventuria’s human population. The major political force in Aventuria is the Middenrealm, whose calendar, determined by the reign of the current Emperor, is also followed by the computer games. It is populated by the typical common fantasy races, but with a few minor twists here and there. Its Orcs, for example, are covered with black fur, sometimes depicted almost like a primitive human race rather than actual monsters.

The Realms of Arkania games take place at a time shortly after the mysterious disappearance of the then-current Emperor Hal, which is marked by the Orcstorm. The Orc tribes have united for the first time in history, and now the invading hordes pose a serious threat not only to the northern peoples neighbouring the Orclands, but also to the Middenrealm itself. It is one of those times when heroes are direly needed on every front.

While there are many different minor religions in Aventuria, the most common belief is that of The Twelve, whose temples are also found in the Northlands Trilogy, and their nemesis, The One Without A Name. Similar to ancient Greek or Roman religion, most people believe in all the gods, but chose a single one to worship. The names of these gods also make up the months of the calendar, as well as the hours of the day.