After Metal Slug 4, the next installment headed back to SNK Playmore. This time it’s substantially better compared to Metal Slug 4, featuring plenty of cool new levels and bad guys. The main foe this time is an island native who discovers a mysterious artifact, which possesses him and sends him out of control, leading him to start a cult of madmen. They end up taking over the Ptolemaic Army, adding legions of soldiers to their hordes, though they all look different than the old Morden enemies, and they don’t quite have the same charm. 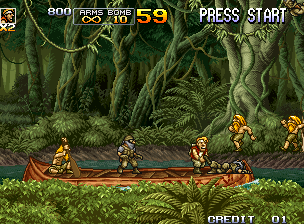 Trevor and Nadia have been given the boot, and Tarma and Eri have returned. The music is once again composed by Toshikazu Tanaka, featuring more rocking guitars and some nice spaghetti-western influenced music. The only real frustrating change is that you slide by holding down and pressing jump. This might not seem too bad, and it’s used for a few obstacles in some areas, but for those accustomed to the controls over the other game, it’s way too easy to slide accidentally to your death when you actually wanted to jump. 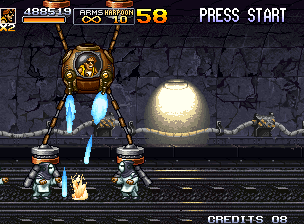 There are only five stages, and while there are a couple of branches, it’s not nearly as expansive as Metal Slug 3. There’s plenty of recycled stuff, though it’s not as conspicuous as in the fourth game. There are some cool parts later in the game, including the Spider Slug, a four legged machine with an orb in the middle, which has both a vulcan cannon and a really cool harpoon. Other new slugs include the Slug Gunner, which can punch enemies with a spiked cannon, and the Car Slug. With the final boss, Metal Slug 5 ventures into supernatural territory with a gigantic demon that has some absolutely gorgeous animation, even though it seems to come out of nowhere and is never really explained. 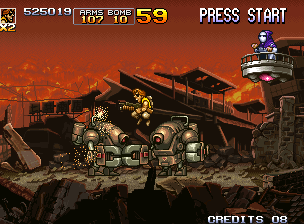 Overall, it’s a decent game, but still pretty uninspired in parts, and some of the boss patterns are still too dense to avoid regularly. Some hackers have discovered extra graphics in the ROM, including a whole other boss that looks like a gigantic stone turtle, and the demasked cult leader riding on a pillar, leading one to believe that a bunch of stuff was cut during development – even more than usual, anyway. The poster also has two characters in a car that never appear – one of them was meant to be a rescued prison with a pompadour named Achilles, who joins alongside you similar to Hyakutaro. However, he never actually appears anywhere. Weirdly, the Flame shot is also absent from the game but present in the code, indicating that someone just plain forgot to include it somewhere. (It could be intentional, but the Flame shot is awesome, so why omit it?) 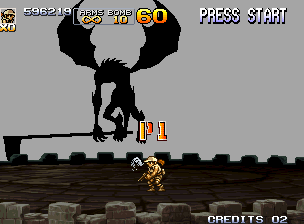 Much like its predecessor, this also received standalone releases for the PlayStation 2 and Xbox in Japan and Europe, and was bundled together along with Metal Slug 4 in the USA. Once again, there are no additional modes other than the trophy room and level select options. The main difference is the enhanced music – the audio in the original game was streamed at a low bit rate to conserve cartridge space.