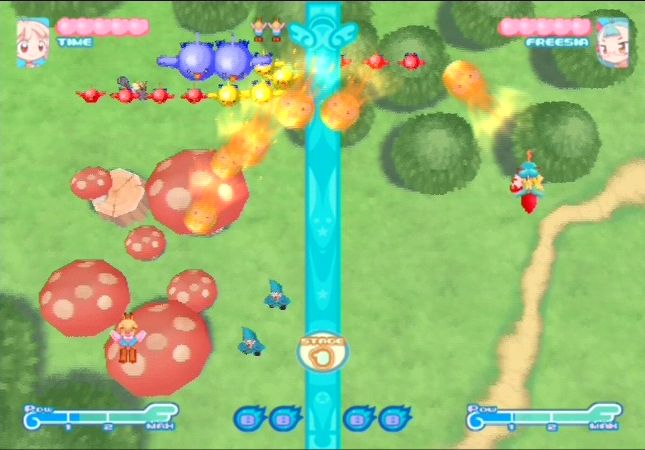 The original Twinkle Star Sprites came out in 1996, and it’s took nearly ten years for a new installment to hit, released for the PlayStation 2. The graphics are now polygonal, filled with gorgeous pastels, but the fuzzy visuals are ultimately not as pretty as the crisp 2D graphics of the original. The character designs have somehow gotten even more ridiculously cute, but it’s to be expected of a game subtitled “La Petite Princess“.

At the beginning, there are a total of fifteen characters to choose from. They all vary in speed, and each has their own unique charge and special attacks. The character roster has been completely changed around for the new game. Favorites like Load Run and Realy Til are still there, but others like Nanja Monja and Arthur Schmitt have unfortunately been cast aside. Thankfully, the new cast of characters is pretty cool, the most interesting being the badass catboy named Vieru, who rides on a guitar and wails every time you unleash a power attack. The new boss character is a samurai girl named Mikoto who isn’t nearly as powerful as Queen Memory – who returns, but is unfortunately quite neutered. Much like the original, the Story Mode has cutscenes before every fight. The heroine this time is a cute little witch named Time, who is seeking the Twinkle Star to make their heart’s desire come true. All of the other characters have single player modes, but the only cutscenes occur during the ending. 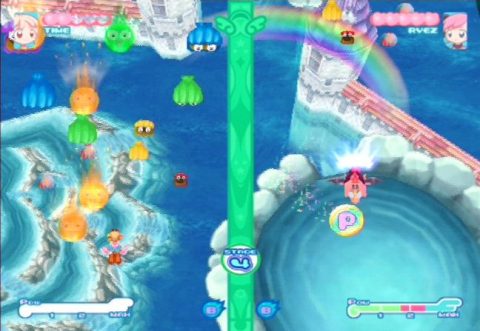 So other than the graphical overhaul and new characters, what’s different for La Petite Princess? As it turns out, not much. The gameplay is exactly the same, although the speed seems to have decreased slightly. Most noticeably, your rapid fire shot isn’t quite as rapid any more, which forces a heavier reliance on the charge shot. In spite of the downshift, the game still inspires quite a bit of panic during the crazier moments, especially if you elect to turn off the slowdown. If that weren’t enough, even most of the soundtrack is remixed from the original.

The only real advancement is the inclusion of online play – it’s long defunct, so it won’t work anymore, but even when it did, it required a set up fee to be paid, and was basically useless to anyone outside of Japan.

Playing through the game with other characters will eventually unlock an emulation of the original Twinkle Star Sprites. The sound seems a little bit off, and it’s lacking any of the cool extras from the Saturn or Dreamcast ports, but it’s an excellent bonus nonetheless.

While fans might view La Petite Princess as almost entirely unnecessary, at least it’s a nice modern overhaul of one of the best puzzle/shooter games ever made.