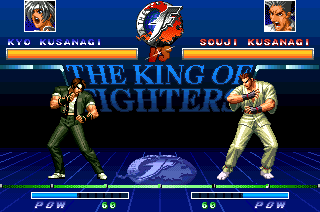 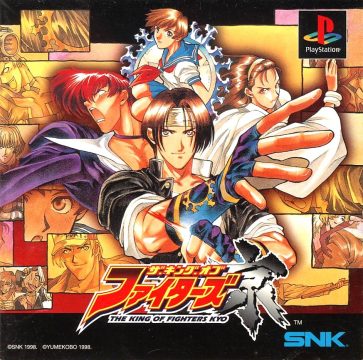 The King of Fighters Kyo is an interesting game; it’s technically an RPG, although it has more in common with a life- or dating sim than your typical Final Fantasy clone. Considering the rich storyline behind King of Fighters, it’s really no surprise that they’d eventually make a game that focuses primarily on the story and characters, but the execution is somewhat lacking. Most of this is due to the cruddy battle system. Imagine King of Fighters made turn-based, and you’ll have a vague idea of how it all works out. 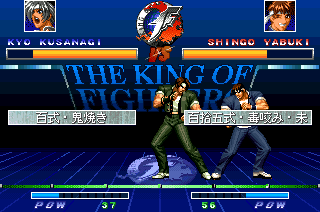 Each turn consists of up to three moves. One can move forward or backwards, guard, charge up the power meter, or execute one of numerous attacks. Once selected, the game then does a roll of the moves against the opponent’s, depending on several factors, including speed, the distance between the characters, and the move selected. Winning causes Kyo to execute the attack, while losing simply does nothing. After all of the moves are done, the turn is over and attacks are selected again. This continues until either opponent is defeated.

The major problem is that it’s nearly impossible to determine whether attacks will succeed or fail – there are plenty of factors, but the game never lets through what exactly they are. All the player can do is dodge (to increase speed) and memorize the distance of the different attacks, and hope they’ll connect. Given the haphazard nature of the system, it’s hard to make any real strategy, especially if one keeps failing moves (which also drains the power meter.) Furthermore, the whole system is slow and painfully uninteresting.

The only playable character in Story Mode is Kyo. Taking place in between KoF ’96 and ’97, the plot details Kyo’s research into his family bloodlines and his connection to the Orochi power. Along the way, he trains to become more powerful, recruits allies for the tournament, and constantly fights against that annoying bastard Iori. Moving around is accomplished by clicking on areas of a map. The quest leads to explore areas of Tokyo and Osaka, as well as parts of America and Mexico as Kyo meets all of the usual King of Fighters cast. Each character who joins has a friendship affinity to Kyo, and only by selecting the right dialogue choices – and protecting them from Iori – will you be able to maintain your buddies’ companionship. There are also several exclusive characters:

Kyo’s girlfriend. She and Shingo accompany Kyo on his adventures, although she ultimately doesn’t do a whole lot. She does appear as a playable character in Gals Fighters for the Neo Geo Pocket Color.

Kyo’s cousin. He’s quite a bit older, with a family of his own, but at one time he almost fell under control of his rage. He’s since sworn off fighting so he doesn’t flip out of control.

Souji’s wife. Aoi mysteriously disappears and is found later emanating the same purple flames as Iori. She rides a motorcycle and is also pretty hot for being your cousin-in-law.

These three jokers constantly show up to challenge you to fights. Their names are, from left to right: Shota, Junko and Kyoji. 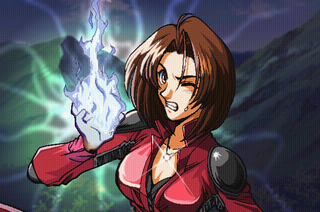 A vast majority of the game is spent listening to characters talk, as most of the dialogue is voiced. The artwork is a bit different from the fighting games, and while it’s not bad, it does have a kind of amateurish doujin quality. All of the battles feature poorly animated sprites against a practically nonexistent background. Most of the music consists of various SNK themes played through the PlayStation’s synth, which somehow sounds more artificial than the Neo Geo.

For those interested in the KoF storyline and familiar with Japanese, The King of Fighters Kyo is a cool way to learn more about the characters and their backgrounds, but ultimately it’s just a lot of plot segments connected with some awful battle scenes.