The first game in the series, The King of Fighters ’94 has a lot of innovative ideas, but it’s been completely surpassed in every aspect by its successors. Most annoyingly, the game forces the player into choosing set teams of three fighters instead of being able to choose any combination of the game’s twenty-four playable characters. This restriction was fortunately abandoned in all future games in the series, as the large variety of characters quickly became one of the draws of the game compared to its contemporaries. There’s also very little in the way of plot and cutscenes in King of Fighters ’94 compared to many other SNK fighting games, making the lack of customizable teams even more puzzling. Although most of the cast comes from the Fatal Fury and Art of Fighting series, as well as the characters brought from Ikari Warriors and Psycho Soldier, the protagonist, Kyo Kusanagi and his team, Benimaru and Goro, were made specifically for this game. Other new characters include recurring villain Rugal Bernstein and the members of the American Sports Team: football player Brian Battler, basketball player Lucky Glauber, and boxer/rapper Heavy D!. The latter was dropped for several years as they felt out of place and more appropriate for goofier fighting games. 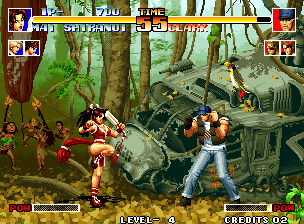 The combat here is made interesting by having the damage your moves do depend upon a gauge that fills up as you block attacks or take damage. You can also charge this gauge at any time by holding down both punch and weak kick buttons. When the meter is full your damage is increased for a time, or you can immediately expend the gauge to perform a very powerful attack (called “Desperation Moves” in the KoF series, or “DMs”). You can also perform these DMs at any time when your life is low, indicated by when your life gauge starts flashing red. 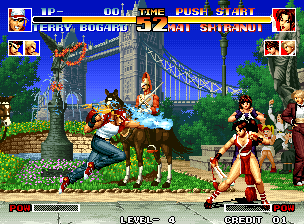 This setup is pretty typical in fighting games today, but at the time were all new, an amalgamation of concepts SNK originated in earlier titles like Art of Fighting, Fatal Fury 2, and Samurai Shodown. Players can also side step any attack by tapping weak punch and weak kick at the same time. This renders your character invincible for a brief period, but if timed incorrectly will leave you exposed. Pressing strong punch and strong kick at the same time will make your character perform a powerful single hit that will knock opponent to the other end of the screen. This has become a mainstay of the series and if timed right is used to control your opponents positioning and kill their momentum if they get too aggressive. You can also tap forward twice to hop closer to an enemy. Most interestingly, characters taken from the Fatal Fury series retain their ability to crawl along the ground instead of just walking, though this has very limited use in King of Fighters ’94. 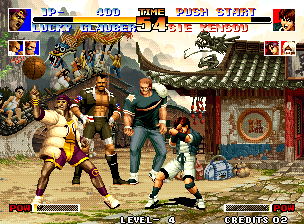 One final, obscure addition here is the team assist. The two characters you aren’t using are visible in the background while you fight, and even have little animations of reactions to every hit and knockout throughout the match. However, if your character gets caught in certain grappling attacks you can hit a button combination to have one of your partners actually jump into the battle to knock your opponent away, both giving you the upper hand and letting you avoid some of the game’s most damaging attacks. You can also use this to knock an enemy away if your character is dazed. It’s a great way to extract something relevant to the game from what would be just a cosmetic detail in a title from a lesser developer. 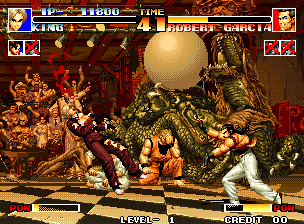 In addition to the port found on the Re-Bout release, The King of Fighters ’94 was also included in SNK Arcade Classics Vol. 1 for the PlayStation 2, PSP and Wii. Unfortunately, the emulation on the PS2 and PSP is terrible, with an extremely jerky frame rate that completely ruins the game. A port can also be found on the US release of the Orochi Saga, also for the PlayStation 2, PSP and Wii. Here, the PS2 port is significantly improved, and the Wii version is fine too, but the Wii Virtual Console version is still probably the way to go. The King of Fighters ’94 is also on the PlayStation Network’s Neo Geo Station, as well as the Wii Virtual Console, though the Neo Geo Station version also has online play. 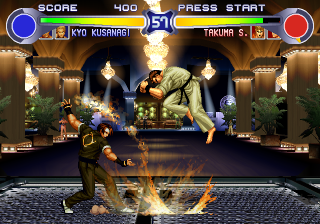 For its tenth anniversary, SNK remade their first KoF game under the name King of Fighters ’94 Re-Bout. This rerelease generated some excitement for the franchise due to the character sprites being touched up and optimized for high resolution. In execution, though, they appear simply upscaled and smoothed out with techniques used by many emulators. The actual animation remains the same as before. It’s not as good as the actual high resolution sprites seen in its contemporaries like the Guilty Gear series or Hokuto no Ken, but they at least look smoother than any game from the Neo Geo series itself. SNK also added a whole slew of nice new 3D backgrounds, many of which include cameos by characters from later games. There’s also a cool three minute long intro showing the various characters brawling, and while it’s not as good as the King of Fighters: Dream Match 1999 intro on Dreamcast, it’s a nice extra. 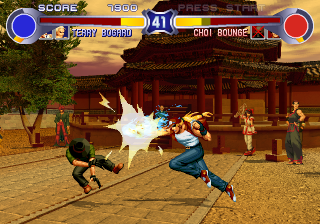 The game plays the same as KoF ’94, except for the addition of a Team Edit mode. The character select screen features new artwork done by artist Hiroaki (Fatal Fury: Wild Ambition, King of Fighters XI), but the rest of the portraits are taken from the original version. Since this is technically commemorating the tenth anniversary of the series, there are also two videos that explain the Orochi and NESTS storylines. This is a nice package for fans (and includes a great emulation of the original), but it also feels like a major step backwards. It’s hard to go back to when much better King of Fighters games were being released on various systems regularly in 2004. However, it does include online play. 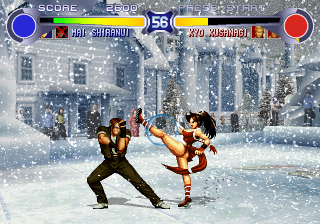 Re-bout was only released in Japan. It was originally scheduled to be ported to the Xbox for American release as well, but due to constant delays and several bugs, the game was scrapped shortly after review copies and press kits were sent out to game retailers and media. 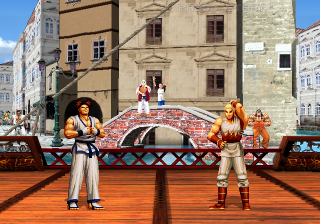 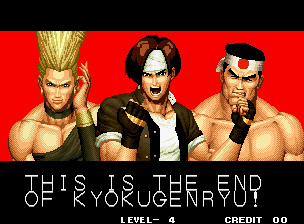 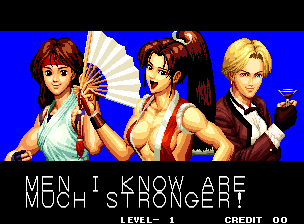 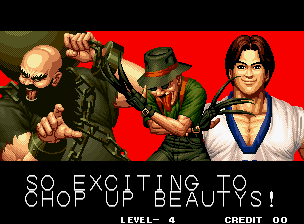 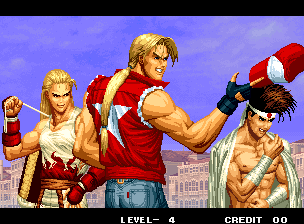