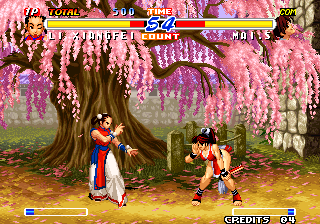 There are very few changes made from Real Bout Special to Real Bout Fatal Fury 2. The entire character roster is back with two more original characters, Li Xiangfei and Rick Strowd. There’s also a hidden boss character named Alfred. However, just like with Geese in Special, it’s obscenely difficult to even reach him. Geese is available from the beginning again, but those EX versions of characters have been removed, so there’s technically less variety in total, even though there are more different characters. It’s a dream match title again, so there’s no regard for continuity. The backgrounds are mostly all new, but the music is practically identical. There’s no story at all and not even anything in the way of win quotes (except for two player mode in the home version), but the pre-battle matchups are pretty awesome. The game announces “GET IN THE RING” before the fighter portraits collide in a massive explosion, setting the screen on fire. The intro is also the best seen since Fatal Fury 3, as it’s practically fully animated. It’s a quick video of the two new characters beating the crap out of some poor shmuck, who actually ends up as a minor character named Lao in other games. 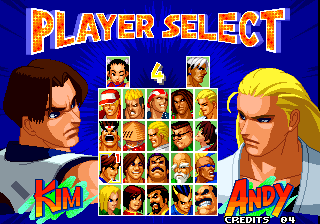 Gameplay-wise, it’s very similar to Real Bout Special, but some changes have been made. The plane switching is only used for evasion, and two characters cannot be on the background plane at the same time. It is possible to move to the opposite plane while recovering from a knockdown by pushing Up and the D button at once. Pushing the A and B buttons at once immediately before getting hit by an opponent results in a counter attack. There are are also three stages where any plane switching moves will not work. After each loss the game offers the option to make the next fight against a CPU opponent easier by reducing the difficulty setting, granting infinite super meter, or reducing the opponent’s health bar to 25%. So it’s much easier to finish the game than in any earlier entry in the series.

Real Bout Fatal Fury is the best of the classic series. Its character roster is the best in the series, and contains many fan favorites that Mark of the Wolves lacks. Its graphics and music are at least as good as any other entry in the series, or virtually any game in the genre for that matter. Most importantly, the basic fighting system is the most polished in the core series. It didn’t go out of its way to invent the series anew, but that’s a good thing in this case. Like its predecessor, its controls and physics are flawless, its combat flows perfectly, and it looks gorgeous. What little has been modified even further refines an already amazing game. 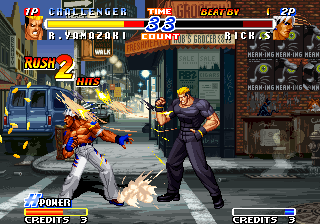 Real Bout Fatal Fury 2 never received any ports around the time of its release aside from the mandatory Neo Geo CD version. For a long time, the closest anyone got was Fatal Fury First Contact for the Neo Geo Pocket Color, which is basically “Real Bout 2 Jr.” Only in 2006 (in Japan) and 2008 (in America) it became available as part of the Fatal Fury Battle Archives 2 for the PlayStation 2.

King of Fighters 2000, The
Night mode