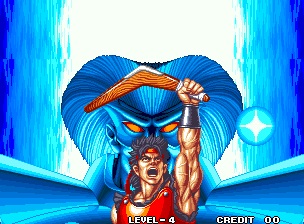 And this is how the attract sequence to Savage Reign begins – with our hero, Hayate, whacking of bunch of his opponents with his gigantic boomerang.

It’s hard to take this too seriously. In America, boomerangs just provoke images of kangaroos, quirky crocodile hunters, Paul Hogan, and that one episode of The Simpsons where Bart was flown to Australia to get booted by the country’s parliament. Maybe they’re really impressive weapons elsewehre though, because the art of Fūun-ken is the big deal behind these two Neo Geo fighters, known to English speakers as Savage Reign and Kizuna Encounter: Super Tag Battle. In Japan, their names are Fūun Mokushiroku: Kakutou Sousei (Wind and Lighting Apocalypse – Fighting Genesis), and Fūun Super Tag Battle. Unlike SNK’s more prolific series, they generally don’t get wide recognition, partly because neither was ported to home platforms during the time of their original release. It wasn’t until 2007 that both were released for the PlayStation 2 as part of the Japanese Neo Geo Online Collection, under title Fūun Super Combo. This version can in turn be found on the PlayStation Network for the PlayStation 4, which was released in internationally. 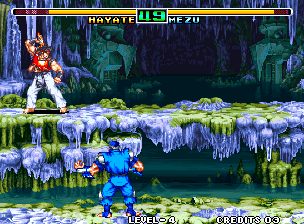 The plot is – a bunch of characters need to get together to fight an evil guy named King Lion. Each has their own crazy reason for competing. This plays out in what seems to be a futuristic, rundown version of South Town, the city from the Fatal Fury and Art of Fighting games, in SNK’s plan to loosely tie together all of its games into some kind of hugely complicated continuity. 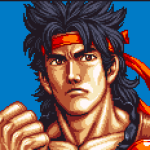 A man who takes his boomerang wielding very seriously. When knocked down, Hayate’s vest shatters and leaves him sans shirt. 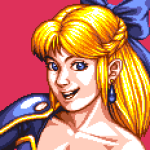 The requisite hot lady from Savage Reign dresses like a cheerleader and wields a gymnasts ball. She may as well pelt her foes with feathers, but they’re pretty damaging. 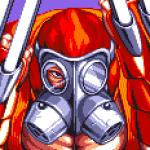 Crazy ninja dude number one wears a red suit and a gas mask. Has claws. 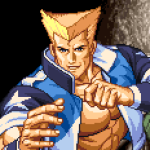 Apparently, characters in Japanese movies/games/anime can’t be American unless they’re violently American. If his name weren’t patriotic enough, Max Eagle wears stars on his pants and a red and white striped jacket. If the designers knew anything about American folklore, he’d be wielding Paul Bunyon’s Axe, but he has to settle on using an axe from that Greek fellow Hercules. 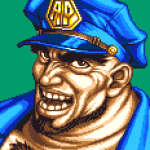 Good heavens does this guy need a chest wax. Gordon Bowman is an ugly fat policeman and practically a descendent of Edi E. from Final Fight. Wields a gigantic electric tonfa, called a “Stationfar” (??). 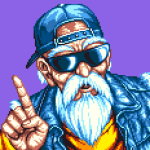 Based on his backwards baseball cap, old dude Chung would probably say things like “totally!” and “radical!” if he could speak. Apparently his hat was given to him by “The Legendary Wolf”, an obvious allusion to Terry Bogard from Fatal Fury. When his life is drained, he becomes enraged and it flies off. He would’ve been more amusing if he attacked with a walker, but he wields a flame wooden club he uses as a cane. Perhaps inspired by Master Roshi from Dragon Ball. 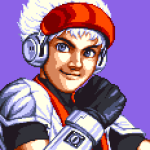 Nicola is a little kid who wears a power suit and wields a “discus of death”, which is fancy pants talk for “glowing frisbee”. He has an IQ of 600 which somehow means he’s a suitable fighter for this tournament. In a running competition with Kinta from Power Instinct for the “worst fighting game character ever”. 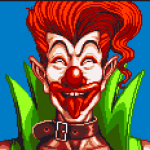 Joker is absolutely in no way related to or inspired by the Batman villain (snicker*). He’s actually part of a crime syndicate called Looly Po Po, obviously named to strike fear in the hearts of the city they terrorize. His real name is Marco Bariadrid. 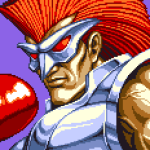 Some Capcom fighting game fans look down on SNK games because it had a final boss named Geese, naively unaware that Geese – the master of cool evilness – could Deadly Rave that M. Bison to his grave. Alas, King Lion, the penultimate foe of the Fuun games, is kind of the opposite of Geese – he may have the muscles, and the strength, and a huge sword, but that cheesy mask and hairdo isn’t doing his image any favors.

And characters from the sequel, Kizuna Encounter: 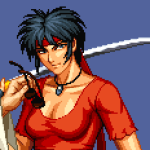 Rosa is the coolest character in the entire series – her existence is primarily what makes Kizuna Encounter so rad, and her absence is what makes Savage Reign so mediocre. She’s basically a Hispanic female version of Rambo, except with a tight red shirt and a killer katana. Per SNK standards, you can knock her shirt off under the right circumstances. 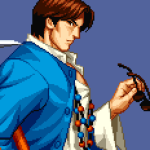 This fellow looks remarkably like tae-kwon-do Kim Kaphwan, another element vaguely tying this together with the Fatal Fury series. This Kim is just as cool as his forefather, keeping with his strong sense of justice, except he wields a giant bo. Also known as Kim Young Mok in some versions. 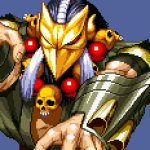 It seems like the graphic designers took the animations from Mezu/Gozu and reskinned them. But that mask looks really cool – the guy’s a crow demon, you see – and he looks remarkably more fearsome than King Lion ever could. He also seems to have a gun hidden in his wrists, beneath his claws. 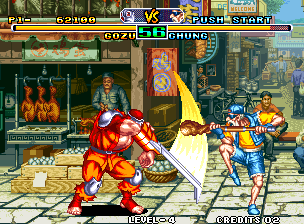 All throughout the 1990s, the arcades were packed with fighting games. After seeing that blatant Street Fighter rip-offs like World Heroes and Fighters History weren’t quite pulling in huge numbers, game publishers needed to do everything that they could to make their games stand out. SNK succeed quite well at this, by creating a number of franchises that were familiar to Capcom fans yet still distinctive enough to warrant constant playtime.

Savage Reign is one of those games that tries a bit too hard to be difficult by slapping together seemingly disparate elements from as many different places as possible. Hey, it’s got weapon-based combat like Samurai Shodown! And plane-switching like the older Fatal Fury games! Except each stage is different and occasionally you can use elements of the scenery as weapons, kinda like World Heroes! And the fast paced action of the Real Bout series! It’s dark and apocalyptic, but still has a cast of strange and wacky characters, like Power Instinct! This must’ve been someone’s concept of an ultimate fighting game, but none of these aspects really come together to a coherent whole. 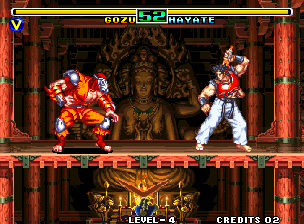 At least Savage Reign controls well. The A and B buttons are used for punches and kicks respectively, and the C button will attack with your character’s weapon. Some characters can toss their weapons by hitting A and B simultaneously. You tap the buttons for weak attacks, and press them for strong attacks, a regrettable holdover from the earlier World Heroes and Art of Fighting games. Pressing the D button allows you to jump back and forth between the two planes of scenery. Unlike Fatal Fury, the planes are on different vertical levels, allowing fighters to attack from above or below. In some stages, changing planes means jumping between elevated ledges. In others, you can hang on to wires at the top of the screen and drop bits of scenery on your opponent. Although this mechanic was interesting back when it was first introduced in Fatal Fury, it was ultimately a gimmick that added little to the experience. Its importance was wisely lessened by the time the Real Bout games rolled around, and its presence here feels like the designers of Savage Reign never learned their lesson. 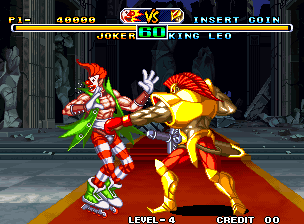 Savage Reign is a technically solid fighter, but the general lack of depth, combined with the lack of cohesive design, lame characters and forgettable music, renders this one of SNK’s lesser titles. The Neo Geo CD has an arranged soundtrack, which can be chosen in the PlayStation 2 release. The PS2 version also supports online play, although only if you’re in Japan