Long ago, before SNK was known mostly for their fighting games, they dabbled in a variety of genres, including shooters. Prehistoric Isle in 1930 is one of them, released before their Neo Geo system. As the title implies, it’s not the usual generic space battle, but something much more original. The story of this game combines two famous myths: the disappearances of ships and aircraft caused by the Bermuda Triangle, and the existence of a “lost continent” where dinosaurs, cavemen and other remains of the prehistoric era still live. The protagonists are a couple of pilots that, during the investigation of said disappearances, stumble upon an uncharted island that they dub “Greenhell Isle”, after they discover that it’s full of murderous ancient creatures.

Their mission lasts five stages and starts above the island’s jungle and waterfalls, then a battle in the skies above it (the shortest and most linear stage of all), and after that a trip through the canyons and caves of the isle. Then the biplanes inexplicably turn into submarines for what is probably the best part of the game: a journey among all the shipwrecks under the waters near the isle, with all manners of strange sea creatures popping up from and around the rusted ship carcasses. The last area is set in a huge volcanic cave, that culminates in a battle against a gigantic T. Rex… the very same one from the title screen, in fact.

Almost each stage has a mid-boss (stage 2 is an exception) and a boss, all preceded by a warning and some data: their species’ name on-screen and their height and weight. They’re not really accurate, but it doesn’t matter when the Allosaurus roars like Godzilla and the so-called “Unknown Dinosaur” looks more like a mutant, flying, fire-breathing whale than anything. Defeating them is quite satisfying because they blow up into lots of meaty chunks while the screen flashes madly; a darkly amusing touch is that, whenever one of them catches the biplane with its jaws, it doesn’t explode as usual, but instead gets munched, crunched and spat out. 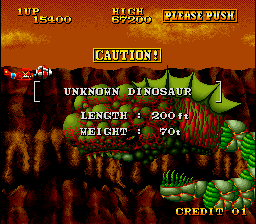 Couldn’t they have used, say, an Archaeopteryx?

Among the beasts there are also annoying neanderthals that can climb onto the biplane, making it hard to control, and you can’t shake them off, just wait for them to fall; usually, if more than one of them clings to the plane, a life is lost. They also throw hatchets every now and then and endlessly spawn from little huts that have to be destroyed. To continue with the dinosaur theme, the power ups are found in floating eggs that need to be cracked or else they’ll become just another deadly obstacle. The most common items are “S” icons for extra speed, dollar signs for a little extra score, and “P” icons. By catching the “P” icons, the plane gains a pod that, similarly to R-Type‘s own Force, can be used as a shield against enemy shots and a ram to destroy smaller baddies; unlike R-Type, however, it can’t be thrown and doesn’t need to grab additional icons for different shots.

The main difference is that the pod’s weapon changes according to its position relative to the plane: pushing the second button will rotate it clock-wise around the plane and each cardinal direction provides a different kind of shot. For example, if the pod is right above or below the plane it will shoot walls of flame that bounce on impact, the lower diagonal directions drop bombs on the ground, putting it behind the plane leaves floating mines that explode after a while and so on. It’s a novel and interesting idea, and it adds a minimum of strategic thinking to an otherwise basic and straight-forward shoot-em-up. Other power ups not mentioned before are a temporary shield, an icon that turns for a limited time all weapons into powerful ring beams that bounce off every surface, and a smart bomb that, however, detonates five seconds after having been picked up, making it not too useful. 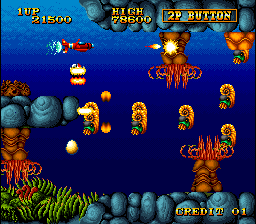 There appears to be a bit of dynamic difficulty as well: the more P icons you collect, the more powerful all the weapons become, but the enemies become more aggressive and begin to shoot bullets. And there lies the problem common to many shooters of the era: the pod’s loss or destruction (unlike R-Type‘s Force, it can be destroyed) makes the difficulty unbalanced, given that the standard shot is very weak and can’t be improved. Especially in later levels it also equals to death, since the pod is essential in fending off the popcorn enemies that come from every direction. You can’t rely too much on the eggs either, since they give randomized bonuses.

Despite this, however, the game has aged well and remains enjoyable to this day, with the pod’s multiple weapons and the designs of the levels giving a chance to experiment different play styles. The graphics are suitably colorful, detailed and varied for the time and the enemies show a degree of wacky creativity, with things like leaping giant trilobites, zombie Pteranodons (!), giant bats that carry cavemen and formless blobs that appear suddenly in the underwater stage. The BGM are also nice and give the stages a sense of urgency that goes well with Prehistoric Isle‘s general themes of adventure and escape.

Prehistoric Isle was included on the SNK Arcade Classics Vol. 0 for the PSP, which was only released in Japan. However, many of these titles were released separately in other territories as part of the PlayStation Mini series, downloadable on the PS3 and PSP. It’s a basic emulation with no enhancements or other differences outside the removal of the simultaneous two players action. 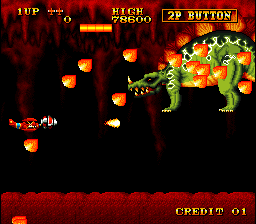 This game’s ending is also infamous: after having defeated the last boss and escaped from the volcano, the biplanes get to a bigger cargo plane, which is then swarmed by the basic Pterosaur mooks and destroyed, while a caption states that the island remained a secret… so basically there was no point to the game at all. This kind of downbeat conclusion was common in early SNK titles (see also: SAR – Search and Rescue, Beast Busters, Cyber-Lip) for some reason.