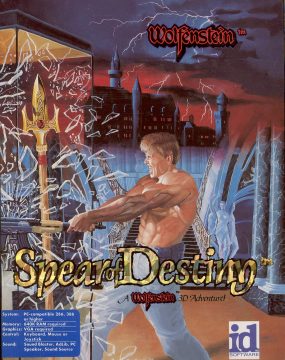 When Rise of the Triad stopped being a Wolfenstein sequel, the “true” sequel was developed in-house at id Software. Spear of Destiny could be considered more of an expansion pack to Wolf3D than a separate game, but it was sold instead as its own game, specifically for distribution at retail stores instead of mail-ordered like its predecessor. 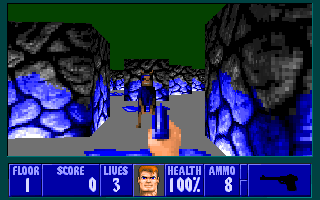 Spear of Destiny essentially acts as a prequel to the Wolfenstein saga. As BJ Blazkowicz, your mission is to locate and steal an artifact known as the “Spear of Destiny,” reputedly the same spear that pierced Jesus Christ shortly after his crucifixion, that legends claim makes its wielder invincible. Since said spear is currently in the hands of Nazi Germany, this does not bode well for the course of the War, so stealing it from them is paramount to the Allies’ continued victory. There’s a really cool effect when you finally get the Spear – the entire level, save for the chamber in which you found the Spear, fades out and is replaced with a hellish red stone. There, you must fend off evil spirits, and the final boss: the Angel of Death. When he is defeated, his final words are, “You may wield the Spear.” 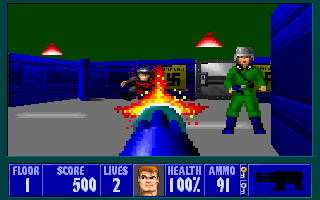 This installment plays largely the same as the game before it; the game consists of one single episode lasting for 18 (technically 19) levels, with two secret levels adding up to 21 in total. The cast of enemies is the same, but the game contains five new bosses: Trans Grosse, the elder brother of Hans and Gretel Grosse from the first game; Barnacle Wilhelm, a sailor with a rocket launcher; Uber-Mutant, who is pretty much what his name implies; the Death Knight, a cybernetic warrior with two chainguns and two rocket launchers; and finally, the Angel of Death. 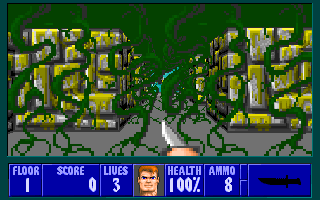 FormGen, id Software’s commercial distributor, created two expansion disks for Spear of Destiny, entitled Mission 2: Return to Danger and Mission 3: Ultimate Challenge, both marketed as “Accessory Game for Spear of Destiny” and released in 1994. In addition to replacing all 21 maps of the original game, the mission disks also replace nearly all of the textures, enemy sprites, weapons, and sound effects, lending a very different (and markedly cheesier) atmosphere. Both of the mission packs follow exactly the same story as Spear’s, with the ending being unchanged, and only the background information in the manuals providing any difference at all – basically, after you stole the Spear of Destiny at the end of the original game, the Nazis stole it back. And the same for Mission 3, wherein the Nazis steal the Spear back again and you have to claim it one last time. 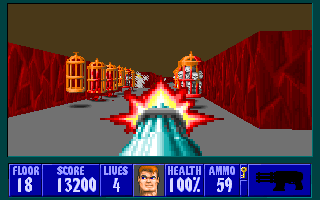 The mission packs’ level sets are decidedly more barren than Spear‘s, featuring quite a decrease in the amount of decorations, and certainly a lot less variety in the textures, considering that the colors are primarily blue. Of all the textures in the game, nearly all of them are the same shade of blue, with occasional grey to balance things out a little bit. The new graphics are of a lower general quality than id’s originals. The dogs, for example, sport a bizarre blue-and-tan fur coat and are mysteriously as tall as a normal human, while guards wear forest-green uniforms, and all of the guns are sapphire-blue. The level designs almost seem as if they weren’t tweaked and tested very much, as guard placement often has huge swarms of guards and SS troopers converging on your position after you fire one shot. FormGen’s level designers seem to favor long, twisting hallways with no doors or other such sound-blocking objects. Since Wolfenstein‘s guards can fire through each other with no difficulty, these swarms are extremely dangerous to the player. 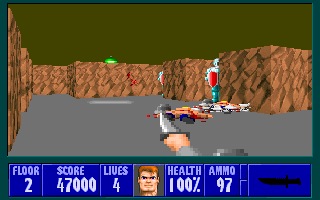 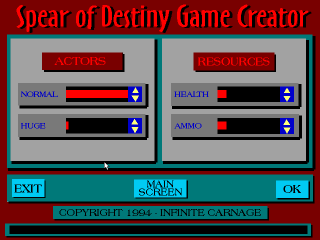 For Wolfenstein players who are just looking for more of the same, Spear of Destiny is an absolute given. But those expecting more than that will be disappointed.

Spear of Destiny never received any official ports, but it (and the mission disks) was unofficially ported to the Mac version of Wolfenstein 3D by Laz Rojas. Since the Mac version of the game contained some of Spear‘s bosses anyway (notably Death Knight and Ubermutant), the port is relatively accurate. For owners of the Macintosh port of Wolfenstein, the Spear of Destiny ports – among other, very elaborate scenarios – can be found at Laz’s Wolfenstein 3D page. 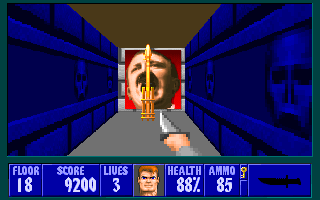