Even though Rhythm Tengoku was one of the last GBA games released by Nintendo, it still proved remarkably successful. In 2008, they finally published a sequel, Rhythm Tengoku Gold, for the Nintendo DS. Furthermore, while the original title never made it outside of Japan, Nintendo released in the game in other territories, known as Rhythm Heaven in North America and Rhythm Paradise in Europe.

The simplicity of the original Rhythm Tengoku posed a bit of a problem – how, exactly, would you evolve the gameplay beyond what was already there, without ruining what made it so involving in the first place? So, this game is controlled completely by the stylus, echoing similar rhythm games for the system like Ouendan / Elite Beat Agents. The DS is also held sideways, like Hotel Dusk and Ninja Gaiden: Dragon Sword, so the action screen is on the left, and the touch screen is on the right. 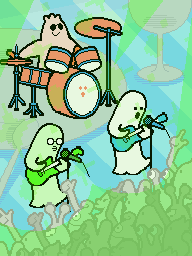 While it’s a good change of pace, the change to touch screen controls isn’t necessarily for the best. There are three basic motions – tapping, sliding and flicking. Tapping is, of course, easy enough, as is sliding. Flicking, on the other hand, requires making a quick striking motion on the touch screen. In some cases, you need to tap, hold the stylus, and then flick. You can stroke in any direction, and it doesn’t have to be a long stroke, but the game can be awfully picky about detecting your flick. Taken on its own, this isn’t a big deal, but often times you’ll need to flick several times in a row, one after another. As a result of these changes, some of the games are a little bit more complicated then simply pressing a button in rhythm with the music.

While the added depth is hardly a bad thing, the controls themselves can prove fairly troublesome. When you miss a sliding beat, it’s hard to tell what went wrong. Is your rhythm off, or did the game not pick up your flick? Furthermore, the issues tend to differ from person to person. Some have absolutely no problem with adjusting to the flicking and can play just fine. Others just need to get used to it. The thing is, the essence of Rhythm Tengoku lies in its pick-up-and-play mentality – there shouldn’t be anything to “adjust” to.

Even more frustrating, there are very, very few games where the stylus seems to provide any real benefit – nearly all of them could have been done with the standard control scheme of the previous game. The touch screen controls were undoubtedly meant to provide some differentiation from its predecessor, so it feels like more than just an expansion pack, but it shouldn’t be a barrier.

Control issues aside, the games themselves are still quality stuff. A couple of familiar faces show up in new games, and even more of them make quick cameos, but most of the characters and levels are completely new, and they’re just as endearing as before.

This one is garbage. The “Space Men” game was one of the best in the original. But instead of floating out in the middle of space and wailing on each others crotches, they’re just playing ping pong. Granted, in the second version of this level, the camera zooms out and rotates, showing them to be hovering in some great void, but it’s still not as funny. Anyway, this particular game highlights the weakness of the touch screen. It’s technically pretty easy – just hit the ball in rhythm – but hitting requires constant flicking which doesn’t always register.

One of the many, many stages where you need to keep tune with other characters. By default, your little guy starts wailing, and you need to hold down the stylus to get him to shut up. With this knowledge in hand, you need to make him sing in harmony with the other two blokes. Flicking it will cause him to yell. It’s not a great song, but the quivering, low budget animation stylus is funny, and the design of the little guys is too cute, especially with their tiny bow ties.

This game is obnoxious at first because it seemed weird, but it might grow on you, if mostly because it’s one of the few games that actually seems to take advantage of the touch screen. You need to use the stylus to slide the tail up the big lizard’s back, playing his scales like a washboard, in time with the other, tinier lizard. It’s a fun, Latin-flavored song. It’s also hilarious that the big lizard is the female. How does lizard loving work anyway? The logistics seem perplexing. Also, the heartbroken look on her face when she loses, as the tiny male lizard warms up to another, is depressingly hilarious.

Like some of the levels in the original game, you need to pay attention to the vocal cues of the singer, which tells you which patterns to go for. When she says “I SUPPOSE!” (or “KAAAAA MO NE!” in the Japanese version), you need to clap twice in rhythm, hold, then flick. Apparently this is something that they do in Japanese idol concerts, but there’s no real non-Japanese equivalent. It’s amusing, and also funny that the audience is comprised entirely of monkeys.

The song for this one is lousy, but the whole game is too weird to not like. The moai on the left makes all kinds of weird “DOO-AHH” noises, which you, as the moai on the right – apparently female, since she has a bow on her head – need to mimic. If you mess up, you get splattered with bird poop. More amusing than it probably should be, because if you screw up a lot, you just get pelted with the stuff.

In this one, you play as some kind of Chinese dude. An unseen hand pops eggs in your hand, and you need to smack your wrist, hitting them into your mouth. As you eat more eggs, your mustache grows longer. It’s actually quite difficult, mostly because the timing is unforgiving, but it’s fun, and quite amusing to watch your poor dude chuck eggs right into his face.

It might be impossible not to like this one. Taking place in a laboratory, a love potion gets chucked to your partner, who shakes it a few times, before tossing it onto you. You need to catch it, and shake it the same number of times by sliding the stylus, sending hearts into the air. One of the few other games that really takes advantage of the stylus.

This is actually an Endless Game and not an actual level, but it’s neat anyway. The idea is, there’s a distressed looking woman at a bar. As one of four slickly dressed chaps, you need to tap on glasses in rhythm to cheer her up. If you mess up, she begins to get bored, and eventually hightails it out of there. Do well, and she’ll be elated.

This one is pretty simple – a bunch of targets pop out on beat, and you need to hit them on the same beat to destroy them. The problem is, the game never indicates when it’s your turn to start shooting, so you basically need to memorize the song so you don’t accidentally miss any. The song’s cool, at least. 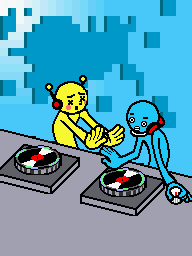 This game also seems significantly harder than the original. Maybe it’s just the touch screen mechanics or maybe the grading has just gotten harsher, but some of them get pretty brutal. Thankfully, the “coffee” option is still there if you need to skip a game just to get on to the next one. The music itself is outstanding, although honestly, the characters, songs, and levels in the first game are a bit better. This one feels like it relies a bit too much on Space Channel 5-style “Simon Says” type games, whereas the original had a better mix.

Graphically, it’s about on par with the DS game, although a scant few games use 3D visuals, and some of the remixes show off more varied graphics. The sound quality is definitely a step up, but Rhythm Tengoku was pretty damn good for a GBA game, so it’s not vastly improved. There are still a number of bonus Endless Games and toys to play with, and they’re a bit more fleshed out than they were in the original. The drum lessons are gone, replaced with guitar lessons, which aren’t nearly as complicated, and thus not quite as fun. You’re just given a handful of songs from the game, and need to repeat the riffs.

Rhythm Heaven Gold for the DS is still a fun game, and exudes the same basic likeability of its predecessor. But it’s also kind of a step back for Nintendo. The original game took the minigame concept and formulated it into something far more worthwhile. That was good! Rhythm Tengoku Gold is part of the trend of Nintendo assuming that its gimmicky control schemes work better than traditional control schemes (see: The Legend of Zelda: Phantom Hourglass and Starfox Command.) This is bad! It’s great that it’s localized into English, and despite a few songs where the vocals are a bit off, it’s generally an acceptable job, if not fantastic. Nintendo put plenty of effort into promoting it, even hiring famed pop star Beyoncé to hawk it on television, although unfortunately the game seems to have flopped. Thankfully, that didn’t stop them from localizing the third game for the Wii.