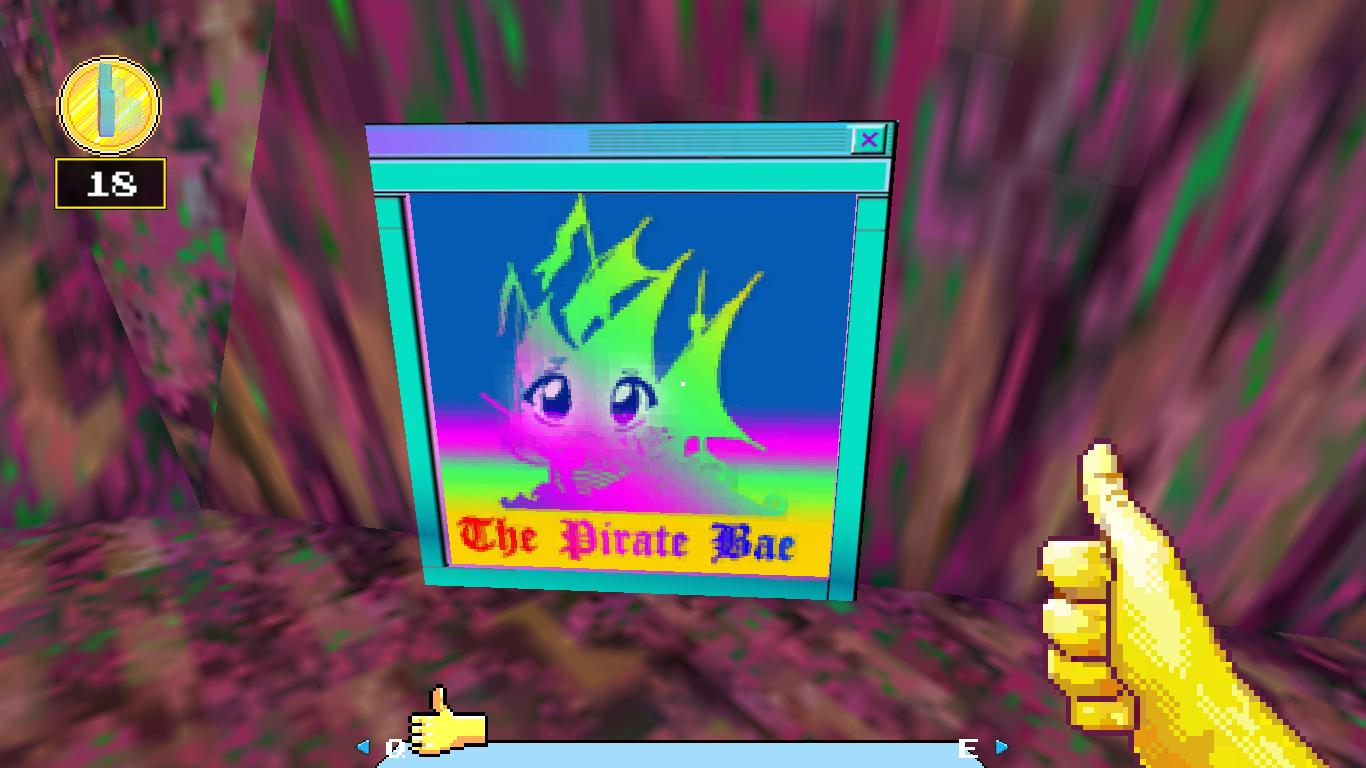 You ever hear about this thing the young adults of the internet are into called “vaporwave?” It’s this genre of music obsessed with 80s and 90s computer culture, celebrating the technology of old and expressing a sense of inevitable change and dread born from living in a dehumanizing Capitalist wasteland on the verge of annihilation. Samples are distorted into pleasing drones and unnerving moaning, sounds both joyous and anxiety inducing. Also, this subculture loves anime and memes and makes jokes about the weed number and spells things in Japanese katakana for no reason other than it looks cool. It’s the most irony poisoned art movement in existence, born from actual musical artists and quickly appropriated by chan-goers, a mash of contradicting statements and ideas that all sum up to one shared message: everything is doomed, so we might as well get some messed up laughs from it. It’s the soundtrack of a generation born into incredibly technology and increasing poverty, the ode to the dying mall, and it is one of the most interesting things the internet has ever produced. 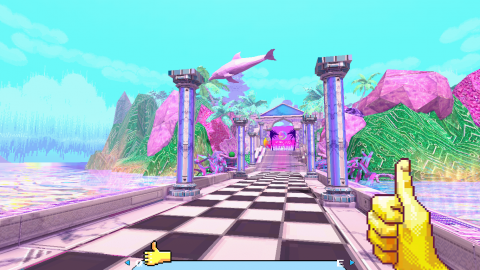 Vaporwave games all kind of suck, though. The stuff you find out there are pretty much just style jokes and psychedelic experience with no substance, which makes Broken Reality something special indeed. Developed by a small team of developers from Mexico City, which is slowly sinking at a more rapid rate thanks to the specter of climate change, this bizarre adventure game is vaporwave down to its DNA. You play as a nameless player who finds themselves in the mysterious NATEM, some sort of virtual web zone that looks like if Lisa Frank vomited over a collection of Geocities pages (worth mentioning one of the areas in the game is literally named Geocity). The only currency that matters is popularity, and different zones are locked off if you aren’t in the know enough, so the goal becomes to be the most popular user on NATEM and figure out what the deal with this place is. Mysteries abound as you uncover unnerving truths, and you also get to interact with a Sonic parody character who’s slow because he smokes weed and take a picture of a buff guy’s abs. And that’s just the first zone! 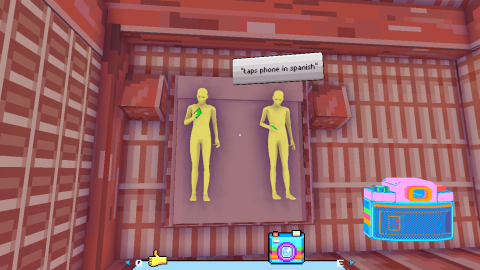 The tone of Broken Reality is constantly divided between hilarious and worrying, which is just perfect for a vaporwave game. There’s an ongoing feeling that things aren’t quite right, but simply experiencing and existing in the NATEM is a delight. There’s countless gags thrown about the environment, like parodies of internet advertising and meme culture requiring your clicks for likes, difficult to read as satire, endorsement, or just absurdity for the sake of it. Clicking ends up being one of the game’s central mechanics, as your popularity is rated based on your activity in NATEM, including liking ads. You can collect likes throughout the area and by doing various activities, but most of them will be gotten via side quests various other users hand out. Of course, many of them are ridiculous, including an amusing sequence where you do internet crimes for three criminals in Geocity that leads up to literally downloading a car. 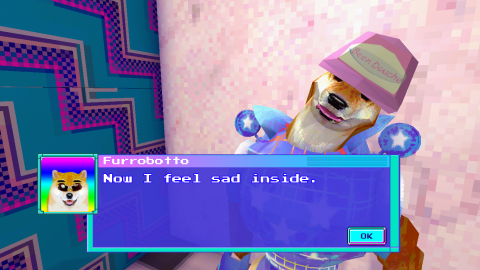 The game has an interesting contrast between look and humor, as each focuses on a different era of technology. The vaporwave look is all about old and outdated tech, mainly taking from the 80s and 90s, while all the humor is based around 00s and on internet irony culture, creating one of the most accurate portrayals of the absolute hilarious cesspit that is the age of shitposting. There are a few troubling elements, but they’re mostly background details, and with the knowledge that the team is based in Mexico, everything reads a bit differently (particularly a side quest revolving around skeleton mariachis), especially in the game’s last stretch. Broken Reality goes the whole way in its narrative, using a culture of pretty trash to tell a story that winds up hitting onto the anxieties of the millennial age, resulting in one of the most striking endings from an indie game since possibly Undertale. How much you’ll enjoy the story until then depends on how much internet irony you can take, especially since there’s an extra layer on here that doesn’t seem to have the intended consistent satirical take. 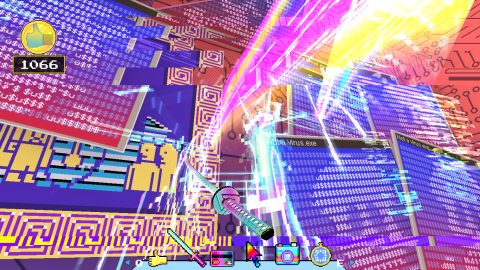 You might be thinking this game is more of a Gone Home affair, where you walk around a given space and look at stuff to decipher the story, but no. Broken Reality is a full fledged adventure game, giving you six core tools to use for puzzle solving and traversal. You start with the liker, which lets you interact with characters and ads, shaped like your basic internet thumbs-up like. You also get a sword with a technocolor trail following it to destroy virus filled adds, a camera to take pictures, the hyperlink to use as a sort of hookshot, a credit card to make purchases with, and the inventive bookmarker, which lets you mark a spot and then teleport back to it once. All of them have uses that increase your popularity, including a shopping minigame, but they’re all central for completing quests and and getting around each world. 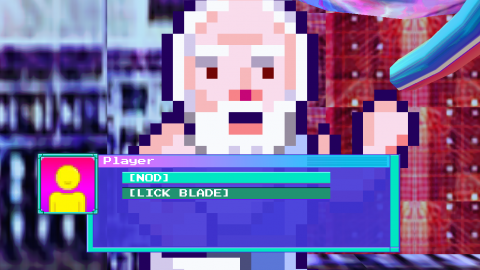 There’s a surprising amount to do, resulting in a fairly hefty seven to ten hour runtime, depending on how good you are at exploring and using your tool set. The puzzles on display are far more clever than you’d expect, especially in the last stretch. The bookmarker is a bit underused, but gets some of the most memorable puzzles in the whole game, getting a lot of use when you’re tracking down the hidden triangles to get to the last areas. The hyperlink is a bit wonky to use due to a lack of an aiming ridicule and the need to sometimes swing from from point to point quickly, but it feels exhilarating when it works. The other four tools are more situational, but the camera also gets an add-on that lets you see hidden eyes you can activate like switches, plus let you see through false walls and floors. It easily gets the biggest workout in the game. The design of every area and puzzle is surprisingly intricate, and exploration is rewarded with neat secrets and hidden gags. You’re given a sense of discovery that’s been lost in the growing trend of waypoint check-listed open world games, making great use of the much smaller spaces by packing them with details and hidden rooms. Comparing it to a Metroidvania would be apt, even if there aren’t many tools to get after the first area. 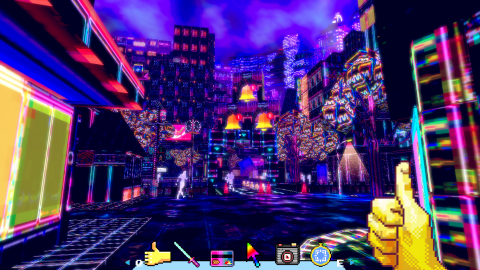 Each of NATEMs various zones also has a life of its own, and they’re all introduced with the sense of grandeur they deserve. The starting area, Domo Paradise, really gets off on the right foot, complete with rainbow colored structures and water as blocky, polygon dolphins jump over you, but every area after manages to match or one up this moment. Aquanet has you fall from a bridge and dive into the water as you see the entire area under you, while the Love Cruise makes you go in the back end and end up in a pixelated underbelly. Every single zone is instantly distinct from the last, but characters have a habit of reappearing, never matching the look of the place in even their first appearances. It all adds to the artificial vibe of NATEM, a place where anyone can be anything, and they all choose the most ridiculous, gaudy things, the oldest users using 16-bit sprites and newer ones using 3D models with flat textures. This feels like a real, lived in world, a place you can think might actually exist for a brief moment before you uncover a Mexican Spider-Man knock-off, complete with sombrero, in an alley. Imagine Ready Player One if you traded the wide-eyed nostalgia for the look of your average early 00s internet forum. 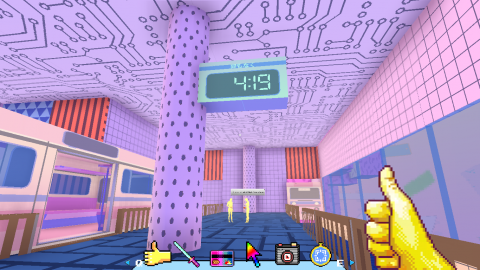 The appeal for Broken Reality is a bit limiting, but if you read Hardcore Gaming 101, you might just get something out of this. It’s brilliant in a lot of unexpected ways, while taking notes from Metroidvanias and the world of Portal-likes to create a game that’s both engaging in narrative and art design as it is in play. It’s a gem from 2018 you shouldn’t miss out on, and if you have the right sense of humor, you’ll have a grin plastered on your face with every terrible line and bizarre visual. If anything else, it’s an original.