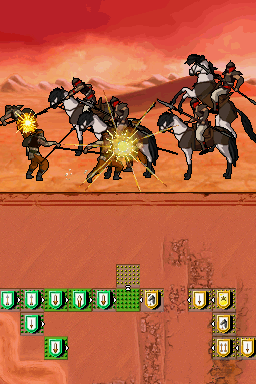 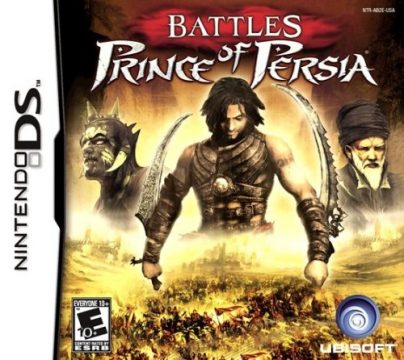 Prince of Persia had reached the height of its popularity – high time to milk the franchise with some spin-offs. Battles of Prince of Persia is supposed to take place in between The Sands of Time and Warrior Within. Babylon is under attack, but instead of going on a magic adventure on his own as he used to, the Prince hires troops to fend off the Indian Vizier’s army and other enemies.

During the rounds, Battles plays out like any other turn-based strategy war game. You move your units, take care of the positioning of your troops and attack the enemy by pointing on the main map on the lower screen. The upper one is used for status information and the mini map. The focus on stylus controls is a bit inconvenient, as you have to press up on the directional pad while dragging the stylus over the screen to scroll.

However, Battles of Prince of Persia is also a card game. Prior to each turn, you chose one card from your deck (which can be configured in the options menus). Some are simply used for movement, while others represent the usual repertoire of status buffs and spells. Each card comes with a number, which determines how many units it can be used to. So when playing a simple movement card with number 3, you can move three units in that move. There’s a catch, though: The game is further divided into “hours”, and each unit can only be used once per hour. When both players have moved all their units, the game progresses to the next hour, and a new hand of cards is drawn from the deck.

Aside from the 24 story missions, you can also engage in simple skirmishes against another player or the CPU. A map from the story missions is freely chosen for those, together with a winning condition (defeat enemy army, defeat enemy general, protect flag) and the size of your army. The graphics are functional at best, never especially pretty (aside from the hand-drawn cutscenes in mural style) or interesting.

One cannot help but wonder about the existence of this game. Who thought fans of a series of platformers would be the ideal target group for a card-based TBS? Because of the limitation of moves per turn and hour, the game is extremely slow paced, quite contrary to the fast and fluid gameplay the real Prince of Persia games players knew and loved. Even the cover partly recycled from Warrior Within screams “half-assed”. It’s definitely not a must-play title, even (or especially not) for die-hard fans of the series.

Prince of Persia: The Fallen King