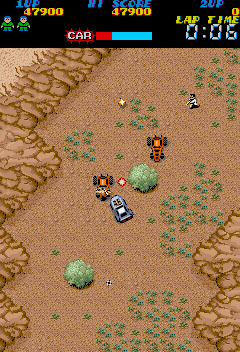 Capcom’s The Speed Rumbler is very much inspired by Mad Max and Road Warrior. Taking place in a vaguely post-apocalyptic setting, a gang lead by the evil Zapper has kidnapped all of the residents of Peace Town and taken them to their headquarters. The hero (named Top in the Japanese version, and Super Joe in the English version) takes off into his car, called a Pursuit Vehicle AMT, to save all of the hostages, which include his family. As a particularly cruel incentive, Zapper has given the hero a 24 hour time limit to make it to the goal in Zap City, after which he’ll flat out murder everyone he knows and loves. Each minute in real time translates into an hour in game time – that effectively means you have a four minute time limit for each of the six stages. 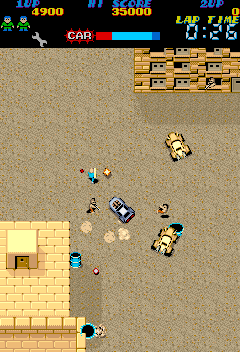 As both the time limit and the “Speed” in the title indicates, The Speed Rumbler emphasizes constant forward momentum. It’s presented as an overhead action game where you’re driving a car, but unlike other similar games with vehicles, like SNK’s Iron Tank or Konami’s Jackal, it actually controls like a car. That means you can’t just immediately change directions, but rather need to turn while still moving, not to mention dealing with momentum and inertia. While your car is technically equipped with a gun, it has a slow rate of fire, plus it’s not terribly powerful. While there are tons and tons of enemy cars that oppose you, it’s not only terribly awkward but impractical to try to engage them directly. Instead, it’s usually better just to drive past them, shooting them only when they’re in the way. Luckily, despite their aggressive behavior, they also aren’t very good drivers, so if you’re fast enough, they’ll often crash on their own.

Your car can take some damage – it tends to bounce off buildings and just gets scraped when colliding into enemies, though it’ll get immediately destroyed if you fall off a cliff or enter water – but the bad guys have weapons too, and since there’s no invincibility period after damage, you can find your car getting banged up pretty quickly. When it’s about to be destroyed, it’ll start flaming for a few seconds, and if you’re quick, you can leap out of the car and continue your journey on foot. If you manage to survive for a little while, then a friendly vehicle will drive out and give you a replacement car. 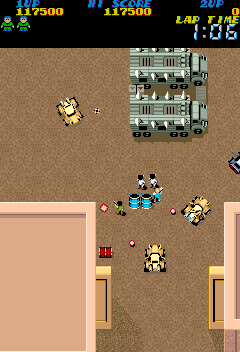 When outside of your vehicle, your machine gun has a more rapid firing rate than the gun on your car, though it’s still not really all that powerful. However, you’re still incredibly vulnerable in this state. You can take down other baddies that are on the ground, but enemy vehicles can easily run you over. Sometimes they’ll even stop and hop out to try to track you down on foot. This actually seems to imply that you can capture enemy cars whose drivers have jumped out, but nope – even attempting to will just kill you. At any rate, this concept of giving you a fighting chance to get a brand new car without actually losing a life is a cool one, but in practice, it really boils down to luck. If you’re killed in an area that doesn’t have many vehicles, then you might be able to survive long enough. But in most cases, the enemies will come too quickly for you to accomplish much of anything.

Additionally, this is only possible if your car flames out and you jump out in time. There are plenty of enemies that will kill you outright if they smash into you, regardless of your health. In the beginning stages, these are relegated to certain types of trucks (which are destructible) and lasers mounted on train tracks (which are not) but halfway through the game, you’ll come across a number of armored RVs that take too many hits to reliably destroy. In these cases, you really need to be able to fake them out by driving in one direction and then weaving around in the other, hoping you’ve created enough to space to squeeze past them. Some parts of the levels have only a single route (and others scroll upward automatically), though certain parts occasionally have multiple roads, allowing you to drive around a little to find the area with the least amount of resistance.

The time limit is no simple gimmick either. Dying sends you back to a checkpoint, which are generously spaced, but it will also deplete precious time. And if you don’t reach the end before those four minutes/hours are up, you’ll need to restart the stage. So even if you’re tenacious enough to keep pumping credits into the game (providing they aren’t disabled), you need to avoid dying as much as possible to successfully make it to the end. 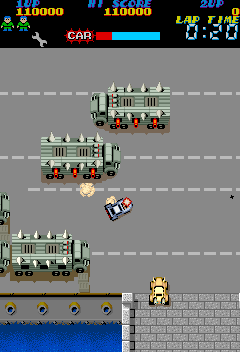 The levels are littered with several jail houses, which you can destroy by running into them. Freed prisoners will give you assorted power-ups, ranging from health restoratives, health expansions, and more powerful guns. Given the numerous enemies, it’s often impossible to completely avoid damage, so being able to minimize this long enough to reach the next a first-aid kit is often the key to getting through the stages.

The visuals don’t quite have the character of other Capcom games of the time, but considering the scale of the game – the cars are the main focus, and the human characters are tiny – they work well enough. Each of the game’s six stages have unique themes too, ranging from canyons to shipyards. The music has a slick, jazzy feel to it, which feels more appropriate for a spy movie setting than a post-apocalyptic world, but it’s still catchy.

Since the main character was renamed Super Joe for the English release, that makes this the second game to star the hero of the game Commando, with his next adventure being the arcade version of Bionic Commando. Technically these titles are unrelated in Japan, but there are some commonalities – notably, all three were directed by Tokuro Fujiwara (who also created Ghosts ‘n Goblins). You can also sorta seeing how this game evolved from Commando, just by focusing on car combat. Plus, the extra live indicators on the status screen do look like the hero of the arcade Bionic Commando, spiky blue hair and all. 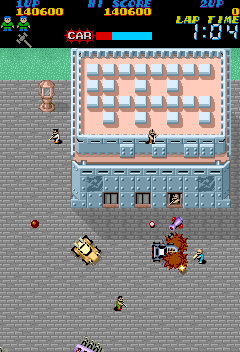 The best parts of The Speed Rumbler come from emergent moments – successfully weave through a series of tight obstacles and leaving a flaming pile of your pursuers in your wake, or surviving on-foot stand-offs long enough to get a replacement car. But these moments are ultimately somewhat uncommon, due to, as with many 80s arcade games, the high difficulty level. Enemies are so numerous, your weapons are weak, and death comes so easily, that it can easily take the wind out of your sails, especially in the second half of the game. Still, the moments where it shines, it shines brightly, and it’s a unique enough of a game to be worth experiencing.

The Speed Rumbler was scheduled to be ported to the NES, as it was featured on assorted “coming soon” lists, but it was never released. There were never any screenshots of it either, so it’s not clear how far development came along. The sole contemporary port is for the Commodore 64 – it’s competently put together, but for a game with the word “speed” in the title, it’s incredibly slow, so it’s just not very exciting. A ZX Spectrum port was scheduled but canceled. Many years down the line, the arcade version was finally made available on the Capcom Classics Collection Vol. 2 compilation (PS2/XB) and Capcom Classics Collection Remixed (PSP). This includes a version made for horizontal display, sticking the status bar on the right side of the screen, and also support turning the television (or flipping the PSP) for proper vertical display. It also appears on the Capcom Arcade Cabinet for the PS3 and X360. 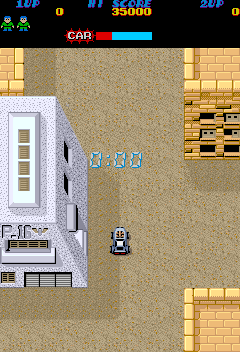 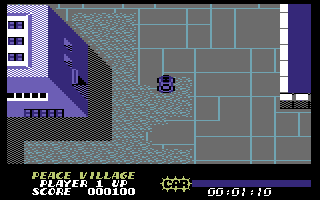