Three years passed by quietly after the release of Umihara Kawase. TNN didn’t last. They were eventually bought out by Japan Clary Business and changed their name to Jack Pot. With little money left, they decided to revisit Umihara Kawase with the support of their new publisher Xing. At first, they planned on a simple remake. That’s certainly not how it went. Umihara Kawase Shun (“Shun” meaning “in season”) is a completely different game and a fitting sequel.

It has brand-new levels which completely refocus the idea of the game. Instead of worrying constantly about enemies, the game has shifted to be much more of a puzzle platformer. Your worries don’t come from a fear of fishy murderers, but rather “how the heck am I gonna get over there?” Don’t think for a second this makes it easier.

The physics in the sequel have changed. It’s much tighter and springier with a shorter line. Once again you must trust in your fishing pole to spring, bounce, pull, and swing you around every deadly corner. This game has more bottomless pits, more spikes, more stunts, and less mercy. In other words, the perfect update for fans of the original. The new gameplay challenges you to learn every old trick in a new way. Fortunately, once mastered, this game is actually easier for pulling off stunts. And that’s a good thing too, because this sequel has no shortage of crazy challenges, especially if you take the more obscure paths.

The presentation is more polished now that it’s on the PlayStation. The graphics look as if they’ve been hand-painted, featuring much brighter animated sprites and intricate foregrounds. The floors consist of polygons rather than sprites, for a subtle 3D look, though the game is still entirely in 2D. The slight shift in perspective does make platforming feel a little less precise though. Umihara, in particular, looks quite a bit different. She’s lost the baby fat and has certainly grown quite a few years since we last met her. The silly photo-realistic backgrounds are still here, although they look a little less out-of-place, and aren’t nearly as distracting as the giant fruits, vegetables, and school supplies that still permeate levels. The music is still as cute as the first one, but it sounds a little less “canned” which is nice. The ending song even has Umihara’s voice actress sing along!

There are some minor drawbacks. The graphics are kinda repetitive. There isn’t as much variety in the enemies. In the original release of the game, it’s also a bit strange seeing the blatant product placement from Mitchell,a company that develops fishing supplies. Seriously, there are actually commercials in this game, with Umihara’s voice actress gleefully pushing sales in the most ridiculous voice imaginable. It’s jarring to say the least. 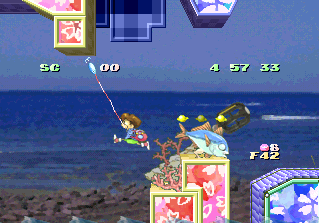 Fortunately there are some cool new features to offset any bad feelings. You can replay any field you’ve ever finished using Practice Mode. You can also record and replay your efforts with a memory card. The boss fights are also much more interesting, like a giant bucket with legs or a floating pufferfish.

A few years later, Jack Pot released Umihara Kawase Shun: Second Edition. It was the start of the Maruan series, a collaboration between studios for a series of indie Japanese games. It adds three new levels, fixes a few glitches, and deletes the voice work. The biggest difference, fortunately, is the removal of Mitchell’s commercials, and replaces them with some much preferred artwork. The influence of Toshinobu Kondo is felt far more in Second Edition; the player receives full pictures of Umi-chan as a reward for unlocking certain paths and completing certain levels. This version can be found on the Game Archives section of the Japanese PSN, for play on the PS1, PSP and Vita.

After eight long years, a studio by the name of Rocket remade the game for the PSP and had it published through Marvelous Entertainment. Made without involvement of any of the original staff, this port is, frankly, terrible. The view is in true widescreen, better than the usual stretched visuals that usually appear on the PSP. But there aren’t any new levels or obstacles at all. That’s not so bad by itself, but it doesn’t help that the game is so full of bugs that it’s nearly unplayable. It seems okay from the outset, but upon playing it for any semblance of time, it’s very noticeably that the the physics have been changed. When the game was released, fans of the PS1 games posted videos of all of the wonky ways the wire worked, giving it a bad reputation almost immediately. The game flopped. 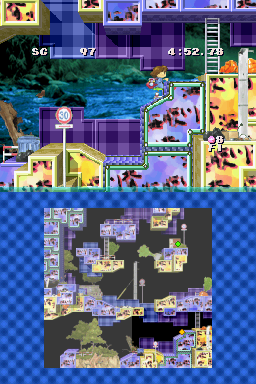 Thankfully, Kiyoshi Sakai stepped back in to produce Umihara Kawase Shun ~second edition~ Kanzenban for the Nintendo DS. It includes ports of both Umihara Kawase Shun and the original SFC Umihara Kawase. For Shun, the visuals are a little blocky due to the lower resolution, but the stages have been slightly reworked to fit in the small screen space. The physics are reproduced perfectly, and there are even a few extra levels. For the original game, it’s identical, other than losing a tiny bit of vertical screen space due to the lower resolution (224 of the SNES vs. 192 of the DS). It doesn’t feature a map screen though, instead featuring various art on the bottom screen. It’s easily the ultimate Umihara Kawase package. This was used as the basis for the Windows version, released in 2015, making it the first time the game was available worldwide. 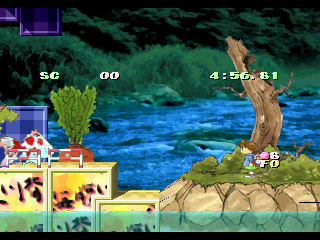 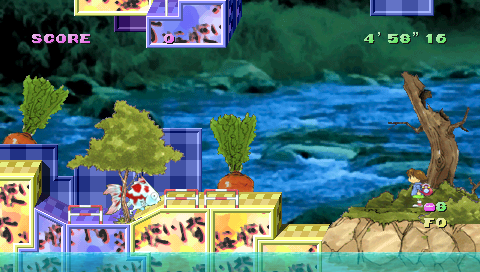 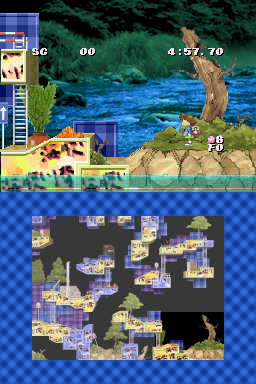