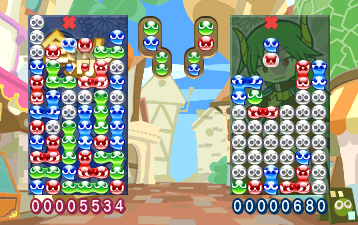 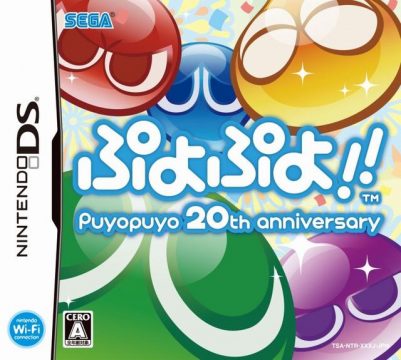 Another celebration of the series’ history, Puyo Puyo 20th Anniversary offers an experience much like Puyo Puyo 15th Anniversary. This isn’t to say it’s completely the same game, as there are a few new features and changes this time around – enough to make this game a much more fulfilling experience than its predecessor. 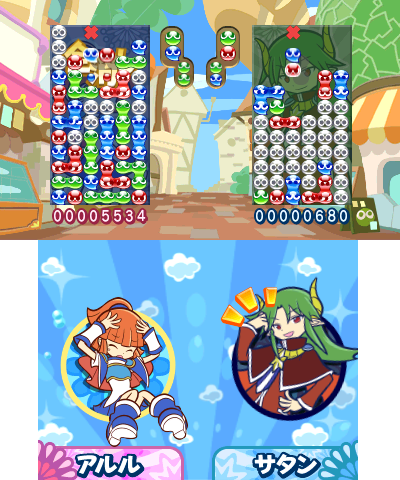 Just like Puyo Puyo 15th Anniversary, the story mode here is the main attraction of the game. This time around, though, the main goal seems to be fixing the problems that the last story mode held. For example, a failing of Puyo Puyo 15th Anniversary’s story mode was that every scenario seemed more or less the same: with all of them having about the same ending, there wasn’t really much of a motivation to complete everyone’s story. In this game, however, everyone’s scenarios are completely different. With things like changing sceneries within almost every story and different tones to each one, this story mode is easily much more of an engaging affair than its predecessor–especially with one final scenario to play through after you finish every character’s scenario. The other problem that the previous anniversary game had was the game mode selection after every round.

With it being a roulette-styled affair, picking a game mode could be frustrating at times if you didn’t get the mode you wanted, especially if it led to your failure. Here, however, you’re always given six options to choose from at will. The first three of these options always vary: most of the time, an option will correspond with what setting the characters are in, another option will correspond with the opposing character, and the third option is seemingly random. No matter the top three choices, though, the fourth and fifth options are always modes of Puyo Puyo and Puyo Puyo Tsu, while the last is a roulette. Overall, this provides a much more fair experience; you’re not only allowed to choose what mode you’d like from the options provided, and even if you don’t like the modes the game offers, you’re always able to choose from two simple modes on top of that. It’s rare that you’ll dislike the modes that the game offers, however, as this game introduces a few new creative modes into the mix. Excavation mode also returns, though the size of the board now matches the new 10×18 field established in Puyo Puyo 7. Though the change is small, it makes for much more of a longer, fair bout.

You can still place Puyo while a chain is taking place on your side of the field, which is a stark contrast from normal play where you’re forced to wait. The fact that quick drop is enabled means that, if you’re fast enough, you can quickly set up an extension to your chain as it’s taking place. No unique dropsets, and since you can move as a chain is taking place, it’s easiest to think of offsetting as a Fever style affair.

A pattern of blocks (chosen randomly) are set upon both players’ fields, forcing each player to think of how to best work with the situation they’re given on the fly with their equal footing. Puyo Puyo Tsu rules of offsetting and dropsets apply.

Basically the same as Spinner from Puyo Puyo 15th Anniversary, but instead of one whole spin, the field is split down the middle and both halves spin. Quick drop is also added.

After 10 seconds, a gust of wind blows your entire field in either a left or right direction for 10 more seconds. The only hint as to which direction it will be is how the windmill in the background spins; if it spins clockwise, the wind will go right, and the opposite for a counterclockwise spin. Unlike the Spinner modes, you don’t gain a bonus to your chains for adapting to how this mode makes you think. Since how the wind pushes your puyo can also be a bit unpredictable, this mode can seem like a bit of a nuisance. Puyo Puyo Tsu rules of dropsets, Fever rules of ofsetting, with quick drop.

Everyone’s dropset consists of four puyo instead of the standard two. Although there are no character unique dropsets, all players’ sets of puyo are completely random. Puyo Puyo Feverrules of offsetting.

After 30 puyo are cleared between each participant, a roulette in the middle of the screen begins to stop spinning and eventually chooses from a few effects. There are effects that are good which are granted to the player that pops the last few puyo that bring the counter to zero, effects that are bad which are granted to the player that doesn’t, and effects that are granted to both players. Although the mode seems interesting on paper, these effects lend to the game being quite drawn out on average: an infamous effect is one that swaps both players’ fields. Because of this, one player’s work to fill the opponents’ board can go completely and utterly wrong with little to no chance of counterplay. The strength of chains has unfortunately been reduced, which doesn’t help the slow nature that the slot brings at all. Puyo Puyo Fever rules of offsetting, Tsurules of dropsets.

Instead of being able to see just the next two pairs of puyo, you can now see four, leading to more strategy in play when planning out chains. Puyo Puyo Tsu rules of dropsets and offsetting.

Although not new modes in themselves, it’s worth noting that the main mode introduced in Puyo Puyo 7 doesn’t make a return here. Instead, the adult and child modes have been taken to be standalone modes, much like Endless Fever from 15th Anniversary. 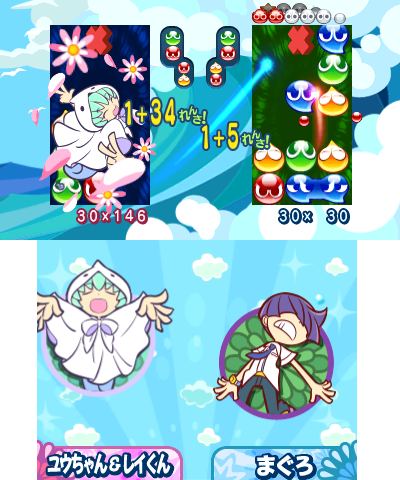 The core experience of lesson mode remains mostly unchanged from Puyo Puyo 7; there are still the same chain tutorials, as well as in-depth rule explanations for each mode. What is new, however, are two new sections inside of this lesson mode. The first is basically a mission mode, where you have as much time as you’d like to complete one task at a time with a rank given to you depending on how well you complete said tasks. Although it seems simple, the objectives themselves are quite difficult. One such objective asks you to perform at least a 7 chain that results in an all clear. Although this is possible given enough work, the next version of the objective tasks you with preforming at least a 5 chain that results in an all clear while a nuisance puyo constantly drops down at set intervals, forcing you to constantly rethink and adjust your strategy because of the random nature. All of the challenges ramp up in difficulty in a manner like this, and since you can only access a few after completing ones before them, it’s guaranteed you’ll be occupied for a while. The challenge doesn’t stop there; the other section tasks you with defeating a maximum difficulty AI in the rulesets from the original Puyo Puyo all the way to Puyo Puyo Fever, with mission mode added as well. Having the AI be set to its maximum difficulty is one thing, but there’s another challenge against you; the AI is able to drop their puyo instantly, while you’re not. This ensures that your opponent will always have their chains ready before you, which means you’ll have to play incredibly fast if you want any hope of winning. Due to the sheer difficulty of these two sections, they’re more geared towards advanced players. This is quite a good thing, as it ensures that both newcomers and experienced players get something out of the game’s lesson mode.

Finally, there’s a new mode introduced, one that isn’t shown within the story mode because it’s a strictly four player mode. The new mode – called Pair Puyo – is a very unique mode, as the main idea here is coordination. In a two-on-two battle, you and your ally work to defeat the other team with a few unique teamwork gimmicks in place. The first relates to timing: whenever someone on a team initiates a chain, the other person has a certain amount of time to follow up with a chain of their own. From that point on, a timer runs down for both of them, one that is only refreshed by more chains between the two of them. Each chain between the two counts as if it were part of a whole chain for nuisance puyo purposes, and increments a counter to let you know the strength of said chain. Since every chain during this time resets the timer between the team, it’s quite simple to make small single chains to reset the time so that the partner has more time to create a larger chain. Once the time runs out, the total strength of the chain is used to send even more nuisance puyo to the opposition, on top of the nuisance puyo already sent over because of the chains it took to get to that point. Because of this, the chains in this mode can easily get quite huge in a short span of time, making for a hectic, yet fun battle in pretty much every playthrough as you try to figure out when and how to start your chains. That’s not all, though; the second teamwork gimmick relies on coordination. If you and your teammate start a chain of the same size at the same time, the combined power of your chains will be increased dramatically. Both of these teamwork gimmicks together make for a very intense, unique style of playing Puyo with friends, and needless to say, it’s quite a blast and needs to be experienced at least once. Because of this, it’s highly recommended you try this mode out at least once, if nothing else. 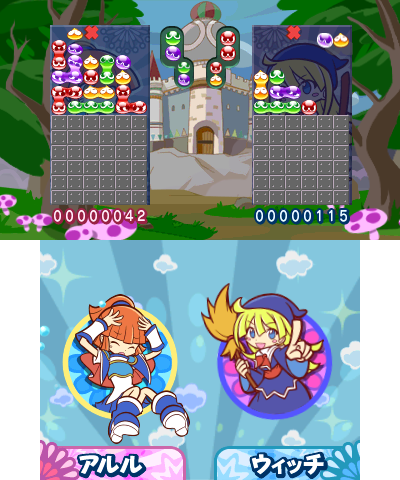 Aside from these new modes, the last new offering of this game is a shop, something that was last seen in Puyo Puyo Fever 2. Much like that game, you receive points after every time you play Puyo, and are free to spend said points here. Unlike Puyo Puyo Fever 2, however, you don’t buy items to affect gameplay. Instead, you buy cosmetics, such as skins for puyo, or alternative voices and costumes for certain characters. There’s also a section that lets you buy advice, and if you do so enough, you can receive some of the modes from Puyo Puyo 15th Anniversary, all with quick drop enabled.

Puyo Puyo 20th Anniversary doesn’t do much to shake up the formula, but on its own it’s quite the fun game to play through. The game is packed with new features and a bunch of addicting content, so if you decide to pick up the game, it’s pretty certain you’ll be playing over and over again for a long time.