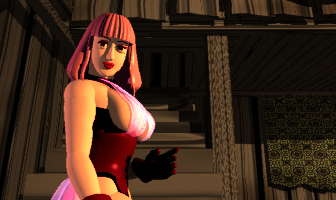 If the first Horror Tour can be considered obscure, then the existence of its sequels are down right mythical, with little to no mention of them even on Japanese websites. Zeddas: Horror Tour 2 was released in 1996 as a hybrid CD for both Windows 3.1/95 and Macintosh. This time around however there were no console ports, as had been the case with the first game when it was ported to the Sega Saturn. There was also no localisation meaning that in order to play this requires more than an adequate command of the Japanese language, as there is little to no text within the actual game and many of the characters speak in broad, colloquial Japanese. This author’s Japanese language skills are still very much elementary and the lack of accompanying Japanese subtitles in the game only compounds the limitations in understanding the plot in its entirety.

The game begins with an FMV of three sinister wizards reviving Zeddas, the Demon King you slew in the last game, as well as his legions of goblins and skeletons to reconquer Rodvydel, and you are beseeched to stop him again. It’s not exactly the most complex premise for a sequel but then again the first game didn’t exactly have much going for it in terms of plot other than the rudimentary “kill the big bad evil king of the demons”. In regards to both games what fun that can be derived from them is through exploration as well as meeting all the bizarre, outlandish characters that populate the world. Zeddas: Horror Tour 2 wastes no time in this by having you woken in the middle of a forest by the garden gnome who used to run the bar in Rodvydel castle. After a lengthy conversation he hands your a pouch of ten gold coins and runs off down the path.

The first part of the game comprises of two villages, a cave tunnel that can be passed through to either village (though for some illogical reason you can reach the opposite village by simply circumventing the cave altogether) and a forest that, like the Lost Woods in The Legend of Zelda, must be traversed in a specific order to progress to the next part of the game or you simply return to the entrance. The first village you arrive at, Tolepolo, seems completely deserted at first until you realize that the hub of all activity here and in the next village is concentrated in the taverns, where most of the NPCs tend to hang out in.

Upon meeting most of these characters you may recall seeing them from the previous game, just like our friend the Gnome; the explanation for them being here is that after you defeated Zeddas all the people who were trapped in the castle by his spell were freed. They are a robust, bawdy lot, still full of the joie de vivre that made conversing with them in Servants of Sheol both bewildering and amusing, although they rarely converse with one another, preferring to stay motionless until you interact with them. It’s a shame really that there are too few moments when you can see the characters bouncing off one another to trump each other in their idiosyncratic bizarreness. 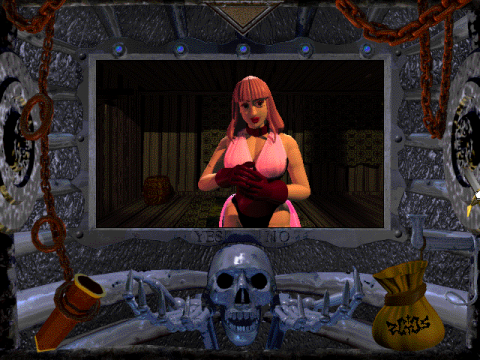 One welcome face is that of the pink haired lady that treated you to that elegant dance in Rodvydel, although you first have to save her from a trio of goblin/orcish bandits. She takes you upstairs to thank you by letting you stay in one of the guest rooms while she pours liberal amounts of sake for your delectation, though unsurprisingly you pass out before anything else happens. The following morning you are accosted by the delinquent goblins after you deprived them of their fun, which is something of a mini-boss fight.

This is perhaps the moment when you fully appreciate how much of glaring problem the combat is. In the previous game there were moments, particularly towards the end, where you could engage monsters in combat. This amounted to little more than moving an item in your inventory over an enemy and killing them outright instantly, akin to playing whack-a-mole. In this regard the brevity of the battles may have been forgiven as they were few and far between and in any case the emphasis was on exploration as opposed to killing monsters.

In Zeddas: Horror Tour 2, however, Caravan seemed to have attempted to bring combat to the fore on par with adventuring, unfortunately with disastrous results. Random encounters with enemies happen far too frequently, even in places where you have been before. It seems that you cannot advance one step without being attacked, which makes little sense when you think about it. After all, why wouldn’t enemies try to outnumber you instead of patiently waiting single-file in a cave tunnel, instead of attacking you in pairs?

These incessant fights in themselves wouldn’t be so much of problem (health regenerates with each step you take) were it not for the broken method of attacking. When combat is initiated the enemies are arranged on a horizontal plane. The player cannot immediately strike an opponent from the get-go, but must wait for one of the enemies to attempt to land a hit. Only then can the player attack by clicking on the enemy’s head, which essentially boils the combat down to ‘hit the enemy before getting hit yourself’ which becomes incredibly tedious having to patiently sit there until the enemy decides to attempt a lunge.

If that wasn’t bad enough the game is extremely finicky when it comes to registering hits, and it’s very possible to die without having landed a single one on your attackers. Lamentably this makes save-scumming an absolute requirement to achieve any meaningful progress, something that you really shouldn’t need to do in any competent Adventure game. It’s quite possible that it may be a cycle issue, as the game was being run through Windows 3.1 on DOSBox for the purpose of reviewing it, although if that were the case it doesn’t seem to affect any other aspect of gameplay than combat. 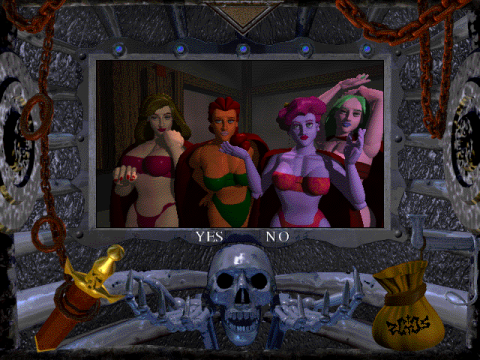 A small consolation comes in the fact that you can get better weapons which makes combat a fraction less infuriating, although you can only acquire them through progressing through the story despite the fact that there’s an armoury in one of the villages, who you frustratingly can’t buy equipment from. Certain items that are required such as the candle and sake can be bought in one store (be sure to look out for the picture of the HUD from Servants of Sheol, regrettably not for sale) and you’ll soon realise that you need more money.

Atypical of an Adventure/RPG money cannot be gained from battles but from betting on games in the inns, such as arm wrestling, insect races, and a game reminiscent of the window puzzle in The 7th Guest. While fun in themselves they slow the game down considerably as it’s necessary to grind for gold coins to buy items you need to progress through the game. Thankfully editing the save file to give you a sizeable pouch of gold is as easy as changing a number in a text editor.

The music this time round was composed by Ryuichi Sato, replacing Keiichi Sugiyama who had worked on the first Horror Tour game, as well as Angel 2 and Doukyusei Sound Memorial. An accomplished musician in his own right, Sato also worked on the soundtrack of titles as diverse as adventure games Exodus Guilty and Tantei Shinshi DASH!, visual novel Mystereet, The Case File of Yasogami Kaoru (which shares characters with Exodus Guilty), and Arthurian pinball game Crystal Caliburn. Despite the change in composer the music still retains the ambiance from the first game, heightening the sense of isolation when exploring the forests as when it did delving through the bowels of Rodvydel. In addition the soundtrack tends to become livelier in combat or when exploring a crowded inn which emphasizes the change in pace from exploring alone. 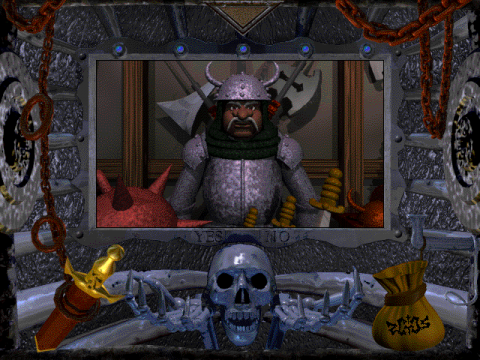 All the characters in the game speak in colloquial Japanese: you won’t find much of what they say in any textbook to say the least, with at least one character speaking in the Kansai dialect. Though this may be annoying to non-Japanese speakers their rough, familiar manner of speaking really does give the inhabitants of the game a more earthy feel.

Very much like it’s predecessor this is a game that is better to watch than it is to play, as the crippled combat mechanics make the game an exercise in masochism merely for the sake of a handful of hilarious characters and an extremely basic story.

Both Zeddas: Servants of Sheol and Zeddas: Horror Tour 2 were developed using Macromedia Director, a multimedia authoring platform that can create animations and interactive games with rich graphics and video. To put it crudely, it’s like a cross between Microsoft Powerpoint presentation and Adobe Flash. What this means essentially is that the games are made up entirely of slides, very much like Myst, and the game transitions between slides to simulate movement. Opening a save file from either of the two games using a text file editor gives a list of statistics that the game records for reference such as how much gold the player has or what items they have in their inventory but also where they are in the game i.e. which ‘scene’ they are on, represented by a co-ordinate that corresponds to the Director file in the games’ directory. It’s also interesting to note that Garage: Bad Dream Adventure, Eastern Mind and its sequel Chu-Teng, as well as Necrobius were all made using Director, which only makes the similarities between all these obscure, long-lost titles even more peculiar.

There is a third game in the Horror Tour series, Labyrinthe, which for many years had been considered lost media due to the absence of known copies only rarely been sighted in low resolution box photos on storefronts such as Amazon. However in 2018 a large leak of obscure Japanese games from a private collector/archivist was made available onto the wider internet included in this leak was the full version of Labyrinthe. As the game was not available at the time of this article no write up is able here at this time.