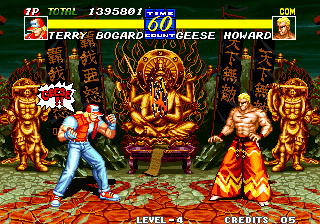 Five of the more popular characters (Terry, Andy, Joe, Mai and Geese) have been brought back for the third (technically fourth) in the series, with five new original characters (Hon Fu, Bob Wilson, Sokaku Mochizuki, Franco Bash, and fan favorite Blue Mary) added to the cast, for a total of ten playable characters. This is the lone canonical Fatal Fury game that does not involve the King of Fighters tournament. Instead, its plot concerns two brothers, Jin Chonshu and Jin Chonrei, along with a man named Ryuji Yamazaki, and their attempt to regain possession of some kind of magic object that will grant immortality. Geese Howard is revealed to have survived the events of Fatal Fury, and he intends to find these for himself. As would be expected, Terry and his pals aren’t down with that idea, and they set out to stop Geese. Several other characters with their own motivations get involved in all this craziness along the way. Ryuji Yamazaki makes his first appearance here, initially showing up as a mid boss. (When fighting him, the map screen screams “ACCIDENT!” for some reason.) In his first fight, he’ll go down after a single round, but he returns for real later near the end of the game. After him, both Jin brothers need to be taken down, one after another. None of the boss characters are playable in the arcade version. 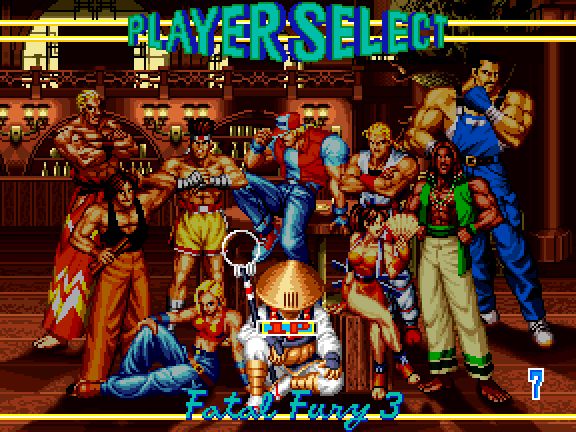 Fatal Fury 3: Road to the Final Victory (subtitled “Harukanaru Tatakai” in Japan, meaning “The Distant Battle”), is a drastically different game from its predecessors. The entire game engine has been completely rebuilt from scratch, leading to a game with a different feel than the rest of the series. For starters, it’s much faster and tighter, feeling a bit closer in speed to Capcom’s fighters. All of the combatants have been completely redrawn, too. Almost every technique from Fatal Fury Special is available again, along with several others. Characters can dash by quickly tapping the joystick forward twice, cancel a dash by tapping the joystick back while still in the dash animation, perform a short jump by very quickly tapping the joystick up, perform a longer jump by executing a jump from a dash, and air block by holding the joystick back while airborne.

The standard desperation moves are still there, complemented by new “Hidden Desperation” moves. As their name implies, they’re hidden and not normally available during play. To make these available, the player has to push Start and all four buttons as soon as “GO!” appears on screen at the beginning of a round. After the life bar begins to flash, a character specific set up has to be performed that causes the name to flash as well. Only at this point, the Hidden Desperation move can be performed, and only once each round. There are also three kinds of non-fatal finishing moves called “Finishes” that are performed by finishing the opponent with a specific move while they are on the ground. Background finishes can only be executed in the stages for Joe, Terry, Andy, Hon-Fu, and Mai. Knockout finishes can only be performed in the stages for Geese, Bash, Sokaku, Bob, Yamazaki, and Chonshu/Chonrei. Lastly, in Blue Mary’s background (Pioneer Plaza), defeating someone with a move that knocks them far into the air will cause the chandeliers to come crashing down. 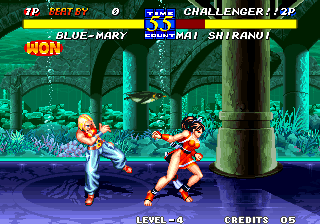 Even though the core of the game has changed quite a bit, the presentation is actually closer to the original game. At the beginning stands a choice between the first four opponents, and in between matches a little super deformed version of the player’s character zooms between different destinations on the map of Southtown. The characters taunt each other before and after combat, and the translation actually shows a bit of competent writing. There are still plenty of goofy puns and ridiculous nicknames, but it’s a step up from the average SNK fighting game. 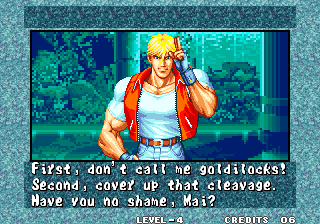 Almost all games in the series have great background art, and Fatal Fury 3 is no exception. The color palette may be pretty dull compared to the other games in the series, but it still looks pretty decent, and there are many amusing details to its backgrounds. Terry is now accompanied by a monkey, who hops up down next to his boombox, and a tiny little frog will occasionally leap into the water in Andy’s stage. In round four on Joe’s stage that alligator in the background suddenly has a bow on its head. It’s also possible to make the turtle in Joe’s stage jump by executing Sokaku’s Demon Staff Toss when the turtle is not raising its neck. Mai’s stage is an aquarium, with different creatures swimming in each round, ranging from fish to penguins to crabs, and even a surprise appearance by Jubei Yamada. Bob’s stage has cameos from SNK characters Kyo Kusanagi, Sie Kensou, and Richard Meyer, and Han-Fu’s level has a cameo from Cheng Sinzan. The intro is also amazingly animated, as it shows Geese Howard sitting down in his office chair and putting his legs up on the desk like the most badass villain in existence. The music has also been all redone, and most of it’s pretty good, especially Terry’s jazzy rock theme.

Due to fighting games not being as popular by the time that it was released, and the fact that it’s really not as good as its immediate predecessor, Fatal Fury 3 did not recreate the level of success that Fatal Fury Special had in the arcades. It did receive a few good ports though. A version was released for Neo Geo CD that plays perfectly, but has the console’s problematic loading times. This version was used for the basis of the Windows release – a series first – which is pretty decent. There’s also a version for Saturn, although since it doesn’t utilize the RAM cart, it has some obnoxious load times and cut animation. Fatal Fury 3 was also included in the Fatal Fury Battle Archives Vol 1 for the PlayStation 2.