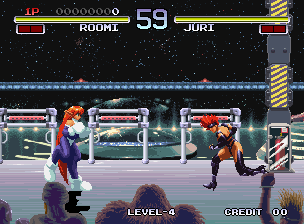 Practically every major Japanese video game publisher got into the fighting game craze in the mid-90s. Companies like SNK practically made it their full-time business. Others, like Data East, were content to churn out ridiculous Street Fighter rip-offs like Fighting History. Sunsoft – usually known amongst Western fans for their NES titles like Blaster Master and Batman – also entered the ring with three somewhat humoruous 2D fighters – Galaxy Fight and Waku Waku 7 for the Neo Geo (both released on the PlayStation 2 as part of the Neo Geo Online Collection, dubbed the Sunsoft Collection), and Astra Superstars for the ST-V. Galaxy Fight is largely ignored, but the other two are some fairly decent, overlooked titles.

Galaxy Fight pits eight warriors from across the galaxy into one-on-one combat.

The main character, who wears a robotic suit. Tip to Japanese developers: if you want your heroes to be cool, don’t have them share names with one of the Muppets.

A cute, busty anthromorphic furry-ish girl that seems to rip off Felicia from Darkstalkers.

Alvan is an intergalactic prince with a cape and a horn on his head.

This guy doesn’t even feel like he’s part of the same game – perhaps he was a reject from Art of Fighting. G-Done is some generic thug that seems to be from planet Earth.

Do you know any gigantic lizards with German names?

The one thing cooler than regular ninjas are Space Ninjas.

Yacopu is a killer bunny rabbit, plain and simple. It can also morph into a clone of your character, so it’s basically like a mirror match. He’s on loan from Trip World, a cutesy Game Boy game from Sunsoft.

The spiky haired, scantily clad final boss seems to be the inspiration for Gil from Street Fighter II.

Basically a generic old karate fighter dude, except he happens to be a super secret hidden final boss.

Bonus-kun is a huge, frowning punching bag dressed as Ryu from Street Fighter, who challenges you during bonus rounds. He has all of the same moves (a fireball, a jumping punch, and a spinning kick, which is amusing considering he doesn’t have any legs.) 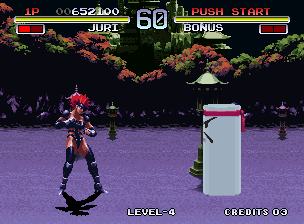 Galaxy Fight feels a bit off because it’s not entirely sure if wants you to take it seriously or not. Most of the cast feels kind of unintentionally lame, but then you get to G-Done…and then there’s no way that the developers couldn’t have realized how dumb the roster was. Things get more out of control with Yacopu, which seems to be ripped from the killer rabbit found in Monty Python and the Holy Grail. So overall it’s about 80% deadly serious, 20% totally absurd.

As the setting might suggest, each background takes place on a different planet. The backgrounds themselves are rarely inspired, but there are plenty of interesting effects that aid the visuals. The lake in Gunter’s stage casts some cool looking reflections, and there are tons of little fuzzy creatures in Roomi’s stage that inhabit both the foreground and background. The parallax effects give an impressive sense of depth, especially when the characters move apart and the camera zooms out a la Samurai Shodown. Unlike most 2D fighters, the backgrounds in Galaxy Fight loop infinitely, so you can never corner your foe.

The A, B, and C buttons are mapped to weak, medium, and heavy attacks – this kind of control mapping is pretty annoying, because you’re not sure which of said attacks are punches and kicks. Each of the characters can dash forward or backward, but beyond that, there aren’t too many fancy moves to perform. There aren’t even any super attacks, and the few combos that exist are difficult to pull off. So while the pacing is pretty fast, the movements still feel stiff. And the single player game is almost ruined by the most annoyingly cheap AI since Art of Fighting 2, which will effortlessly counter your each and every move. As a two-player game, though, it’s not at all bad – overall, it’s nothing special, but an alright game overall, and it’s worth checking out just to see how it eventually led into Waku Waku 7. 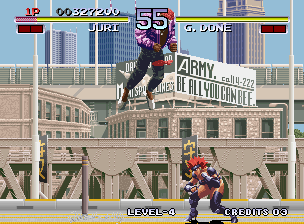 Although originally released for the Neo Geo, Sunsoft ported the game to the Neo CD, Saturn and PlayStation. All three versions used arranged soundtracks, although since the music is hardly noteworthy to begin with, it doesn’t really matter. Only the Saturn version was localized for American gamers, as the PS1 version was only released in Japan and Europe. The Japanese PS1 version is available for download in North American territories on the PSN for the PS3 and PSP, thanks to Monkey Paw Games. Although the gameplay of these home ports is intact, expect the usual minor cuts in animation and load times. The PlayStation 2 version is more or less near perfect, with a selection of original or arrange soundtracks.