What would you think is the best “generic” type of enemy in a video game? If you thought of Nazis, then you’ve probably played a Wolfenstein game. While most gamers remember Wolfenstein as a series of first-person shooters, the series originally started on Apple II and Commodore 64 systems, as a pair of almost Metal Gear-esque games written by Silas Warner, which ultimately inspired id Software’s John Carmack and John Romero to make the legendary FPS and its successors. 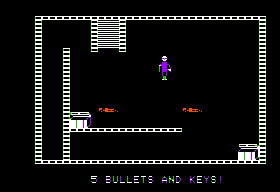 Wolfenstein remains one of the most influential series in gaming history. While id Software can mainly claim credit for most of its popularity and continued prevalence in the gaming industry, we can’t forget about Muse Software, and Silas Warner’s magnum opus. Sadly, Mr. Warner died in 2004, to kidney disease.

Wolfenstein‘s fantastical World War II setting may have contributed greatly to the creation of other famous game series such as Medal of Honor. Its first-person perspective and fast-paced action are arguably the very seed on which future titles such as Serious Sam and Painkiller are based. Wolfenstein has existed for more than 30 years, as of this writing, but it has received relatively few sequels, lasting up to eight years between entries. In between those, the fans have seen fit to carry on Wolfenstein‘s legacy. 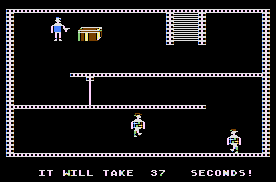 You’ve been captured by the SS and thrown into the dungeons of Castle Wolfenstein. Your mission is twofold: escape from the castle, and steal the war plans for Operation Rheingold. You are given a pistol, smuggled in by your fellow prisoner, and can also locate grenades, bulletproof vests and enemy uniforms that are scattered throughout the castle.

Written by Silas Warner in 1981, Castle Wolfenstein can be considered a very early form of stealth game. Major elements include: picking open chests to receive extra items like food and armor, avoiding patrols by staying behind them, and holding guards at gunpoint and frisking them for keys and ammo. You can only carry ten bullets and three grenades at once, both of which are extremely valuable and not to be squandered. Guards will sometimes take multiple shots to kill, especially if your aim is hindered from drinking Schnapps. Chests are littered about, as are doors. Chests must be lock picked to open and can take anywhere from 10 to 255 “seconds” to pick, where a “second” is one footstep of an onscreen guard. Shooting a box can speed along the process of lockpicking, but given that some chests contain explosives that can go off if shot, this may not be advisable. 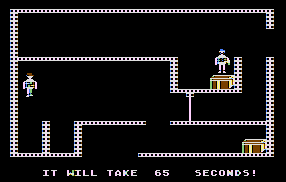 Castle Wolfenstein‘s Berzerk-esque levels are generated from scratch when the game is booted up. Unlike Rogue-like level generation, the generated castle is persistent between games and even saved to disk, unless you choose to generate a new one or shoot a chest of explosives, which kills you and generates a new castle. The level designs are simplistic maze-like constructs that generally have entrances on the edges of the screen, or stairs going up and down. If you manage to complete a castle, whether by escaping or finding the war plans and then escaping, Allied High Command may give you a promotion, which determines the difficulty of any future generated castles.

Keyboard and joystick controls are actually somewhat progressive in their execution, if a bit awkward in practice. When playing with joysticks (two of them are required), one joystick controls movement (point in a direction to face that way, and press the button to step forward), while the other controls aiming and firing (point your gun in a direction and press the button to fire). This dual-joystick setup actually predates Midway’s arcade game Robotron by a few years, perhaps making Castle Wolfenstein the first “twin-stick shooter,” even though the actual game mechanics are quite a bit slower-paced and less chaotic than Robotron and its successors. Wolfenstein also supports two paddle controllers (spin the dial to control facing/aiming direction, and press the buttons to step forward or fire the gun), or a keyboard, where the twin-stick setup is emulated by using the “QWEADZXC” keys to move and the S key to stop moving, with the “IOPK;,./” keys to aim and “L” to fire. 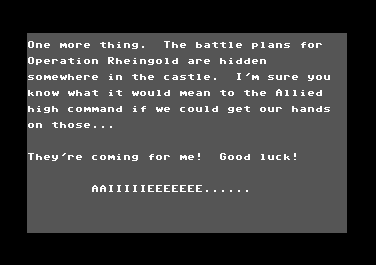 The major problem with movement in this game is that, when pressing a movement key, you will start walking in that direction and not stop unless you press the “S” key or run into a wall, which will daze you for a few moments, clouding the screen and playing an irritating high-pitched noise for about 3 seconds, while time continues to pass for any guards still in the room. Over time, you’ll get better at stopping at the correct time to avoid a collision, but accidentally hitting a wall when guards are after you can mean the difference between life and a horrible, humiliating death.

A very cool aspect of Castle Wolfenstein is that it features digitized speech, in German. It’s a bit difficult to make it all out, given the technology of the time, especially in the case of the Apple II version, but it’s very cool nonetheless. The instruction manual even includes a translation guide to help you understand what is being said. Guards will alert each other shouting, “Achtung,” and taunt you saying, “Schweinhundt,” if you run away from a room while a guard is chasing you, and surrender with, “Kamerad,” if you’ve managed to hold one at gunpoint. 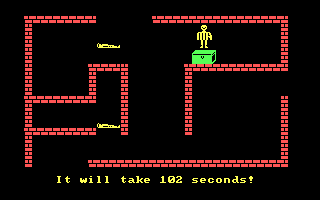 Castle Wolfenstein was first released by Muse Software on the Apple II+ in 1981. Around two years later, ports for the Atari 800 and Commodore 64 were released, and one year after that was the port for IBM compatible PCs. The Apple II version is generally the most functional, though there is no button to holster your weapon, so you must be careful, when in uniform, not to point your gun at guards, or else you will hold them at gunpoint automatically and blow your cover; the graphics are the weakest on this version, since the Apple II isn’t known for its graphical prowess. The Atari 800 version adds the holster function, but moves the fire button to the out-of-the-way function keys on the right side of the keyboard, and is the only version where the guards lack speech. The Commodore 64 version looks the best (relatively speaking, since they all use the same pixel art, just different color schemes), but is plagued with long load times between rooms and when starting the game. The PC version only supports CGA graphics (of the red-yellow-green variety), but is still capable of playing speech out of the on-board speaker, providing that the CPU speed is at the correct frequency (lest the voice pitch be too high), which is quite impressive considering that the game was designed for the very oldest IBM-compatible PCs. Another advantage of the PC version is that it does not flash the screen or squeal at you when you bump into walls, but you are still stunned momentarily (albeit for slightly less time). 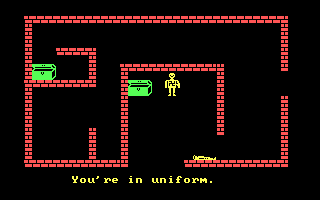 Castle Wolfenstein is a game that has pioneered far more gameplay elements than most people would think. Game mechanics from this game have been reused in games like Metal Gear (patrolling guards and threatening guards from behind with your gun), Thief: The Dark Project (lockpicking chests), stealing uniforms (Hitman), searching dead enemies for items (most PC RPGs), and random level generation. And, of course, this is the game that inspired John Carmack, John Romero, Tom Hall, and the rest of id Software to create the legendary Wolfenstein 3D… but not quite yet, because there is one other game in Muse Software’s series.

Wizard and the Princess
Night mode