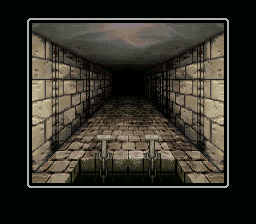 Many years have passed since the Staff of Gnilda was returned to Llylgamyn, and the city entered an era of peace afterwards. But now the whole kingdom is ravaged by natural disasters, and sages declare another artefact as the only hope. Unfortunately this treasure, a mystical orb, is in the possession of the mighty dragon L’kbreth, who has entrenched itself on the top of a volcano, and all the great heroes of the past have retired. 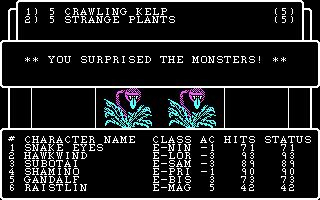 The “Legacy” in the title for the third Wizardry adventure is not just a marketing buzzword – the game actually takes place a generation after the original game, and the heroes are all descendants of those who made it through the Proving Grounds of the Mad Overlord. Yet once again characters can not be created from scratch, only imported from the previous games. But this time they are not taken as is, but converted in a “rites of passage” process that reverts them bac to level 1 and only carries over their race, class and other basic attributes. This certainly makes balancing easier, but it is a bit puzzling why new players where still locked out of the game in that way.

Legacy of Llylgamyn was designed by the “Wizardry Adventurer’s Research Group”. In reality, this was just a grandiloquent title for Andrew Greenberg’s college buddies, who had helped playtesting the original Wizardry, but never appeared in any other game’s credits again. And it is a very oddly designed dungeon they came up with. One floor almost entirely consists of a large open room, where a wall keeps pushing after the adventurers with every step they make, and the only “challenge” here is to randomly stumble upon the correct coordinates leading to some magical artifacts and the following floor. There’s also a taxi driver(?!) that can take the group back to town for 2,500 gold pieces, but this seems like a waste of money, given how easy it is to get kicked out of the dungeon by other means. 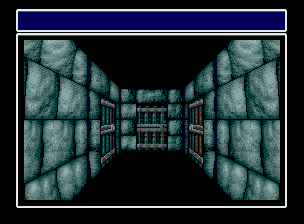 But the very concept of the dungeon is equally unconventional: The game consists of six floors like Knight of Diamonds, but a third of them is blocked to most parties without some tinkering. Alignment wasn’t a big deal in the previous games, but L’kbreth has protected two floors each with good and evil bans, so parties that contain characters of that alignment get teleported back to the city upon entering. But it is still necessary to visit them, in order to obtain the good and evil orbs to lift the ultimate spell from the uppermost part of the volcano. There are really only three ways to achieve that: Create an entirely neutral party (not good because it cannot have priests), swap the affected characters out with replacements, or keep walking around to bump into friendly monsters, because fighting them may randomly flip a good character to evil, while leaving them alone does the opposite to an evil character. (Neutral characters are strangely immune to such moodswings.) At least the floors can be visited in several different orders, so it’s only necessary to do the swap once, but with an all good/evil party, the process is still more annoying than it is interesting. 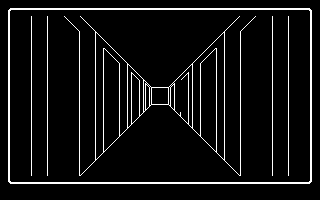 The original version of Legacy of Llylgmyn was the first episode to introduce the characteristic windows interface to the series. It looks a lot more slick than its predecessors and offers a much bigger 3D window than before. The interface elements can be toggled off to get an almost full screen view, although there are still about ten pixels of black borders on each side. The game retains the primitive wireframe graphics and four-color monsters, though. On the Apple II, the third Wizardry scenario also told the background story within the program for the first time, in form of an illustrated intro with some neat primitive pixel art. Oddly, this sequence was removed from every single port of the game, be it on consoles or home computers.