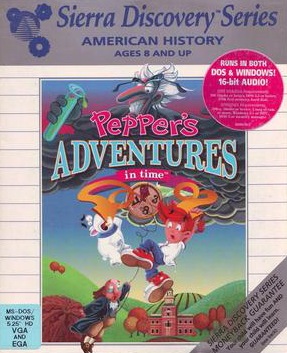 Sierra’s edutainment line of products never got much attention from adventure game fans, for mostly good reasons. EcoQuest was an alright way to teach kids about the environment and Mixed-Up Mother Goose was cute for tots, but not exactly engaging for the over-5 crowd. And yet here’s Pepper’s Adventures in Time, largely ignored for its association with these titles, but nonetheless one of Sierra’s most creative games. It is educational, technically, but it’s also written and designed at a level where practically anyone can enjoy the heck out of it. 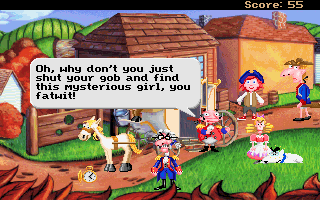 The heroine of this story is a young redheaded girl named Pepper, accompanied by her faithful dog Lockjaw. Her crazy Uncle Fred has created a time travel machine and concocted a ridiculous plan to screw up American history by turning Benjamin Franklin into a dirty, lazy hippie and thus ensure Britain’s rule over the colonies. Pepper and Lockjaw are inadvertently sucked back in time to pre-Revolution America and tasked with setting history right.

From the outset, things are clearly amiss. The Liberty Bell is seen being carried by Hare Krishnas. A man named Poor Richard is kept locked in the stockades. A tyrannical redcoat general named Pugh is illegally collecting money due to a misappropriated Stamp Tax. And Mr. Franklin himself has ditched his list of Thirteen Virtues in favor of his Doctrine of Personal Mellowness, instead promoting the values of love and peace, all while spending his days in a hot tub. After finding a disguise, Pepper begins investigating the local town and talking with the villagers. Lockjaw has also been puppy-napped by the spoiled daughter of General Pugh, and the perspective switches between the Pepper and Lockjaw as they help each other out. 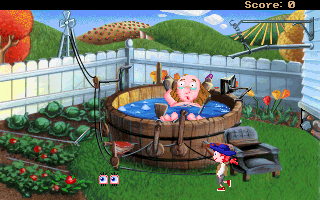 There is admittedly some shared ground with LucasArts’ Maniac Mansion: Day of the Tentacle, but in that case the colonial section was only part of the game, and it played fast and loose when it came to history lessons. Since Pepper’s Adventures in Time purports to actually teach you something, there’s a greater emphasis in separating historical fact with creative license. In addition to the standard Sierra icons, there’s also a “Truth” icon, which will explain what belongs and what doesn’t. It’s fairly obvious that Hare Krishnas have no place in an English colony, and anyone who’s read a history book knows that Poor Richard was just a pseudonym for the almanac Franklin published and not an actual person. Similarly, General Pugh and his Laurel-and-Hardy-esque redcoats definitely did not exist. But the “Truth” icon can also be used on any bits of scenery, and it discloses that, yes, women did occasionally run bakeries, and that Philadelphia did indeed consist of largely untouched farmland way back in the 18th century. It also notes that weird things like cabbage cookies didn’t exist back then, and in all rightfulness, probably shouldn’t exist now. There’s a bit of cheekiness to everything, which is part of what makes the game equally lively for adults as it is for kids.

The story is divided up into six chapters, each of which has a serious and a goofy title, like Rocky and Bullwinkle. At the beginning of each chapter you’re told the goals, along with specific things to use the Truth icon on. At the end of each chapter is a brief quiz about what you’ve learned, which affects your overall score. It feels like an unfortunate trip to a schoolroom for a game that feels much smarter than such tactics, but at least they’re easy, and you can be proud that, at the end of the day, you’ve learned about gout and Mr. Franklin’s affliction with it. Tough vocabulary words are also highlighted in red, allowing you to ask for a definition. 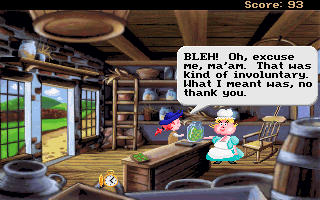 It’s also a fantastic looking title. Most of Sierra’s VGA games aimed for some level of realism, featuring rotoscoped actors and such, but Pepper’s Adventures in Time is much more stylized. It looks like one of the better Nickelodeon cartoons, with most characters having drastically misshapen proportions or other quirks. It’s also one of the few SCI-era titles that, artistically, could stand up next to a LucasArts game, which were known for their creative aesthetics. 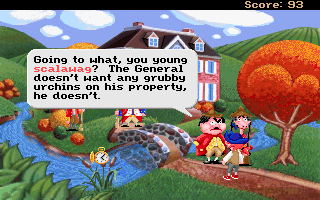 Being that the game’s technically aimed at kids, Pepper’s Adventures in Time isn’t terribly difficult, although there are still a few Sierra-style leaps in logic, like using a tomato to self-inflict a fake injury. Lockjaw’s segments are brief but enjoyable, if mostly because there are separate icons to “smell” and “bite” stuff, and the fleas in his inventory are a cute touch. The quest is quite short, as the town of Philadelphia is only a couple of screens, along with two relatively large mansions, but it’s never unsatisfying. The only quibble lies in the title – the plural “Adventures” suggests trips through multiple time periods, while it really only focuses on one. There are a few trips back to Franklin’s past as a child, and to the near future during the Constitutional Convention, but that’s about the extent of it. Like many of Sierra’s titles, it was set to be a franchise that just never took off. There was no CD release, and the disk release is quite obscure, leaving it a sadly overlooked little gem.