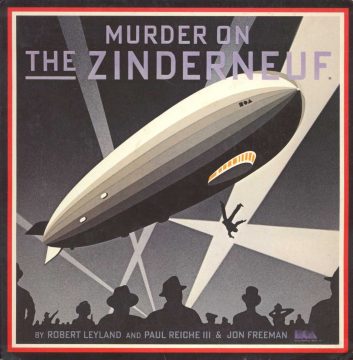 Some of the greatest innovations in adventure games come from creators who were not necessarily fond of them – take Ron Gilbert, whose point-and-click interface in Maniac Mansion was born out of his dissatisfaction with the way adventures played until then. Jon Freeman and Paul Reiche didn’t like the genre much at all. Both were rather RPG and board game geeks and had been involved with Dunjonquest titles at Automated Simulations, before going independent with Free Fall Associates and designing the chess-inspired mega hit Archon. So naturally, the main inspiration for their murder mystery adventure wasn’t Mystery House, Zork or even Deadline, but a popular old board game named Clue (Cluedo outside of the US). 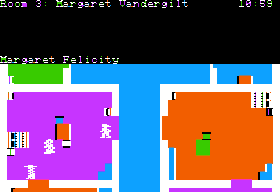 To shake things up a bit, the game does not take place in one of the common confined locations like a mansion, a ship or a train. Instead, the titular Zinderneuf is a mighty airship of the interwar period, teeming with roaring twenties pomp. Her passengers are rich industrialists with significantly younger wives, Olympian athletes, burlesque dancers, glamorous actresses, self-reliant aviatrices and various kinds of colonial adventurers. And one of them is a murderer. Luckily, there also is a detective on board, who is faced with the challenge of capturing the culprit within the next twelve hours, before the Zinderneuf reaches its destination. 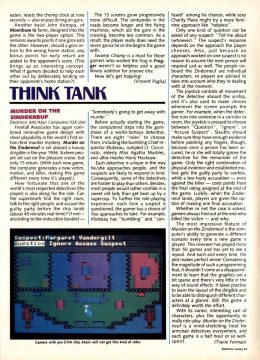 Naturally, not much of that is seen or heard in the game. The top-down view graphics are rudimentary: all furniture is little more than rectangular boxes of various colors and sizes, and the cast are pixelated silhouettes that merely hint at their appearances. The highest sensory pleasures the program has to offer are confined to the title screen, where an animated Zinderneuf flies in from the side of the screen, accompanied by a bleeping, familiar but barely recognizable melody. All you ever hear during the game are the detective’s footsteps and the constant humming of the engines.

Like most games of the era, the feel of Murder of the Zinderneuf is conveyed by the supplementary material. Published by Electronic Arts in an era when that name still meant something, Zinderneuf features a stylish and period-appropriate album cover of a human silhouette getting thrown off the airship, followed by search light and the eyes of shocked onlookers. The packaging continues the silhouette style, with telling shapes for all the suspects and detectives.

Jon Freeman has often been critical of the lack of variation in adventure games, so with Murder of the Zinderneuf he used elements from Clue to address his gripes with their unchanging nature. Each time the game is started, the program generates a new case from an assortment of eight major scenarios. These are even further distinguished by various random parameters. In a love triangle, for example, did the jealous spouse kill the mistress or her unfaithful husband? Or maybe it was the other way around? This way, there’s another victim each time, and the player can never be certain about who the murderer is or what the motive for the killing has been.

Haven’t we met before?

Contrary to typical adventures, which often focus on combining and using a multitude of items in the right situation, Zinderneuf is all about interrogation. Whenever the detective bumps into a suspect, they can either choose to ignore them, question them or accuse them of the murder – which of course is only a good idea if they can be fairly confident of their suspicion. For each interrogation, the detective needs to be wary of the tone they are going to use. (Who called LA Noire innovative?) A threatening demeanor may work with one suspect, but could cause another to wall in completely. Seductive tactics work best with suspects of the opposite gender, unless they are rather prudish, or happen to be a priest. 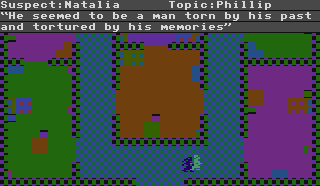 There are eight detectives to choose from, each with their own range of attitudes. Where the brutal Harry Hacksaw relies on intimidation, the “handsome devil” Jethro Knight is more successful when he lets his sex appeal do the job. All of the detectives are homages to classical crime fiction heroes. Some are a little bit subtle, but most blatantly obvious, like bumbling French chief inspector Emile Klutzeau, who has an arch-nemesis called the Lavender Leopard (painfully obviously Jacques Clouseau from the Pink Panther series), the elderly miss Agatha Marbles (a conflation of Agatha Christie and her most famous character, Miss Marple) or the Swiss Achille Merlot (Hercule Poirot) with his “preposterous mustache” and trademark cane. 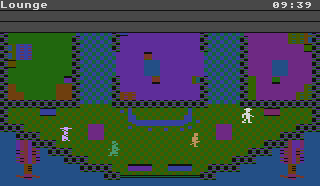 Depending on how the suspect responds to the detective’s approach, the player may choose up to three suspects to ask them about. Much of it is usual gossip, but when the character is somehow involved in the mystery at hand, they may also drop some wisdom that helps to zone in on the killer. At this point it’s imperative to keep the manual at hand, or better yet, having studied it closely beforehand. It contains in-depth profiles for all of them, including some of their relations (especially spouses, children or wards), interests, typical appearance, personal items and even what kind of tobacco they smoke. (Only in the careless decadence of the interwar period people could be insane enough to casually smoke on a giant balloon filled with highly inflammable gas.) If the detective goes along well with their interrogation partner, suspects may also be referred to by their first names, further complicating the task of keeping them all apart.

The clue to a good mystery

It’s not just all talk, though. The detective can also search the passenger’s cabins for clues, although this element feels a bit underdeveloped. Clues are found simply by walking around the rooms randomly, and there is never more than one ordinary clue per room. They usually are personal items that can be compared with the characters’ bios to get an idea who has been frequenting what rooms, which is especially informative in the victim’s cabin. They’re never used directly, though – it’s not possible to confront a person specifically with a curl of their hair found by the victim or another person’s underwear from their own room, for example. They only serve to complete the picture of the crime in the player’s head and possibly raise the chance of a confession when accusing the murderer. 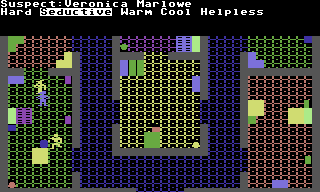 There always is one particularly damning Motive Clue, which is enough to convict the murderer on the spot, but the conditions for finding it are awfully specific: It can only be found after finding enough ordinary clues and interrogating enough suspects, but no one ever tells you how much “enough” is. It can also only be found in a room where an ordinary clue has already been found, and only if no one is there to disturb the detective, which can make for very annoying situations as the suspects all walk around the ship randomly.

All this has to be done as fast as possible, as the game runs in condensed real time. The twelve hours on display translate to only a little more than 30 minutes, making every session brief but challenging. It is possible to accuse a suspect without finding the motive clue, but when they feel there isn’t sufficient evidence to implicate them, they’ll just deny and stop talking. The game is pretty much set up for the player to fail at least a few times before getting familiar with names and characteristics of all 16 suspects and filtering the generic gossip from potentially valuable replies. 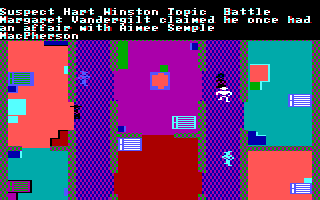 When the time is over, there is a final chance to accuse any suspect. No matter whether the guess is right or not, the murderer’s confession will be revealed (due to the high randomization the game isn’t concerned with spoilers here), and the player is awarded a detective rating depending on the time and number of false accusations, from Feeble Flatfoot to Super Sleuth (not all titles are alliterations).

Not sure the 1930s even had such garish colors…

Free Fall Associates’ Robert Leyland originally programmed Murder on the Zinderneuf for Atari 8-bit computers. It has the prettiest title screen between all versions, but in the game things look a bit drab. On the other hand, the game feels maybe a bit more cartoonish than intended, as the detective’s footstep sounds are high-pitched bleeps, which set themselves apart nicely from the constant humming of the Zinderneuf’s engines. 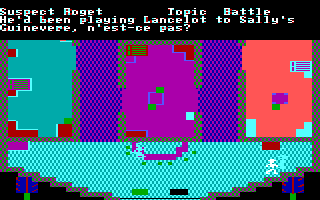 Apparently all other versions were outsourced to different development houses. Designer Software’s Apple II port’s bright colors look pretty nice on the game despite the limited palette, but it suffers in the audio department. The title music is shortened and sounds terrible, there is no engine noise, but instead the footsteps sound like a rattling motorbike engine.

The C64 version by Mission Accomplished is a major disappointment. It features a butt-ugly dirigible entering the title screen with a choppy twitching, and nothing but boring bleeps for the melody. The ingame graphics are a bit better, but the weird floor grid makes the graphics look even more abstract. Like the Apple II version, it also lacks color coding for the suspects, which makes it all the more difficult to tell them apart. The walking sounds even goofier than the original, as now each foot gets a different pitch.

Not much is done to improve the title screen on IBM PCs, either. But the version actually plays best of them all, if only because the detectives walk at a much brisker pace. But it’s not the usual lack of throttling common in old PC games, so the clock runs at the correct speed, effectively giving the player more time to solve the mysteries. The CGA graphics are insufferable on a digital display that doesn’t have composite screen artifacting, but luckily the program also supports the PCjr, which comes with a much nicer, EGA-like palette. (Making use of this in DOSBox requires manual setting in the configuration file.)

Murder on the Zinerneuf might seem awfully short and simple today, but back in 1983 its ever changing scenario was groundbreaking, which makes it all the more baffling that its approach hasn’t been explored further much at all. Jon Freeman expressed his initial surprise and tries for an explanation in an interview by James Hague:

“We tried hard to disguise our methodology, because we were initially concerned that many people would copy it. Now I think it’s just too tricky for most people to tackle. It requires planning, care, and the ability to juggle an uncomfortable number of variations, and the work can only be shared by people who really understand the system.”

The only adventure game that tried a similar shuffling of the roles in its cast is Westwood Studios’ Blade Runner from 1997, albeit in a much more limited and less game changing fashion. Real time murder mysteries have been attempted occasionally (although technically that tradition goes back to Infocom’s text adventure Deadline from 1982), most notably in Jordan Mechner’s uncompromising The Last Express, but also in softened form in Sierra’s Laura Bow games. Another detective adventure with a focus on interrogation rather than inventory juggling can be found in the form of 1986’s Murder on the Mississippi.

Links:
Electronic Games March 1984 – Think Tank Contemporaneous review.
Project 64 Has a rough machine transcript of the manual.
Dadgum Games Interview with Jon Freeman and Anne Westfall.
The Digital Antiquarian Another look back at the game. 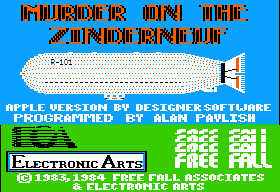 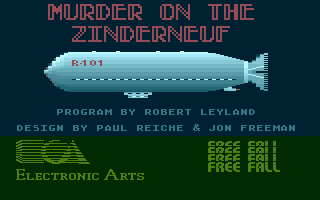 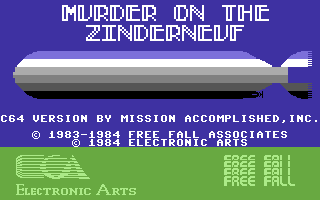 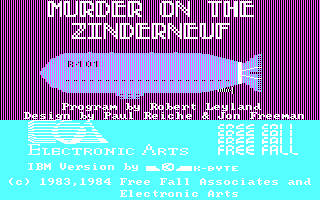 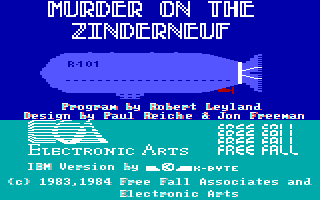 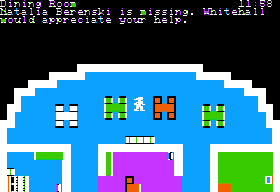 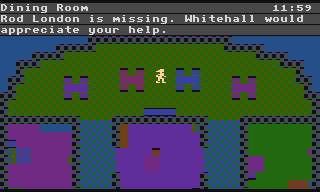 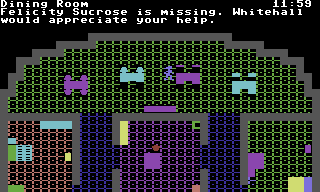 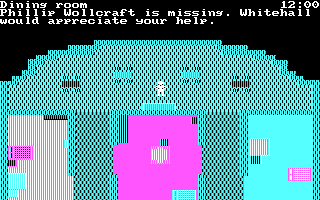 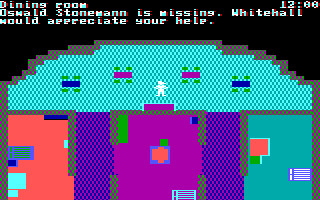