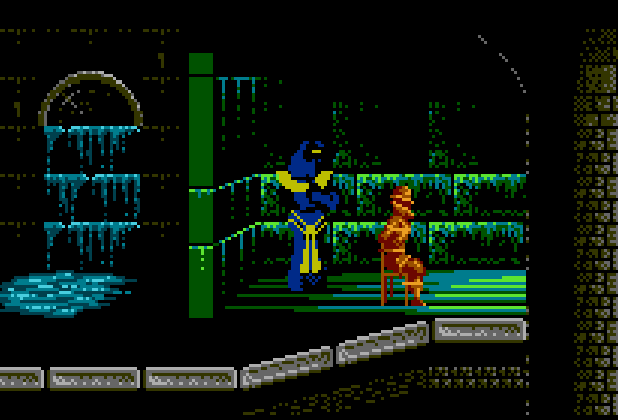 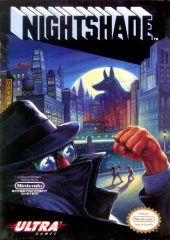 The Nintendo Entertainment System is more revered for its fast-paced action games than investigative adventure yarns, the latter of which tended to be designated for personal computers. Nintendo’s home console did indeed accommodate an adventure market, but most such titles were exclusive to Japan on the Famicom. In contrast, the NES only received a handful of six non-Japanese adventure titles, almost all of which were ports of computer. 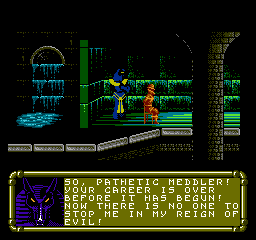 The exception is Nightshade, was developed by Australia-based Beam Software, later Krome Studios Melbourne. Nightshade was modeled as a comic book story with an unlikely protagonist fighting against a supervillain and the many criminals at his disposal. It has all the elements of a comic setting: Quirky characters, a dark city, ridiculous text, and so on. As it was specifically console-made, it attempts to strike a compromise between computer and console commonalities, with both action and exploration elements.

The story begins on a surprisingly brutal note: Metro City’s costumed protector, Vortex, is captured and unceremoniously killed by criminals. This causes crime to spiral out of control until the city’s gangs are united by Sutekh, a ruthless crime lord with a penchant for Egyptian mythology, himself dressed like the jackal-headed god Anubis (or possibly Set). Mark Gray, a bookish encyclopedia researcher, is fed up with Sutekh’s reign and becomes a vigilante under the eponymous moniker of Nightshade, a rather unorthodox hero without any superpowers, gadgets, or even a cape. All he has are a trenchcoat, hat and shades, his fists, and a keen intuition that may or may not qualify as intelligence.

Unfortunately, the instant Nightshade finishes narrating the opening monologue, he is somehow found tied to a chair by Sutekh in a dingy sewer with a nearby bomb threatening his life. He can barely move his chair to a conveniently placed candle, but it can’t burn through the ropes in time. However, moving behind a nearby wall and waiting for the bomb to explode causes the blast to miss our hero, allowing him to burn the ropes at his leisure. When free, Nightshade has to escape the sewer before he heads out into the city, and that’s when the adventure truly begins.

Nightshade‘s control scheme can certainly take a bit of time to get accustomed with it. The directional pad controls Nightshade directly. There are several commands at his disposal, and activating one causes his sprite to disappear and be replaced by a cursor, whereby putting the cursor above the desired object enacts the command selected for it. It may not be on the level of most LucasArts SCUMM titles in terms of ease of use, but clunky as the interface may seem at first, it works well enough for only having four buttons on the controller.

It’s not ideal, but the setting is what makes it such a delight. It presents an interesting graphical style that nails the comic book atmosphere. Metro City at nighttime casts an ominous mood with most areas being bordered by black and teeming with unseemly hoodlums. There’s a fair deal of night-black on most screens interlaced with fitting colors; dark greens around the grassy park areas, copper brown for some buildings and hushed blue for bricks in low-lit areas, iron gray for the sewer systems and so forth. Rarely do any of the locales look gaudy, perhaps except for the strange lavender tenements around the middle of the map.

What really sells the adventure is the audacious humor of its script and design. Nightshade himself is an affable chap who shows a lot of enthusiasm for crime-busting and attempts to get the superhero lingo down pat, though he always seems to be just a bit off-kilter. Early on, after uncovering a secret passage, Nightshade blurts out: “Great quivering enigmas with a side salad and a light tartar sauce!” He actually does not speak an awful lot compared to other adventure protagonists, but it also prevents him from becoming too obnoxious or grating. Big bad Sutekh often chews the scenery whenever he appears, proclaiming how unstoppable he is even though there’s a hint of absurdity beneath him.

There are several city citizens with which to talk, like an old man who snubs you condescendingly until you clobber a crime boss, a museum curator whom you can cheese off by destroying one of his dinosaur bone exhibits (and delight by reforming it), and even the dead superhero Vortex who has oddly-specific pre-recorded messages for your benefit, referring to you as “boy” alongside spirited encouragements. Aside from humans, you can actually talk to cats after you read certain graffiti, but inexplicably, you can speak to squirrels inherently (and one has some interesting anarchist ramblings). It also stays enjoyable with its jokes and situations, like a running gag wherein everyone refers to our hero as “Lampshade” or another erroneous name, a portrait of a man which impossibly changes exaggerated facial expressions every time you see it, accidentally stumbling into a woman’s changing booth, reading news stories like “Man eats fence – and lives!” and being turned away by barely-literate lunkheads who look like they’ve been ripped off from Dick Tracy.

Nightshade also offers an incredibly freeform approach to exploration that allows you to tackle its challenges in any order. Its open approach can be daunting and it’s not really made clear precisely what you need to do until you’ve spent some time getting acquainted with all the locales. Your eventual goal is to enter Sutekh’s hideout by collecting five scarabs and figuring out where to use them. One scarab is hidden away in the depths of the city, while the remaining four are held by a tetralogy of crime lords who report directly to Sutekh: King Rat, Goliath, Lord Muck, and the Ninja Mistress. There is also a prominent sub-goal in the game that involves finding Vortex’s old hideout and taking his four “anti-theft domes,” then seeking out four mysterious artifacts that Sutekh intends to steal and placing a dome on each of them.

For all of its investigation and exploration, Nightshade is not a pureblood adventure title, as there is a heavy action element to it in the form of hand-to-hand combat. Whenever you come across a rogue on the streets, you engage in a one-on-one (and an occasional one-against-two) fight. There are quite a few different enemy varieties to battle, ranging from goofy British gents who toss their bowlers at you to “Abnormal Irradiated Samurai Rats” who fire dubious projectiles from their nose. Tougher opponents are the female ninjas who often teleport close to you for a kick in the face, as well as a unique large-headed goon who spams headbutts to knock you out. Less conventional enemies include jackal-headed robots and mummies who can only be attacked from behind. The hit detection can be a bit sketchy at times and there’s no way to block attacks, only being able to duck under or jump over them.

Nightshade can be a rather tough game offset by an unfortunate omission of a save feature. If you know exactly what you’re doing, the game can actually be beaten well under an hour provided you don’t die. Still, even when you know where to go, you might get shredded in several fights and be in jeopardy of losing your hard-earned progress.

While you become accustomed to the game’s ins-and-outs, you will likely die often, albeit with a caveat of mercy in your favor. Nightshade handles “Game Overs” in a very unique fashion. You essentially have five “lives”, but you have to earn each life by solving a self-contained puzzle. You’re not quite dead if your lifebar runs out, but when you come to, Sutekh places you in one of his death traps to finish you off. When this first happens, Nightshade will be on a slow conveyor belt moving towards a crushing press machine. You can actually escape this fatal contraption by waiting until Nightshade’s foot is in front of the left lever and hit it to bail returning you to where you started in the sewer with full health and a minor popularity penalty. Failure to escape means a premature Game Over, naturally. The next three deathtraps each have their own solutions to escape and stave off certain doom, but there is absolutely no way to evade the fifth deathtrap, making that the definitive Game Over if it occurs. It’s somewhat cruel to make you work for your continue, but at the same time, it’s also a rather clever implementation of a standard lives system that integrates well into the overall atmosphere.

Nightshade deserved more recognition than what little it received. While technically a fairly short game with imbalanced difficulty, it had enough charm and quirk to warrant more adventures of the anti-caped hero of the night. It may have been planned as part of a series, as noted by the subtitle: “Episode I: The Claws of Sutekh.”  However, it’s also likely that this episodic subtitle was inserted for farcical purposes. Nightshade leans on the fourth wall and always takes itself lightly (save for the morbid intro), and it’s feasible that the promise of a second may have been a joke to begin with as a riff on the episodic nature of comic book serials and big-budget superhero films which often get bigger-budget sequels.  Even as it stands, Nightshade is one of the most dynamic and original NES titles out there that, despite its rough edges, should definitely be checked out by adventure enthusiasts.