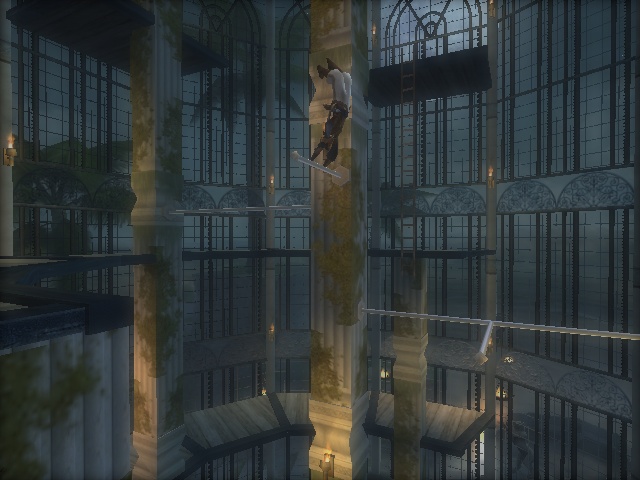 After the relative disaster that was Prince of Persia 3D, it seemed a bit odd that someone still wanted to make another 3D version of the game. Except this time, it was created by UbiSoft Montreal, and they actually turned it into an amazing game by essentially starting the franchise from scratch. The creative director of The Sands of Time was Patrice Désilets, who later created the Assassin’s Creed franchise, while Jordan Mechner contributed the story and stood by the team as an advisor.

The hero is an entirely different Prince from the old games – here he’s following his father into invading another kingdom. During the battle, he seizes a mysterious artifact known as the Dagger of Time, and in the process, releases an evil that turns nearly everyone in the castle into sand demons. This dagger allows him to control time – this allows for a whole bunch of nifty powers, but mostly importantly, you can turn back time to undo any of your mistakes.

As if that innovation alone wasn’t awesome enough, UbiSoft went ahead and rewrote all the rules of platforming – it’s rare that you actually have to jump from platform to platform. Instead, you’re given a prince that has all of the swift moves of a ninja. Each room is a puzzle of crazy architecture that you solve by running along walls, swinging on poles or climbing up columns. It gives the same sense of spiraling vertigo that the old games did fifteen years prior, but with less frustration. The incredible fluidity of the Prince’s movements are what makes this a true sequel to the original Prince of Persia.

As for the moves, the team was inspired by Hong-Kong action movies such as Crouching Tiger, Hidden Dragon and the Jet Li action films. We also watched several Capoeira documentaries – it’s a Brazilian fighting style that intricately melds martial arts with stylized dance.
– Yannis Malat, producer

The castle as a whole is a grand masterpiece, perhaps only rivaled by the architecture in Ico, and it comes as no surprise that Fumito Ueda’s creation had a direct influence on the visual direction for The Sands of Time. The camera alternates between the behind-the-back and fixed camera angles, so there’s rarely a problem in judging distances. Each location also has a scenic view you can switch to via button press. There are also a few puzzles, which mostly consist of pulling levers and pushing boxes. 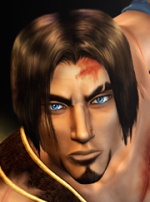 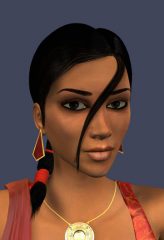 While most of the game is spent crawling up ledges, running through the usual series of dangerous traps and dashing up walls, you do spend a fair amount of time fighting monsters. The combat system feels a bit sluggish at first, but the Prince has a fair number of moves that allow him to block, react and attack enemies swiftly. His most impressive move is when he strikes enemies while leaping over their heads, for which the game likes to switch to a particularly cinematic camera angle.

All enemies have to be finished off with the Dagger of Time, lest they stand right up again. The Dagger can also be used to turn enemies into sand statues, which leaves them open to be cut in half. The only real challenge is that the game tosses a ton of enemies at you at one time, often for a period of several minutes before you get to move onto the next segment. The battles are still fun, but they’re really just intermissions between the real meat of the game.

The Prince narrates the tale through the game, and while he’s an arrogant, unlikable bastard (with a slightly lame visual design), it’s easier to find sympathy for his ally by necessity – Farah, the bow-wielding princess of India. Since the Prince belongs to the army that invaded her country, she’s sceptical towards him at the beginning, but soon the two recognize they have to work together as the only two human beings left. She acts as your guide and helps you solve puzzles, and also provides backup in combat from a distance. Surprisingly, the love/hate banter between the two is written as well as it is acted, and actually adds a little bit of emotion to the plotline. In a way, Farah finally gave Mechner the opportunity to realize his “princess and mouse” idea for the never created Prince of Persia 3 – except the princess was the mouse.
The Progenitor of Farah is not the princess in Prince of Persia 1, but the mouse. The little white mouse that, when the Prince gets himself stuck at a certain point, (…) comes through the bars of the gate, steps on the pressure plate and allows him to continue.
– Jordan Mechner, Interview with Gamespot 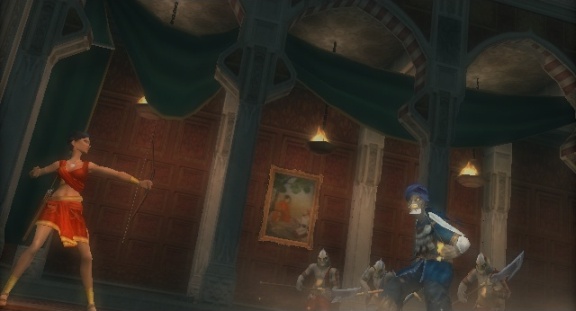 Everything about this game is so extraordinarily well done, that the only thing lacking is the anticlimactic boss fight (against the evil vizier, naturally, who schemed this all from the beginning) but even that is nullified by the awesome ending. It’s not hard to see why many publications awarded this the Best Game of 2003.

The Sands of Time originally came out for Windows PCs, GameCube, PlayStation 2 and Xbox. Gameplay and graphics are about the same among all versions, although the GameCube suffers a little bit from muffled audio. They have slightly different bonuses too – the GameCube version links up with the Game Boy Advance Sands of Time to unlock new levels in that game, as well as the Macintosh version of Prince of Persia on the GameCube. You can also unlock the first game in the PlayStation 2 and Xbox versions, but you get them by triggering a hidden switch in the game instead. The Xbox version additionally has Prince of Persia 2, but only in the North American release. In an amusing nod to the series’ roots, if you enter a code after beating the game, you can play a 3D model of the first level of the original Prince of Persia, even though it’s missing most of the hidden areas. The enemy won’t spawn either, so you can go directly to the exit, which leads to a room full of beer and a huge poster of the development staff. 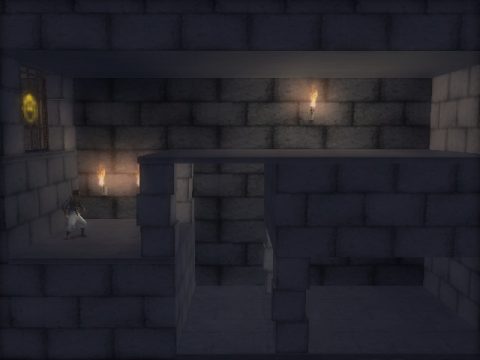 In 2010, UbiSoft decided to give The Sands of Time and its two sequels, Warrior Within and The Two Thrones, a facelift. Released as Prince of Persia Trilogy HD for the PS3, these new versions polish up many of the textures to make the game look better in HD resolutions. Although the 3D models are mostly the same, the change is very noticeable, as can be seen on the screens below. Since this compilation is a PS3 exclusive, a big bullet point for its marketing was the support of 3D hardware.

The PC version is available DRM free at GOG.com.

Since UbiSoft loves to create portable versions of their games to mirror their console big brothers, they created a tiny version of Sands of Time. Although being 2D, it ditches the play mechanics of the old games entirely. The movement is a lot like Aladdin for the Genesis, although the combat feels a little awkward. The game tries to trick you into thinking its an RPG with a few elements reminiscent of the GBA Castlevania games (hit point numbers popping out of enemies, relics to collect) although it’s mostly straightforward. 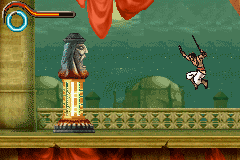 Just like in the console versions, you can rewind time, although not very far. The Prince lacks some of the crazier acrobatics of the 3D game (like being able to run up walls), which is a little saddening. It does have some features missing from its big brother – namely, some boss battles with a Griffon that was meant to be in the console versions, but excised for lack of development time. Some segments even let you play as Farah, who can use her bow to hit switches from a distance, but the end result is that you just have to play through most segments twice, once with each character. All of these co-op “puzzles” simply revolve around hitting switches, which are hardly in the realm of, say, The Lost Vikings.

While the tight controls make this far more accessible than the old games, it also ditches what make the earlier games more interesting – you’re no longer making precision jumps, but rather just running, slashing, and trying not to fall into spikes. It ends up feeling like just a regular platformer, and a relatively competent one at that, but it’s also a little on the bland side.

After their first original game, Gameloft started to program mobile versions for every major series entry UbiSoft put out. Sands of Time‘s even smaller counterpart is a more straightforward platformer than the vaguely Metroidvania-esque GBA game, but you still unlock the prince’s powers during the game, most importantly the wall run and wall jump. There are no time powers in this game (funny, with the game being titled The Sands of Time and all), however you still have to stab enemies with the dagger after they fall to dispose of them permanently. Many situations require a bit of puzzling. Most of the time the prince just has to move crates or hit back archers’ arrows, though.

At first the game is good simple fun, but towards the end it gets quite frustrating, as the controls are not exactly as responsive as they should be. Especially passages that force you to do tenfold wall jumps are extremely aggravating, as it simply doesn’t work that reliably. Alas, the game is rather short, so the joy doesn’t last long before these frustrating passages begin. 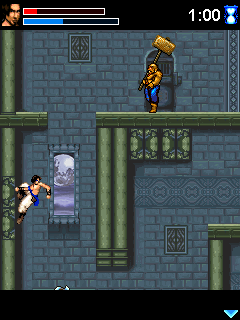 There are also screenshots of this game around that show a different interface and different levels than the game reviewed, which may either originate from another version or an unreleased beta. It’s hard to make sure with these mobile releases that differ a bit on every other device.