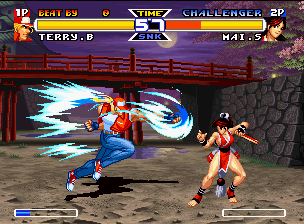 This game’s title is a little bit misleading – the “Special” seems to imply that, like Fatal Fury 2, this is just a mere upgrade of Real Bout. Not so – there are plenty of additions and improvements, enough to justify it as an “almost” sequel. For starters, the game’s gotten another visual overhaul, with completely redrawn sprites for a number of the characters. The new style is much brighter and comparable to the anime style of Street Fighter Alpha. The backgrounds are all new too, and there are many more of them as well, compared to the paltry five arenas in Real Bout. It’s not quantity over quality, though – they look as good and are as detailed as ever. Several characters have their own special animation a perfect win, and there are a lot of special fight intros for specific character match-ups. Familiar faces from previous Fatal Fury installments fly across the background of the beach level, and hitting the palm tree in that same level can cause a crab to fall out of it. Most of the music is completely new too, and it’s even better than its predecessors. Terry gets an arrangement of his original music from Fatal Fury 2, Blue Mary gets a snazzy saxophone theme, and Mai gets an upbeat Japanese-style song, far cheerier than her previous themes. The announcer is also particularly chatty, especially notable for his quote “Hey, how’s it going dude? Choose your favorite character!” at the character select screen. 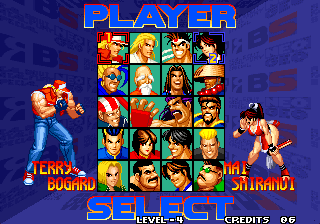 The character selection is also a bit larger. Tung Fu Rue, Wolfgang Krauser, Cheng Shinzan, and Laurence Blood are all back, for twenty different characters in total. However, Geese has been made a secret boss character who can only be reached by meeting completely absurd conditions. This is technically because he’s “dead” – he even appears with a halo around him. He does become playable after he is beaten, though. There are also hidden “EX” versions of four characters as well, so there’s technically twenty-four characters to choose from. It’s a dream match title this time out, so there is no plot at all, and no rhyme or reason to these characters beating each other up.

Very few changes have been made to the basic gameplay, but what has been changed has greatly improved on an already excellent game. Recovering from a knockdown is still possible, but only after H. Power is activated. Ring outs have been removed entirely, but there are still walls to destroy in each stage except Geese Tower. If a wall is destroyed, opens up a slightly larger playing field. It’s sad that the amusing ring outs from Real Bout are gone, but there are still some nice touches, like the panda bear in Tung Fu Rue’s stage that gets pissed off if the combatants bother him.

Other mild tweaks have been made, which greatly improve on the feel of the game. There are even more combo possibilities than before and anybody with even mild experience with fighting games can easily get into its combo system and consistently perform simple combos, but it’s never reliant on combos either. The three planes have been downgraded to two. Characters still move between planes by dashing, which works better than any other variation of the system in the series. This fixes any pacing problems that existed in the two prior installments, which combined with speed and controls that are at least as good as any other Fatal Fury game, leads to fights that flow better than in any other 2D fighter. Also, beating the CPU is still definitely a challenge, but the difficulty has been made much more reasonable than any of the previous games. 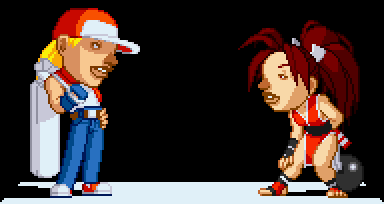 Real Bout Fatal Fury Special was soon ported to the Saturn and Neo Geo CD. The Saturn version, like Real Bout Fatal Fury, uses the RAM cart. There still is some loading (complete with some really spooky looking super deformed sprites before two player matches), but otherwise plays pretty well, despite the scratchy sound effects. Both versions contain a special ending, which is a music video starring Blue Mary, featuring a vocal rendition of her theme song. The Saturn version also has an “Original” mode, where the CPU randomly challenges the player to additional battles, which is supposed to emulate the experience of being in an arcade. Pretty strange! The PlayStation 2 once again got the game on the Fatal Fury Battle Archives 2, which is a straight port of the Neo CD version. Unfortunately, the American version is once again missing blood effects.

There’s a port for the Game Boy by Takara called Nettou Real Bout Garou Densetsu Special that’s missing six characters and all the EX character versions. This version uses miniaturized renditions of the sprites, rather than the super deformed versions found in the previous Game Boy game. There’s not as much crippling slowdown, but the action is still incredibly jerky, and it’s very difficult to play. Geese is still a hidden character, but he’s selectable via a cheat code that also enables Iori Yagami from The King of Fighters as a playable character (the only time he shows up in the series). That same cheat code also enables simplified commands for certain specials, which are executed by pushing Select and either of the two face buttons. Lastly, the commands for executing supers have been simplified. 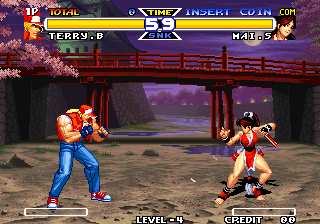 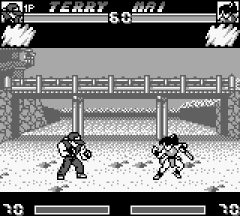