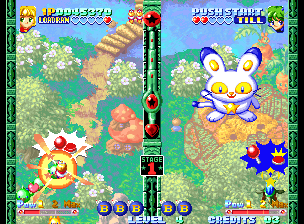 Every once in awhile, some brilliant designer decides to fuse two genres together to create an absolute work of stunningly goddamned genius. Twinkle Star Sprites combines the competitive puzzle nature of Puyo Puyo with the twitchiness of an overhead shooter to create one of the most unique and enjoyable games out there. 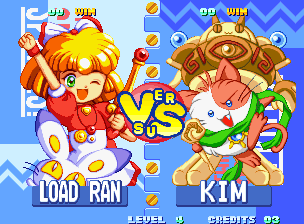 Twinkle Star Sprites is sensory overload: bright colors, cutesy character designs, and one ridiculously happy star. The story revolves around a little Red Riding Hood-esque girl named Load Ran (with her companion Rabicat) and her quest to find the Twinkle Star, which will grant any wish. Naturally, the game world is populated with a group of wacky characters who want the power of the star themselves. It may look overwhelming with cutesiness, but Twinkle Star Sprites is really one of the most intense nerve-wracking games you’ll ever play.

As you can see, the screen is divided into halves, with each player confined to their own field. You can’t directly fire at each other, but instead you attack indirectly by creating combos by shooting the enemies that come down your way. It sounds a bit much at first, especially when your instinct is to indiscriminately shoot everything in sight. And for the love of everything holy, ignore the ingame tutorial, because it’s more confusing than helpful. Here’s a run down on how to play:

Enemies come down the playing field in a set formation, much like any overhead shooter. You can tell how many hits it will take to kill them by their color – red is the weakest, purple is the strongest. When destroyed, the enemy will explode and damage all of the enemies around it. In this shot, all of the bad guys are red, so a single shot will cause all of them explode.

The enemies were close enough and weak enough to cause the whole wave to explode in an array of fireworks. This causes a combo. You can catch other formations of enemies in an explosion to form an even higher combo.

Creating combos causes balls of flame to be shot on the other side of the screen. This is the first stage of attacking the other player. Naturally, the higher combos you score, the more fireballs are shot over.

However, your opponent can attack the flame by shooting it a few times, sending it back to your side. Now, you’ll notice that it’s blue instead of orange. You don’t have to directly shoot the fire balls – you can catch them in explosions caused by other enemies, which create even more powerful attacks.

Destroying a blue flame will send a special attack over to your opponent. Special attacks are unique to each character, but are extraordinarily useful (in this case, it’s those rabbit things.) They can’t be destroyed, and usually have a strange movement pattern that makes it hard for your opponent to dodge. In essence, the point of the game to send over enough special attacks so your enemy can’t possibly dodge everything.

If you create really high combos (or charge your power meter enough), you’ll send over a boss creature to attack, creating even more chaos for your opponent to deal with.

So the point of the game is to send as many attacks to your opponent until they’re overwhelmed. You still have to be careful though – since the flames can be counter-attacked, attacking too aggressively can be do your detriment as well. Most matches burst out in complete anarchy, especially when you grab the “Fever” power-up, which causes massive amounts of flame balls from everything you kill. Your only real relief – other than your reflexes and the slowdown that mars the game – are bombs that will clear the screen and make you temporarily invincible. 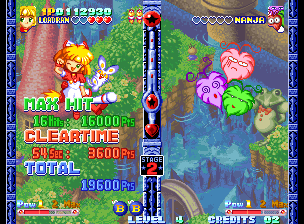 Like many puzzle games, playing by yourself is only vaguely amusing, because the computer seems uncannily good at dodging your attacks and has no qualms mercilessly firing whatever it can in your direction. The real magic comes in two player mode – there’s a certain joy in inundating your friends in a shower of fire and cutesy fluffy things until they cry in pain.

Naturally the gameplay is what really makes the game standout, but the look and feel of the game is part of its charm. While the basic gameplay graphics aren’t much impressive, everything else is bright and goofy, set to an impossibly upbeat soundtrack and populated by strange characters with even stranger motives. Some of the oddballs you’ll encounter include a rather effiminate knight named Arthur Schmitt who enjoys riding on his rocket, a group of colored fluffballs who call themselves “Nanja Monja” and really hate girls who wear red, and a midget cat named Kim (“Do Kesubei” in the Japanese version) who rides a giant robot, speaks in olde English, and is a terrible letch. Adding to the charm is the utterly atrocious (and typical of Neo Geo games) translation, which when not spelling words wrong, creates some of the most hilarious innuendos to come out of video gaming. 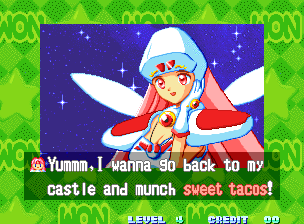 Everyone needs to play this game. There are emulators for the Neo Geo, of course, but if you’re into the real deal, you’ve got a few options. There’s the Neo Geo CD version with an arranged soundtrack like most games for the system, but otherwise is exactly the same.

The most complete port was for the Sega Saturn – ADK really went overboard in adding extra stuff to it. In additional to the rearranged music, there’s an anime intro (complete with sugary vocal theme song and a Sailor Moon-esque transformation), full voices for all of the cutscenes, extra dialogue for all of the other characters (since the Story mode only focuses on Ran), a handy rapid-fire button, the ability to carry over your power meter after dying, and extra little graphical tidbits here and there. There’s even an entirely new character, the purple-haired Chinese girl Meirin, who attacks with her goofy panda-face things and cosplays during her bomb attack. There’s the usual slowdown and brief loading times between stages, and the sound effects are pretty low quality, but otherwise it’s quite awesome. Really, the only thing lacking is an English mode. As a bonus, the Saturn version includes a fan disc, full of artwork (both fan-made and official), a karaoke, and “messages” from each of the characters. It’s only really for the hardcore Twinkle Star Sprites fan, so if you stick with other versions, you’re not missing a whole lot. Screenshots for these are below.

Twinkle Star Sprites was actually popular enough to get a Dreamcast release in 1999. Unfortunately, it’s missing almost all of the extras from the Saturn version, which wreaks of laziness. Still, you can choose between both original and arranged soundtracks, and you can turn off the slowdown entirely, if you wish. Moreover, there’s no load times and the multi-language support is present too, in case you enjoy the mangled English. Due to the cult popularity of the game, both the Saturn and Dreamcast versions can be a bit hard to find, although the Dreamcast one is, in general, slightly cheaper.

Unfortunately, due to its quirkiness, Twinkle Star Sprites never made that much of a splash in America, even though it did see an arcade release. If you’re even remotely into chaotic two player action games that really succeed in doing something different, or are just a fan of weird and cutesy Japanese games, you’ll find a real gem with this one.