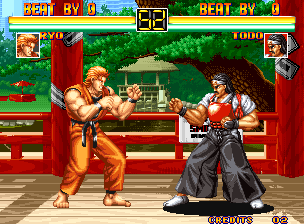 After Takuma leaves Mr. Big’s crime family, and Ryo refuses to join up with him, Mr. Big kidnaps Ryo’s sister Yuri. This being a video game, rather than doing something logical like calling the cops, Ryo and his friend Robert set out to kick the living crap out of Mr. Big. The entire game involves the duo fighting their way through local thugs to obtain information about his location. After defeating Mr. Big and Mr. Karate, the game infamously ends with a cliffhanger where Yuri is about to tell Ryo that Mr. Karate is their father.

Art of Fighting must have seemed pretty complex when it first hit the arcades. Instead of just kicking, punching, and comboing, you could dash in toward your opponent to punish their mistakes, back dash to get away from them quickly – and when your health bar got really low, you could perform a devastating super. These supers were referred to as “desperation moves”, coining a term that has since become standard fighter jargon for any super that can only be executed when your health is low. 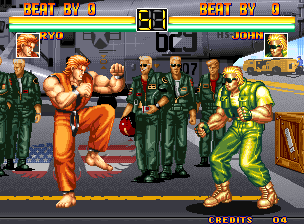 The controls are quite simplistic. A punches, B kicks, C throws, and D taunts. Pushing C while you are not in position to throw will execute a “strong” attack. Whether the strong attack is a kick or punch is determined by which of the two buttons you most recently used. Also, A & C executes an uppercut, and B & C executes a kick to the shins. Certain characters can perform a flying attack by jumping against the wall and pushing C. Strangely, a few characters lack the ability to throw.

Perhaps the strangest part of Art of Fighting‘s gameplay is the limited use of special moves. You have a meter below your health bar for your “ki”, and performing a special or desperation move will deplete a portion of it. The bar changes colors when it gets lower, from yellow to green to red, which determines how powerful the special move is. Specials and desperation moves cannot be performed without at least a small amount of ki, and while it will gradually replenish itself, you can speed up its recovery by holding down A or B. This system prevents people from constantly spamming the same special moves, while not being too limiting at the same time.

Something else that differentiates Art of Fightings from other fighters is the way taunting works. Performing a taunt will deplete a portion of your opponent’s ki meter, making it an important part of gameplay, since it limits your opponents special abilities. Additionally, you can diffuse a opponent’s fireball by kicking or punching the exact front portion of it. The timing to do so is absurdly precise, so don’t expect to do this consistently. This ability to diffuse fireballs is retained in each of the sequels.

Art of Fighting has pretty good music, as would be expected from any SNK game. Visually, it’s also fantastic, and SNK obviously put a great deal of effort into giving the game an identity. For instance, the characters fall in different directions after losing a round, depending on what move they are defeated with, and where they are hit. Their faces also get bruised a lot after taking hits. But where it really stands out graphically is in the background designs. Everything from the light reflecting on the freshly wet pavement in the alley in Mickey’s level, to the flickering light above the pool table and the bizarre graffiti stating “BRAIN” in Jack’s level, or the garden with its muddy pool in Ryuhaku’s stage – they all look amazing. Best of all are the endless neon lights in Lee’s background, and the city scape lit up at night in King’s level, which both create a fantastic visual effect.

The events of Art of Fighting are a bit difficult to take seriously, with the whole Star Wars-esque “I am your father!” deal being more goofy than anything else. Somehow, the game actually becomes that much more memorable for it. SNK’s designers must have shared this view because they often referenced these events elsewhere in SNK games. King of Fighters ’97 for example, directly parodies Art of Fighting in its ending.

The biggest complaint with Art of Fighting is that you can only control two characters in story mode – Ryo and Robert. The others are available exclusively in two player mode, and Mr. Big and Mr. Karate are only available after they have been reached in the story. Also, in story mode, Ryo and Robert each have a special that they do not have immediate access to, and it must be “learned” by completing a challenge between fights.

As would be expected with any moderately popular arcade fighter in 1992, Art of Fighting was ported to all of the home consoles. The Neo Geo CD version is exactly the same as the arcade, though with the same horrible load times that the console is infamous for. Takara was responsible for the SNES and Genesis ports. The SNES version plays pretty well, and contains a much appreciated Player 1 Vs. CPU mode, wherein Mr. Karate and Mr. Big are playable without a cheat. It also reveals that Mr. Karate is Yuri and Ryo’s father, rather than ending with a cliffhanger. The sprites have been shrunken down a bit, but the scaling has been kept in, even though it doesn’t zoom in quite as much as the arcade version. The Genesis version has the zooming removed and the colors reduced, but otherwise plays reasonably well. The PC Engine CD version – ported by Hudson – requires an Arcade card and looks the most accurate to the arcade version. Since the PC Engine hardware doesn’t support scaling, there’s some strange graphical trickery used to emulate the same effect. It’s like they slightly resize the sprites, which isn’t exactly smooth, and it distorts the proportions of the characters. But it’s still mighty impressive considering the weak hardware. There’s also redbook audio music (the same as the Neo Geo CD version), along with voices for the intro and ending, and cute super deformed character sprites on some of the loading screens. In 2006, the game was ported to PlayStation 2 as part of Art of Fighting Anthology, which compiles the entire trilogy together. 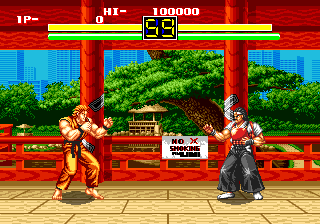 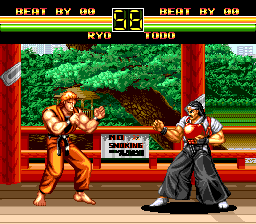 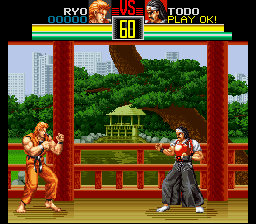