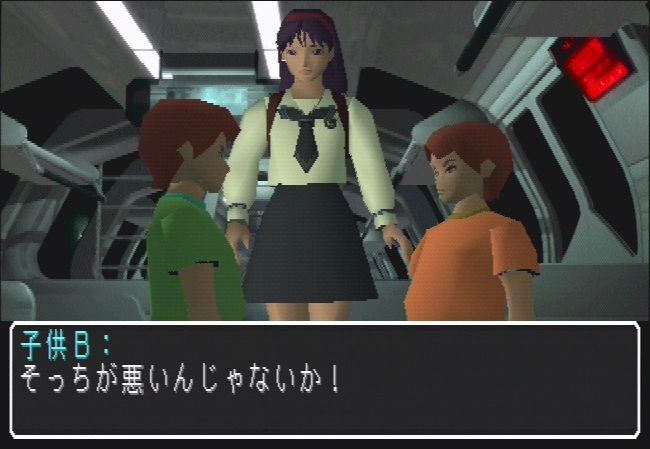 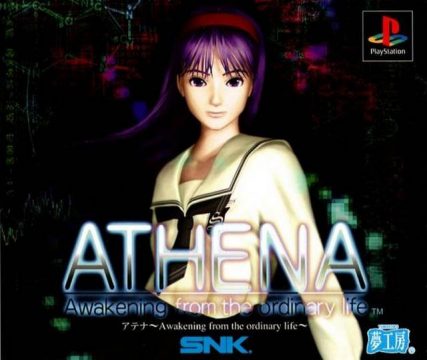 Athena has never been SNK’s most consistently portrayed character – she was a warrior goddess at first, then a pop idol with psychic powers, which became the version used in the The King of Fighters games. Owing to the popularity of horror-adventure games like Resident Evil, the publisher decided to revamp the character yet again for Athena: Awakening from an Ordinary Life, a three-disc adventure game for the PlayStation, developed by Yumekobo (who also did The King of Fighters Kyo.) This game recasts her in a dark alternate reality where she’s just a regular schoolgirl, slowly struggling to deal with strange powers that are emerging within her. The plot takes place in 2018, a futuristic version of Japan where they’ve cloned dinosaurs and set up an underwater theme park. These advancements are made possible through a computer called Tauntauls, but obviously there’s a conspiracy behind all of this. Only Athena, who finds herself teleported to their base, can undercover the truth. 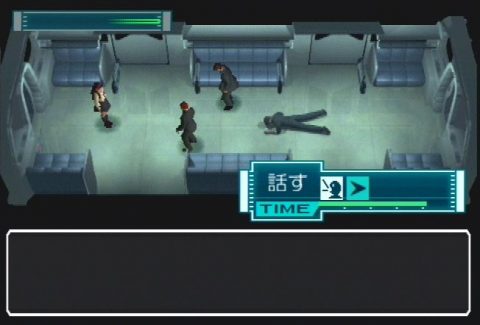 While it controls like Resident Evil, being a third person adventure game with polygonal characters, pre-rendered backgrounds, and tank controls, the focus is more on puzzle solving and less on action. Although the term “puzzle solving” is used very loosely here, because it’s mostly comprised of running back and forth and back and forth, talking to people and finding items and so forth. There are some small logic puzzles, but they’re sparse, and pretty dull. Throughout the game, you can use the power of telepathy to read people’s mind, use teleportation to escape from tricky situations, use clairvoyance to find hidden stuff and use repair skills to fix things. Whenever you’re next to something important, a little screen pops up with the appropriate psychic power. To activate it, you need to play a tiny little rhythm beat. Hilariously enough, if you screw up, you lose a bit of ESP, and if you run out, you lose consciousness, so it’s entirely possible to end the game by trying to use your powers. There’s not much in the way of action, as combat is completely turn-based. These are all pretty boring and lack in strategy, since all you do is fight and heal. Technically you don’t have a life meter, just your ESP gauge  – Athena automatically uses her powers to defend from enemy attacks, so effectively it doubles as HP and MP.

Awakening from an Ordinary Life is definitely focused far more on atmosphere than gameplay, which would have been acceptable if the story was interesting, but it’s really rather thin. The dark atmosphere is a stark contrast to her cutesy J-Pop personality in the King of Fighters games, and the approach comes off similar to the Persona games. There aren’t too many ties to the other games, except for the appearance of Kensou, who seems to have a crush on Athena, acts like a goofball, and gives her meatbuns as presents. The game introduces a few other characters, like Rika Kashiwazaki, her friend at school, and Masato Kurihara, a boy with mysterious powers who helps Athena understand the truth behind Tantauls. She also has recurring encounters with a psychic jester named Astraios. The ending theme is “wannabe / Misty Eyes”, sung by pop artist Rumi. 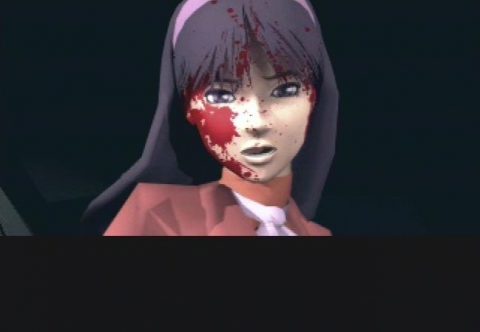 The first disc only lasts for about fifteen minutes of real gameplay. It’s all taken up by CG animation, which was the big selling point of the game. Unfortunately, the quality is only so-so – it’s not even at Koudelka‘s level, and certainly doesn’t touch anything by Square. Some of the game over scenes are kind of cool, at least. The videos (and most of the game) only take up the top two-thirds of the screen, leaving the bottom for text windows or just plain blank space. The opening video is pretty hilarious at least, since it features some really bad English voice acting (upon finding the relic underground, one scientist exclaims “Is it…human?” and another, male scientist yammers, “Yes, it is! But whether it’s male or female, I couldn’t tell you without…uh.. further…investigation…” ) The rest of the game is completely in Japanese, and really quite boring. It’s also quite short and is beatable within a handful hours. And in spite of that, those few hours are just horribly tedious, filled with mostly running around and boring combat. As such, the basic concept (“psychic schoolgirl battles dinosaurs!”) ends up as a waste, and it’s such a huge departure from Athena’s typical persona that it comes off as weird and edgy.

There was also a novelization and a 13 episode live-action drama starring Kei Ishibashi (who had at that point had been known for a few Ultraman movies), which probably suits the storytelling a bit better.