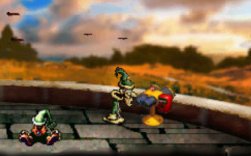 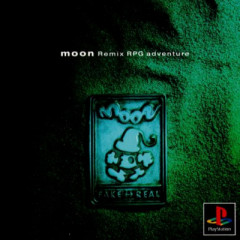 There is an immense dichotomy between the small size of Japan and the great expansive economy which they attained in the period after the Second World War. State of the art electronic components, sold for a very competitive price, along with notable advertising and the desire to expand their market made this little Pacific island the world power it is today. Instead of the old emperor’s desire to imperialize and conquer territory, the last decades have been ruled by private businessmen and enterprises that were able to understand the present day’s market tendencies in mutual adaptation. Video games have become one of Japan’s most desired commodities, one they export by the hundreds every year, in the form of home and portable consoles, games, along with a fully developed secondary industry of toys and collectibles. A considerable portion of western video game players regard Tokyo as their Mecca, and Akihabara as their Grand Mosque, the place where every game they dream of can be tracked, in spite of its age or rarity.

Surprisingly, with business being synonymous to the Japanese videogame world, it is the creativity and innovative spirit of a few authors which has driven the industry forth, to a point where economics are totally irrelevant in the artist’s domain. Such an example is that of Love-de-Lic, a small independent studio founded solely by Kenichi Nishi, of Squaresoft fame, in the year of 1995. This unusual and somewhat enigmatic company name derives from the founder’s admiration for the electropop moods of Yellow Magic Orchestra, explicitly for their album Technodelic, Nishi’s favourite. After having participated in the creation of some of the most respected titles for the Super Nintendo, namely Chrono Trigger and Super Mario RPG as a field designer, he felt the desire to find new paths that could lead him to fully realize his creative power. For this reason he invited many of his best friends and most promising co-workers from the Squaresoft group, creators such as Taro Kudo, Akira Ueda and Yoshiro Kimura. Together, a group of nine elements worked for over two years in a highly personal project: Moon: Remix RPG Adventure was released in 1997 for the PlayStation.

With Moon, a whole new approach to the Japanese RPG genre was postulated: the taste for new and different ideas ensued in the following company titles, PlayStation’s UFO: A Day in the Life in 1999 and Dreamcast’s Lack of Love in 2000, again published by the supportive ASCII Corp. This talented group remained active for the period of five years, period after which most of its designers disbanded, determined to found smaller studios of their own. Such is the case of very active studios like Skip, Ltd., creators of the famed Bit Generation series, as well as GiFTPiA and Chibi-Robo, which were spearheaded by Kenichi Nishi himself in the subdivision number 24 (Ni meaning 2 and Shi meaning 4). Others, like Punchline, went on creating games such as the dreaded Rule of Rose and Chulip; or, in the case of Vanpool, preserving the choice for odd themes such as the ones seen in Endnesia or Freshly Picked Tingle’s Rosy Rupeeland. Some of these creators are also known to have done contracted works for other companies such as Cing, Marvelous Entertainment and Grasshopper (namely Akira Ueda, involved in the design of Contact and the Shining Soul episodes).

After just five years of activity, the studio was shut down having only released three Japanese exclusive titles that, in general, sold very poorly in their time. But the congregation of these visionaries has resulted in the establishment of a long lasting method of video game design, characterized by the conveyance of feelings and emotions (love) through the cold and impersonal hardware (processing unit). Love-de-Lic’s story is best told by means of its atypical video games. 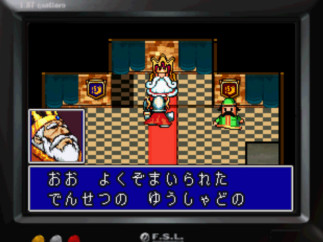 n the year of its release, Moon was, like so many other titles, overshadowed by the launch of Squaresoft’s epic Final Fantasy VII, the game which signaled the beginning of a turning point for the PlayStation console. Dissimilar to the average RPG, Moon renounces battle sections and leveling up systems focusing, instead, on the intricate bonds we establish in our life and the rewarding love that results from them. The game’s unsettling cover art presents the simple outline of a mysterious character and, below, the words “Fake <-> Real” it seems as though the game was preordained, from the very beginning, to become the whimsical relic it is today.

The first game screens are bound to leave the player intrigued, as they show the vague scene of a young boy sitting in front of the television set, during a peculiarly starry night, playing an RPG game named ‘Moon’. This idyllic setting turns into something even more extraordinary, as this fictional television set in the darkened room becomes our own. And thus commences the first act, where the player is invited to explore an abbreviated version of a game straight out of the previous generation, with a set of independent graphics, sounds and controls that seem to have originated from a 16-Bit console. The first layer of fictional content, an empty room with nothing but the console plugged into the television and an open window, is coated with yet another stratum of fiction, a sarcastic ersatz of the common Japanese adventure RPG. 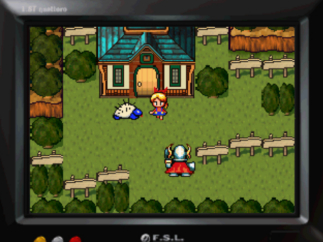 A sluggish knight named Siegfried, drawn in a style similar to the prominent Amano art, is summoned to the presence of the ruling King who bids him to defeat a fierce and troubling dragon that ate the moon from the sky. This prologue-like segment, played on the faux TV, reveals a considerable amount of influences from Enix’s Dragon Quest series, comprehending similar exploration of the field, battles and dialogues. However, the player is only invited to play certain sections of the fast forwarding “game-within-a-game”, from the beginning of the quest until the final confrontation, abruptly terminated as the boy is order back to bed by the voice of the irate mother.

At this point, another strange phenomenon happens that transports this child to the virtual world of the game he just played, only this time different rules apply: the surroundings have become more realistic and volumetric, each of the villagers is unique instead of generic, and our character, the taciturn boy, is invisible and inaudible to all others. All save one old blind woman, isolated in a house in the middle of the woods, who mistakes him for her long-lost grandson and helps him to become visible by dressing his hollow body. The protagonist of the fake Moon game, Siegfried, has now become a non-controllable character which is seen wandering around, co-existing with the boy and the remaining characters. In the later dialogues, ironically, he is mentioned not as the hero the first round of the game portrays him to be: the real world version of events displays a less heroic character who is obsessed with hacking up animals and gaining levels. Our mission, by the other hand, is to survive by learning about people’s needs and to help them sort out their problems, ultimately earning their love. 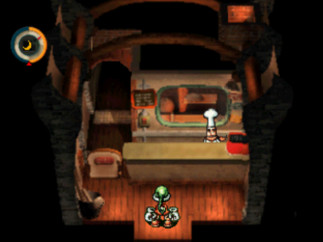 While this is technically a “Role Playing Game”, the intention to make it something fairly different from the ongoing notions of how this genre should work is downright noticeable. Instead of subjecting the player to everlasting battles with fanciful creatures, the player finds dead monsters scattered around the world, which he must reunite with their souls in order to the gain the much sought after love points. Because the character’s subsistence – and, in fact, his very entrance – in the stage of Moon is highly volatile, he cannot remain awake for too long, thus becoming very tired and eventually disappearing. To avoid this “game over” situation, the character must not stray too far from the adoptive grandmother’s dwelling, where he can rest and earn a daily allowance. In order to avoid returning constantly to the house, there are two ways to remain lucid: one is to complete missions and raise the love level so that our action meter can be extended; or to purchase food which the hollow character can consume in order to extend his existence for a certain period of time.

While the process of making acquaintances with the residents of this world is liable to be considered an optional sub-quest, it stands as the greatest achievement of the game, the part where it really differs from the majority, if not the entirety of titles available. This is where the player feels part of a community which transpires life, almost a routine that understands daily and nightly activities. The inventiveness of all the characters seen in this game, each of them perfectly unique, is a feature which attests to the immeasurable prowess of their designer, Kazuyuki Kurashima, who intended to disperse from the traditional JRPG practice. One particular character is the head that communicates with our character in his dreams, dressed with an exotic, middle-eastern type turban and accessories: a mystic figure who seems to be the only one who acknowledges the reason why the character came to inhabit this world, guiding him according to ancient prophecies. They all share a hand-drawn aspect, with very careful color tones and animations, and although the game isn’t fully voiced, each character produces a unique kind of gibberish, which was attained by the fragmentation of recorded sentences spoken in different languages. This particular effect, impossible to describe in words, sounded perfectly unique in its day and has, so far, been used in a considerable number of subsequent games.

Music accompaniment also plays a key-role within Moon, as the game can be quite silent should the player not find the hidden magic discs. These can be played in any sequence in the MD (Moon Disc) player, a menu option which resembles a music playing software. Each disk includes one track from the vast soundtrack, combining an eclectic selection of music that branches between several styles, modern and classic. For those who are familiar with GiFTPiA for the Game Cube and Chulip for the PlayStation 2, it should come as a surprise that the free choice of the background melodies originated in this ground-breaking title. This combination of assorted tunes was re-released, in 2002, as a CD-set under the name of The Sketches of Moondays, a three disc edition with a carefully planned selection. 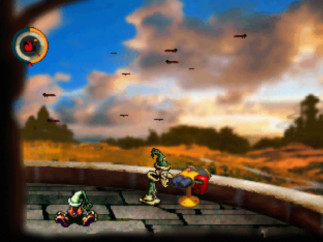 What makes Moon a title worthy of being remembered for the remaining ages lies in the very exquisite gameplay balance that is able to seduce the player in spite of its seemingly simple nature. Understanding routines is one of the key elements to succeed in this virtual realm where nothing is stationary. Secondly, there is a great amount of symbolism to this narrative, to its stereotypical characters and what each of them stands for. Most importantly, this game is an endless dispute between the creator’s reverence for the Dragon Quest series (note that Dragon Quest IIIis Nishi’s favorite game) and the desire to overthrow and surpass it. To base the gameplay on such distinct elements, while preserving the RPG feel is, ultimately, Moon‘s greatest achievement and one not meant to be overlooked. Indeed, due to its subversive nature, the game has been cited by Toby Fox as an inspiration for Undertale, among other classic JRPGs like Earthbound.