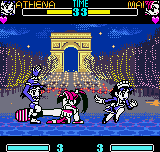 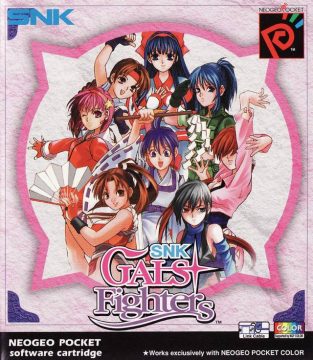 If you’re a fan of the Neo Geo Pocket Color, SNK’s ill fated portable console, you are probably aware that its fighters are some of the best games on the system. These included Last Blade, Fatal Fury, two Samurai Shodowns, two King of Fighters, and SNK Vs Capcom: Match of the Millennium, arguably the best on the system. But one of the few “original” titles was SNK Gals Fighters, which is often overlooked.

SNK Gals Fighters (officially written “SNK Gal’s Fighters” in Japan despite being grammatically incorrect, and sometimes in English language resources as “SNK Gals’ Fighters“), as opposed to most of the other fighters for the console, was developed at least in part with involvement from Yumekobo, who also aided with Fatal Fury: First Contact. Despite this, it plays exactly like what would be expected from SNK during their prime. 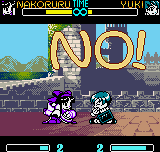 SNK’s female fighters are quite popular for a multitude of reasons, so it makes sense (or, at least it did to SNK) to make a fighter dedicated to these femme fatales. The result of this bit of fan service is a superb crossover fighter with a rare appearance of Shiki (from the 3D Samurai Shodown games) and the only playable appearance of Kyo’s girlfriend, Yuki, as a secret character.

A rather simple plot has been devised to bring everyone together. The mysterious “Miss X” is holding the Queen of Fighters tournament and has invited these ladies to attend, with the “K Talisman” going to the winner. The K Talisman will grant one wish for its owner and all the contestants are eager to obtain it, with generally simple ideas in mind for their wishes. Each character has a ending of their own where their wish is potentially realized, often with goofy results. Many SNK fighting games have a unique sense of humor, but this one is even sillier than most.

The VERY popular Mai fights with fans and fire-based attacks. She is just as half naked here as any of her other appearances, but, keeping with the tone and humor of the game, she is portrayed more as cute and her “fan service animations” (you know what I mean) have been toned down. She has been given a move where she parachutes down to the ground butt first and her Deadly Ninja Bees move has been altered. Originating from the Fatal Fury series, she is in love with Andy Bogard from the same games. Her wish is for her and Andy to be married.

Yuri is SNK’s “Capcom style” character, making her the best choice if you are only familiar with Ryu and Ken from Street Fighter. Her brother is Ryo Sakazaki from the Art of Fighting series, where they both originate. She has a move where she calls her father, one of my favorite video game characters ever, Mr. Karate, to attack her opponent with a giant fireball. Other differences are attacking with a croquet mallet during her Raiohken Hammer move. Her wish is essentially to kick ass and show up her brother, Ryo. Oh, and to open her own dojo, or something.

Athena originates from the old SNK game of the same name. She is technically a Greek goddess, and in SNK games, is more interested in being a J-Pop idol (?!) than doing goddess things. Athena is a huge cosplayer in this game, with most of her moves involving a change of outfits, even dressing as “original” Athena at certain points. She has a special where she attacks with a autographed picture of herself as a projectile and another move where she summons Kensou to absorb her opponent’s attacks! Her wish is for her hair to be long.

Leona’s father is Heidern from King of Fighters, where she first appeared. Like several other characters, she is cursed with the blood of the Orochi, which is displayed during certain moves. Her cold demeanor has been left intact, but her explosives have been chibified and are MASSIVE. Other differences are a move where she blows up her opponent with dynamite, bites her opponents face Blanka-style, a super where she dons a suit while a jet machine guns her opponent, and the removal of her boomerang hairband move. Her wish is to ease her “torment”.

Nakoruru is from Samurai Shodown. In Gals Fighters, she has access to both her hawk, Mamahaha, and her wolf, Shikurou. She can even call her sister, Rimururu, to attack her opponent! Her only other differences from her other appearances are two moves, Nakoruru Upper and Nakoruru’s Rush, where she rushes at her opponent and kicks the living shit out of them. Her “secret” animation is a reference to Samurai Shodown 2 (she turns into a stuffed doll) and is the cutest freaking thing ever. Her wish is to get back home.

Shermie is from France, has telephone conversations during her intro, and has the worst haircut ever. Having originated in King of Fighters, she is among it’s several characters who have the blood of the Orochi. She has two original moves here, Shermie Double Strike and Shermie Hyper Shoot, and Axle Spin Kick goes higher. Her wish is for a home for her pet hamster.

Shiki comes from the 3D Samurai Shodowns. She is the only character portrayed with a serious tone. Despite this, she also has a attack with a croquet mallet. Shiki has also been given a original move where she appears from a trap door in the ground. Her wish is to see her child.

Akari Ichijo hails from Last Blade. She is basically a Magic Girl character and has many magic based attacks. The most interesting move is a Shang Tsung-style special that can change her into her opponent, giving her access to their moveset, excluding supers and Pretty Burst attacks. The demon that spits her out in certain specials has been changed to Chang Kohan from King of Fighters! She has a super where, among other SNK characters, Juzoh from Last Blade that attacks with a club appears. She can not make up her mind about her wish.

Whip was introduced in the King of Fighters series. Perhaps SNK’s designers were playing Yie Ar Kung-Fu, where most of the characters are named after their weapons, when they created her, because she attacks with a whip. Her Desert Eagle Shot move can be spammed like crazy and can even hit downed opponents. Little is known about her past. Her wish is to remove the curse on her.

Yuki was originally a non playable character from King of Fighters that appeared in cutscenes and artwork. She is Kyo’s girlfriend and looks like your typical Japanese schoolgirl, not that far off from Sakura of Street Fighter Alpha 2. Her wish is to get revenge on her boyfriend’s rival, Iori Yagami.

Miss X is, rather obviously, Iori Yagami in a sailor dress and a ninja mask. He fails to fool any character with his disguise and they all point this fact out immediately. Maiden Masher will make him attack his opponent with a knife and fork, and Miss X’s Super will make him crash into his opponent with a moped. There are several SNK characters that appear in his pre fight scene in story mode. He has no wish. 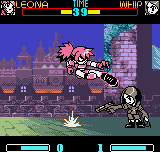 The fighting system will be immediately familiar to fans of King of Fighters. The combo system feels pretty much the same, especially if you’ve played other NGPC fighters – since there are only two buttons, you tap it for a weak attack, and press it harder for a strong attack. The evasions that KoF are known for are here as well, and are performed by tapping A and B at the same time. Supers and specials are pretty much executed the same way as you’d expect.

There are a few differences to make this more than merely a KoF style cross over game. Each character has a “Pretty Burst” attack, which can be performed at any time, at the cost of one level of your super meter, by tapping Down, Down, and A and B. These will do things like replenish health or drain a portion of the enemies health or whatever – each character’s Pretty Burst attack has different results. Certain moves have been changed from the character’s other appearances and other moves have been eliminated altogether. Each character has a “secret animation” that can be view at any time during a fight by holding Back and tapping the Option button. A few of them are pretty humorous and/or cute. Every character except Shermie, Yuki, Shiki, and Whip have air throws. You also gain items after certain battles, which are then saved to the game’s memory. Next time you play, you can equip one of them, which has various effects ranging from depleting your opponents starting life meter to extending your own super gauge. Finally, this game is FAST. It can be set to a absolutely absurd speed in the option mode.

Being a SNK game, the presentation is, simply put, perfect. None of the music has been reused from other games, and it’s light hearted, and generally enjoyable. The character sprites and background designs are gorgeous, in a 8-bit-ish kind of way. Many sprites have been lifted from other games on the NGPC, although there are still plenty of unique animations. The only really “new” characters are Yuki and Whip, the latter of which never appeared in any other portable game. Other cute touches abound too – wins are even denoted with a heart, rather than a dot or a “W” like most fighters. When you finish a character with a supermove, it flashes bits of artwork of the defeated foe, some of which are reused in the endings.

Most importantly, this is simply a great game – arguably one of the best on the system. It’s too bad they never made a console or arcade version, or at least some other light-hearted or parody-style game. If you like KoF and SNK fighters in general, this is yet another reason to own Neo Geo Pocket Color.