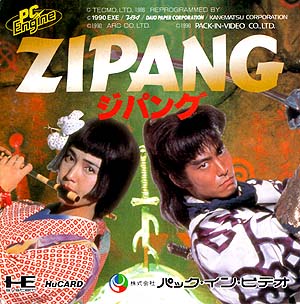 For some unfathomable reason, the 1990 Japanese fantasy samurai film Jipangu/Zipang spawned not one, but two very loosely related tie-in video games. The first one is the famously bizarre NES platformer Jigoku Gokuraku Maru AKA Kabuki Quantum Fighter, where the protagonist Jigoku becomes an US soldier who turns into a kabuki performer in a creepy virtual world. Then there’s Zipang for PC Engine, which is… Solomon’s Key in all but name.

The game was reprogrammed and published by Pack-In-Video, and developed by Arc System Works, but it is the exact same game as Tecmo’s (with different graphics of course), that substitutes Dana and his wand with Jigoku and his magic sword, which is still used to create and destroy blocks and not cut anyone to pieces. Jigoku has to reach the golden temple from his film instead of Solomon’s book, in order to get the “good ending” you have to find pieces of Japan’s map instead of book pages, and the Western Zodiac signs are switched to Chinese ones, but nothing else has been changed. There’s a welcome difference, though: finally a password system was added.

Zipang for some reason is rarely listed among the sequels and remakes of Solomon’s Key, maybe because of the parent film’s obscurity. 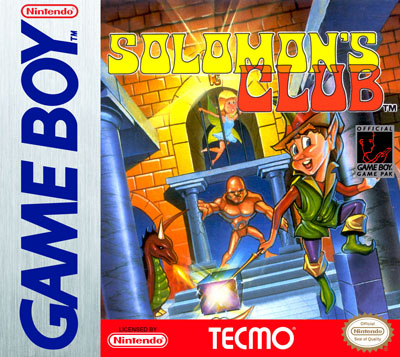 Solomon’s Club is not a real sequel of Solomon’s Key, neither a remake, but rather a sort of “downscaling” of that title, adapted to fit the limitations of the Game Boy. It was developed by Graphic Research Co. instead of Tecmo, that just published it. The story and gameplay are the same, and don’t be swayed by the cover that makes Dana look like a Link clone, complete with elven ears! 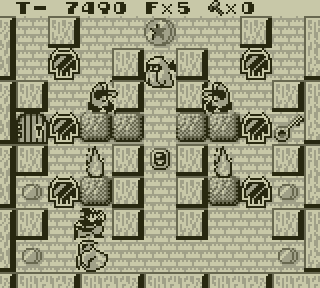 This time scoring items double as money, since this version introduced an item shop that appears every now and then in the stages. Some of the items sold, like the shoes to go faster or the hat that lets Dana break blocks in a single headbutt, are kind of useless, while others are extremely valuable, such as the hourglass to recover time, the fire extinguisher to put out flames, or the hammer that lets you finally smash those damn enemy-generating mirrors. And these items also are kept between levels until you lose a life! As you can see the devs tried to make the game less frustrating, also shown by the fact that there is a screen that lets you choose the levels and rooms therein (an idea that will be adopted by Solomon’s Key 2 one year later), plus there are passwords and you can continue as much as you want. There’s also the opportunity to choose between two different control schemes, where jumping is linked to either the A button, or the Up direction like in the original game.

In general, the puzzles are less harsh as well and several levels, especially early ones, are re-creations of stages seen in the original but a bit easier. It’s also shorter since it has no set of unlockable levels. 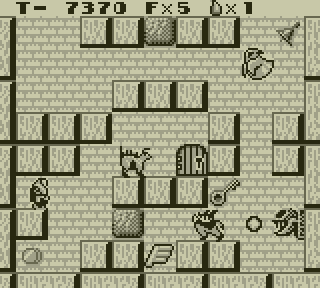 In the end Solomon’s Club aims to be a downsized version of the NES cartridge but also a nice little puzzle game that can stand on its own, and certainly succeeds in doing that. 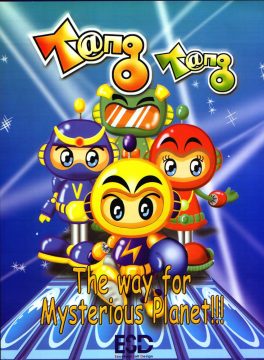 An obscure Korean arcade game with a sci-fi theme, developed by the unknown GameVision, was turned into a slightly less obscure GBA cartridge in 2001, published by Take Two Interactive. A double rip-off, since the mechanics are lifted from Solomon’s Key, but the main characters have been obviously modeled on Bomberman and his friends. The localization explains the “Tang” of the title as being both an acronym for “The Associated Nexus of Galaxies” and short for “Tangibles”, the nickname for the heroes, given because of their ability to make blocks appear out of nowhere. Fireballs have been replaced by the Tangs’ limited sci-fi gun bullets and there are five bosses based on the four natural elements, plus a plant-based one, that need to be shot, but that’s about the extent of the differences the game has with its Tecmo inspirator. 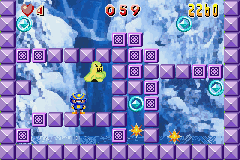 Reviews of the time were mostly very negative, citing the dated and ugly graphics, frustrating and lifeless gameplay, the 120 levels being actually 30 but repeated with four different colors and enemy placements (depending on who you choose from the four available avatars), no level editor and a bug (or possibly a strange feature) that prevented to save your progress and only saved the best high scores on the memory instead.

Video Game Den – http://www.videogameden.com/fc.htm?sok Comprehensive article that lists some of the game mechanics and differences between the arcade and the Famicom port.

http://www.videogameden.com/hucard.htm?zip Site has info and pictures on Zipang too.

StrategyWiki – https://strategywiki.org/wiki/Solomon%27s_Key Wiki on the game’s mechanics and strategies.