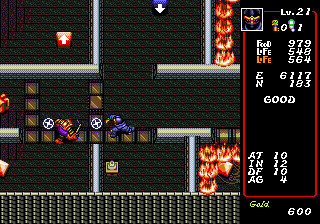 Despite its name, Dungeon Explorer is not merely a port of any of the TurboGrafx-16 games. Instead, it’s a whole new game with a completely different take on the idea. It was developed by Westone, the same company behind Sega’s Wonder Boy games, and, like Hudson’s Sega CD release of Lords of Thunder, was only released in North America and Europe. 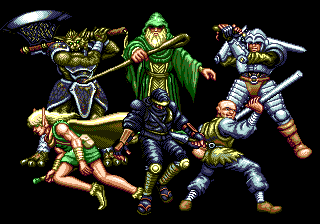 There are only six classes in this version: Knight, Ninja, Beast, Elf, Monk and Wizard. Multiplayer is also limited to four players. After choosing your character, you’re sent to a small screen called Freedom Hill, which essentially acts for the hub for each of the six main dungeons. You can theoretically tackle them in an order, though it doesn’t quite work that way in practice. Each dungeon has different themes, including Desert, Samurai, Ice, Medieval, Ocean and Mountain. (Make sure to take on the Sand dungeon in the lower left corner first, or you’ll be completely destroyed.) You can also technically take on the final dungeon at any point in the game, but chances are you won’t even be powerful enough to take on the guard before you travel through all of the other dungeons. Unlike the TG16 games, you get experience points through killing enemies, which in turn raises your maximum HP. The only way to improve your stats are either through finding accessories in the dungeons, which wear off as soon as you leave, or by purchasing more powerful equipment in town.

The graphics are completely different from the TG16 games, and feature larger characters and more detailed tiles, although they’re limited by the color palette of the Genesis. The screen is laid out more similar to Gauntlet, with the status bar taking up the right-side portion of the screen. The music is also completely different, and while there are some decent tunes, they don’t remotely stack up to Dungeon Explorer II. There are, however, some slightly amusing (and extremely muffled) voice samples whenever you die or obtain a power-up. One of them sounds like your guy is yelling “CHRIST!” whenever he perishes. 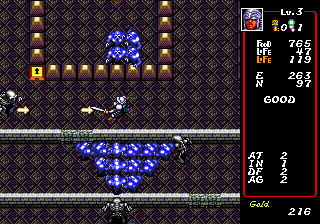 While the TurboGrafx Dungeon Explorer games borrowed bits and pieces from Gauntlet, the Sega CD version steals from it much more liberally. The dungeons look almost exactly identical, right down to the narrow corridors separated by thin walls. They’re also fairly huge, with lots of exploration and backtracking required. The monster generators are much more productive, spewing out a new monster once per second, meaning you can easily be dealing with at least a dozen or more enemies at once, all scrambling straight towards your heroes. Although you have a separate “HP” meter like the TG16 games, there’s also a Food indicator, which starts at 1000 and slowly counts down, similar to the life gauge from Gauntlet. Thankfully, you can find both healing potions and food potions throughout the dungeons, to help keep yourself alive. Some items can be stocked up, although others are used immediately. The dual magic spell potions from the TG16 games are gone, and now there’s only a single power potion, which temporarily powers up your character’s weapons.

The developers of the TG16 games realizes that the Gauntlet experience doesn’t quite work outside of the arcades, since (A) the excessive amount of enemies means that they were meant to be quarter munchers, and (B) console games aren’t always played in a social atmosphere. The Sega CD version doesn’t quite understand this, and the game can be brutally unforgiving, especially if you’re only playing with a single player. Dungeons can take awhile to complete, and since you only have a single life, it can be a pain to restart an entire dungeon just because you made a single dumb move. At least the passwords have been dumped in favor of a save system. Anyway, it’s cool that the Sega CD version a different take on the mainline series, and while it’s actually pretty great in multiplayer, it’s too poorly balanced to enjoy in single player mode.