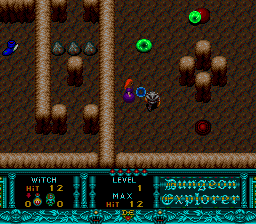 Hudson’s Dungeon Explorer remains one of the hallmarks of the TurboGrafx-16 library. Compared to other action RPGs like The Legend of Zelda, Ys, or Hudson’s own Neutopia, Dungeon Explorer is fairly short and straightforward. It actually borrows liberally from Atari’s classic arcade game Gauntlet, concentrating more on multiplayer action than exploration or puzzle solving. Multiplayer RPGs were rare in the 16-bit days – there were the SNES Seiken Densetsu (Secret of Mana) games for the Super Famicom, but that was about it – making Dungeon Explorer particularly unique.

In addition to two TurboGrafx-16 entries, there’s a Super Famicom pseudo-sequel and a Sega CD title that’s completely different from the rest. Hudson also resurrected the IP in 2008 for the Nintendo DS and Sony PSP, although they’re pretty far removed from their 16-bit brethren.

Before you begin your quest to save the kingdom of Oddesia, you need to choose your player. There are several character classes – Fighter, Thief, Warlock, Witch, Bard, Bishop, Elf and Knome – all of whom have projectile attacks. You can bring up to five players at once into combat, although if you’re playing on a real TurboGrafx-16, you need a Turbotap, since the base system only has one controller port. This is obviously much less of a problem on the Wii Virtual Console version. The dungeons are also filled with monster generators, with create new enemies every few seconds and must be destroyed as quickly as possible. The items can also be destroyed if you shoot at them. 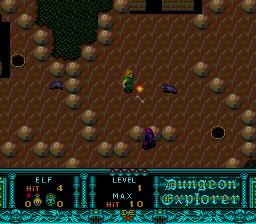 That’s about where the Gauntlet comparisons end, because from there, it feels more like a typical Japanese action-RPG. Instead of simply crawling through one huge dungeon, there are several smaller dungeons throughout the game, usually taking the form of caves, castles or underground tunnels. You’ll usually need to visit towns or explore the fields on the surface before finding the entrance to the next dungeon. Each of them also has a boss fight at the end. In addition to your standard projectile attacks, there are two kinds of magic spells, each governed by white and dark potions. The types of attacks are determined by your character class. The dungeons are usually fairly straightforward, only slightly taxing the brain with some simple rock pushing “puzzles”. However, there are plenty of areas where invisible winds will push the player in a certain direction, making movement difficult.

Your character has statistics in four attributes, depending on your character class – Agility, Attack, Intelligence, and Potion. The only way to gain levels is by killing bosses, so there’s no need to grind experience points, although defeated enemies usually yield worthwhile items. Whenever you defeat one of these bosses, your maximum HP will increase. They’ll also leave behind a jewel, which cycles through one of four colors. Each color corresponds to one of your stats, allowing you to pick which one you want to increase. This way, you can compensate for the shortcomings of your given class. By the end of the game, you’ll face off against Natas, a not-so-subtle renaming of Satan.

Each player is given several lives. If you run out of lives, you’re given a password that keeps track of your progress. You’ll need to input it in order to continue your game, which is pretty aggravating, but at least you don’t need to restart the game. You’ll also come across a couple additional characters throughout your journey, who will give you special passwords that let you play as them. 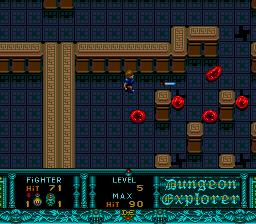 The graphics are dark, murky, and not terribly attractive, while the animation is a bit on the awkward side. The chiptune music is scratchy, like most HuCard titles, but there are still some catchy songs, particularly the foreboding (if short) main dungeon theme. So while it may not look like much, and it’s a bit dry in single player mode, the multiplayer still makes the original Dungeon Explorer one of the must have HuCards for the system.

Links:
Sega-16 – Dungeon Explorer Review of the Sega CD game.
Sega-16 – Side by Side A comparison of the TG-16 and Sega CD games.