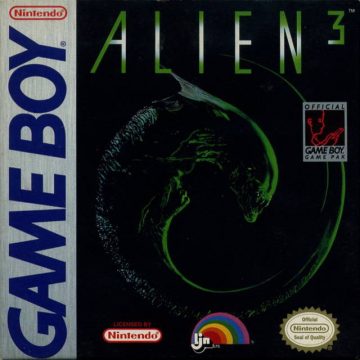 While still published by LJN, the Game Boy version of Alien 3 is brought to us courtesy of Bits Studios and is again a totally different game from what LJN released on the SNES. Fortunately, we again have an Alien 3 game that goes in a different direction resulting in a fun little title, representing a massive improvement in quality for Bits Studios after their disastrous Terminator 2: Judgment Day Game Boy game from a year prior.

The short script is actually very effective, not only being efficient but actually managing to capture the voice of the game’s characters. That it can accomplish this without also utilizing the film’s high quantity of profanity is impressive. It also creates a pretty impressive opening for the game. For a while Ripley is completely unarmed and just learning how to get around before things really get bad. This is an important quality, one similar to how Justin Fisher’s unofficial Aliens total conversion of DOOM also contains a first level with zero enemies, just some squad dialog (samples directly from Aliens and atmosphere. This is commonplace in big budget games today, to have a sparsely populated first area that attempts to work organically as a tutorial for how the game will play, but was unheard of in action games in the early 90s. Both examples are games based on the Alien franchise, and it’s notable how influential that film series has been on game design not just in obvious visual ways, but in how games are built and paced – In both Alien and Aliens a creature isn’t seen at all until almost forty minutes into each film and we can see that reflected first in games officially based on the series itself before it became standard operating procedure for action game design.

What does make this game a bit annoying, however, is its inventory. Players will find a lot of stuff to pick up along the way, but like some of the most ancient RPGs these items are all represented in the game world by a black dot. Prepare for a lot of pausing as checking the inventory screen is the only way to see a list of what items lay at Ripley’s feet. While hardware limitations make it unrealistic to expect a unique extra small icon for every item in the game in addition to how they’re depicted on the inventory screen, it would have been nice if they made just one or two so that one could tell right away if they’re passing by ammunition for one of their weapons or medical supplies (it’s generally wise the leave the latter where they are until they’re needed). In a game where one will already be going to that inventory menu to switch items and keycards regularly the extra step of having to check every single item one walks over can get annoying.

Most of the game consists of accomplishing missions given to you by Dillon (the murderer-turned-holy man played by Charles S. Dutton in the film) that consist of varying degrees of destroying a bunch of aliens in different locations throughout the prison. To help keep things interesting, the action is broken up by some simple puzzle areas where players must navigate maintenance tunnels by disabling various ventilation fans to keep things from spinning out of control to a sharp end like what befell Murphy (Christopher Fairbanks) in the film. Not too far into the game Ripley will get a flame thrower, and this is the only weapon that can destroy the many eggs found in facility’s forgotten chambers. The urgency to destroy those eggs and the resulting aliens, however, isn’t just for show! There’s a finite number of prisoners on the planet…but on top of that THIS Alien 3 game has a timer too! Certain events are going to happen regardless of how prepared or not the player is, the most prominent of which is employees of the Welyand-Yutani corporation arriving to retrieve some aliens and slaughter everyone else. In keeping with the plot of the movie, Ripley takes it upon herself to eradicate any alien presence before the company can arrive.

The resulting game is actually pretty awesome, though it doesn’t really lend itself to playing repeatedly once one has completed it successfully a couple of times. Players have to put up with some bullshit from Superintendent Andrews (Brian Glover, oddly given the rank of Captain here), track down a way to access to the prison’s armory, destroy every alien, track down some heavy firepower to have a showdown with an alien queen, and find a way to repair her escape shuttle and get out…in two hours.

With much of the game spent using weapons ineffective against adult aliens, and a few conversations happening at preordained moments, we see an ambitious effort to create a simple survival horror game. One that gives us an alternative take on Alien 3‘s story, but also makes an earnest attempt to maintain the film’s pace. For hardware as relatively limited as that of the Game Boy, the result is a great game that has a cinematic feel to it and a genuinely atmosphere.