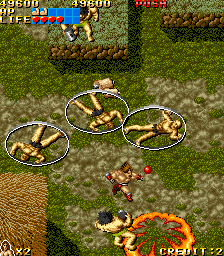 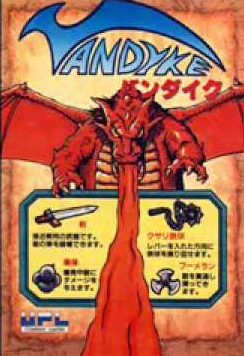 There’s not much context given when you start up UPL’s Vandyke – there’s a dragon on the title screen, and there’s a muscular barbarian, and the speakers roar like an elephant when you insert a credit. It’s an overhead action game, that would technically be classified as a “run and gun”, except without the gunning, since you’re restricted to melee weapons. In the pantheon of other similar games, it’s somewhere between Capcom’s Avengers and Namco’s Legend of Valkyrie. 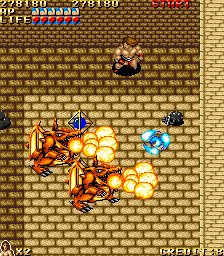 The hero’s default weapon is a sword, which has a short range but is effective against most regular foes. When you find crystals, a little roulette pops up that can potentially give you some new equipment. Some of these include swirling blue-flamed boomerangs and explosive cannonballs, which don’t feel entirely appropriate for the setting, but are effective in killing foes. But by far the best is a ball-and-chain, which not only has a fairly long reach, but can be swung around, taking out enemies in a sweeping pattern. You have a life meter of six hearts, plus picking up muscle icons will increase your attack strength; other power-ups include a bomb that sets everything on the screen ablaze, and a little fairy companion who seems to want to attack enemies by moves too erratically to be much use. You can jump, though other than dodging enemy attacks, there’s not much use for it in most of the stages except jumping on small elevated hills or leaping over rolling logs or boulders. But the fourth stage, a cave filled with molten lava, is largely devoted to platforming, something that never really feels right with an overhead perspective.

At the outset, Vandyke seems like a normal enough Conan the Barbarian ripoff a la Rastan, as you take down hordes of neanderthals and giant scorpions. But halfway through the first stage, it gets kinda weird when half-naked guys attached to gigantic wheels start rolling around the level. The boss is a green three-eyed elephant with a genie-like being on the end of its trunk. Indeed, things have gotten a little bit weird. 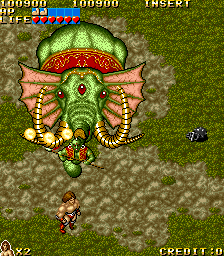 It continues like this through much of the game. There are Harryhausen skeletons, and then there are claw-wielding Japanese gay stereotypes. The second level boss is Medusa, while the next level follows up with a cloaked wizard who shoots worms out of his arms; his cape occasionally drops revealing a shriveled human-like creature beneath. Plus, whenever the hero grabs a power-ups, he stops dead in his tracks, leaving himself vulnerable, in order to do one of several bodybuilder poses. Vandyke predates NCS/Masaya’s infamous Choaniki by nearly two years, and while it’s not nearly as over-the-top, it still shares a similar sense of humor. In practice, it feels like someone’s Dungeons and Dragons campaign that got crashed by some goofball who just wanted to mess with everyone else. If anything, it’s unfortunately restrained, with many of the later areas feeling a little generic. The earliest bosses are easily the most impressive – in contrast, the final battle takes place on the back of a gigantic turtle shell, with dragon appendages that shoot out of its sides, but something about it feels incomplete, like the designers figured no one would ever made it that far. 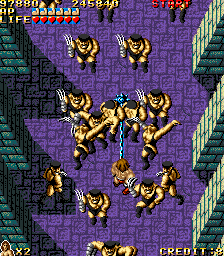 The stages are enjoyable to play through, as the arsenal of weapons is fun to use, making it fairly easy to cut through the hordes of eager prey. The boss fights are substantially more troublesome, because the screen is so cramped and it’s hard to dodge their projectiles. Dying will stick you back with a sword, though many bosses are kind enough to stick extra weapons on the sides in case you need them. Life restoratives are fairly plentiful throughout the stages too, so it can be remarkably generous. However, continuing is completely disallowed, which takes a moderately challenging title and makes it exponentially more difficult.

The skewed perspective makes hit detection a little difficult, especially with the short range weapons. The music is FM synth rock, but it’s typically overwhelmed by the hordes of digitized shouting effects when fighting human enemies. The game is occasionally pretty fun when the difficulty is manageable, and its weirdness makes it just remarkable enough to make it worth a laugh. 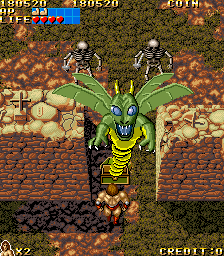 Vandyke was designed by Tsutomu Fujisawa, who worked with UPL through much of the company’s life on their games like Ninja-kun (co-developed with Westone’s Ryuichi Nishizawa), Penguin Wars, Atomic Robo-Kid, and Gomola Speed. UPL had a strong relationship with Jaleco, who distributed the game internationally. After UPL went bankrupt, he formed a company called Scarab, with one of their initial games being the high-speed side-scroller Dyna Gear. While very different games, some of the elements from Vandyke (the goofy sense of humor, the super fun spinning chain weapons) can be seen in that game as well.