The early 90s was a great time for America’s favorite pastime: the arcade scene was the healthiest they’d been in years. The majority of the arcade games that came out during this time either ripped off Capcom’s fighter Street Fighter II or ripped off Capcom’s beat-em up Final Fight. While it didn’t take long for the fighting market to get oversaturated, the beat-em up market fared a bit better with plenty of new and fresh games. We had beat-em ups that took place in the future, in medieval times, and in prehistoric times. We had games based in the wild west and feudal Japan. Even the licensed games were very good, with the X-men, The Simpsons, and Teenage Mutant Ninja Turtles all receiving great titles. Irem decided to infuse some bizarre humor into the genre, and that’s when they made Ninja Baseball Bat Man (Yakyuu Kakutou League Man, literally “Fighting Baseball League Man”, in Japanese). In NBBBM, you play as one of four robotic ninja baseball players. Bizarre enough for you? Let’s meet the team. 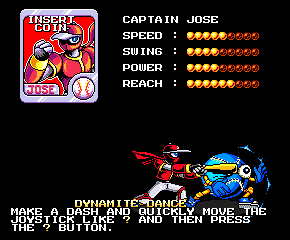 He’s the leader with the all-around average stats. Probably named after Jose Canseco. 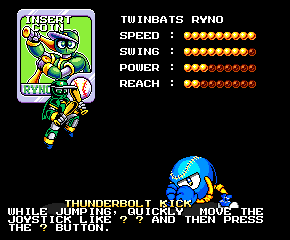 He’s the small guy, but boy is this sucker fast. Not only is he the quickest runner and swinger, but he may be faster than any beat-em up character ever. He holds two very short bats, but he can get like six or seven swings in a second. Most likely named after Ryne Sandberg. 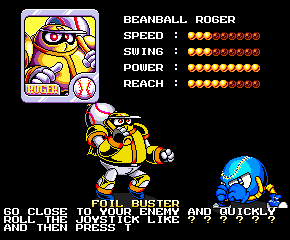 He’s huge, and it’s not the steroids. He is always thinking about food. Very powerful, but that’s offset by being the slowest character. Still, he is faster than the majority of characters from most other games. Probably named after Roger Clemens or Roger Maris. 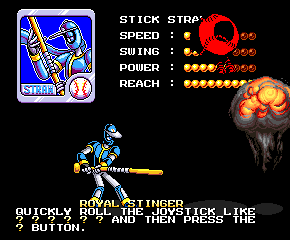 The veteran of the team. Tall and skinny with insane reach. His bat takes up nearly half of the screen. He also has the largest variety of throws. Almost definitely named after Darryl Strawberry. 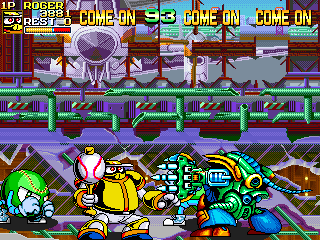 The game opens up with a mysterious person stealing the golden statue of Babe Ruth. The commissioner of the Ninja Baseball League has summoned you to find it along with any other memorabilia before someone sells them and makes a huge profit on eBay or something. As you go from town to town to state to state, you are confronted by hundreds of types of living baseball gear. The most common enemies are anthropomorphic baseballs, who come in all different breeds, from cyberpunk to robotic spiders to zombies. You’ll also find very evil bats and gloves, along with killer catching gear, lunatic lawnmowers, and even some non-ball enemies like octopi, jack-o-lanterns, clouds of smog, playing cards, and my favorite, the mob dogs. All the sprites are drawn very colorfully, probably even more so than The Simpsons arcade game. And there is never a loss of things going on in the background. Some people will be turned off by the overly cartoony graphics, but they hold up pretty well even today. 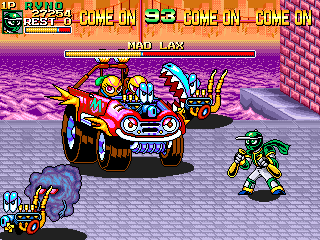 This may sound like all fun and games, which it should be, but there is really a deep fighting system underneath it all. There are only two buttons – attack and jump – but there are tons of special moves and combos. Each character has six, seven, maybe even more unique special moves, including throws, rushing moves, and even a crude form of desperation moves. Pressing both buttons together lets your character find his stance and swing for the fences, at the cost of a little bit of life. When your life is in the red, you gain access to a few more moves that you can pull off in rapid succession. Since these are ninjas we’re talking about, they all know some ninjitsu and elemental magic. They can get small doses of it regularly, but jumping and pressing back, forward, attack lets out a huge explosion. nailing everyone on screen for the low cost of half your life bar. Each guy has a different power: Jose has EARTH (!), Roger has FIRE , Ryno has LIGHTNING (not WIND? Nuts.), and Straw has WATER (so close too). However, even with all the magic, the best move is a good old baseball slide. Just get running and hit attack, and you’ll slide into your opponent, smacking them several times. 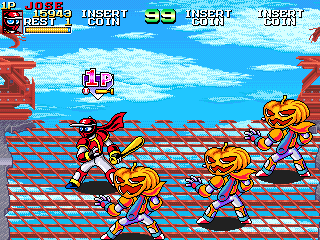 Each character has a bat, so there are no other weapons, but there are a few things to throw. Regular baseballs and bases do quite a bit of damage, but not as much as the black bases, which act like an unlimited supply of shurikens. There is also TNT, which should be self-explanatory, as well as statues of Tanukis and a few different Maneki Nekos (that Japanese cat waving his paw). Then there are the cheerleaders who are summoned with a heart icon (wait, HEART? Why couldn’t Ryno be WIND!). They dance around with a fancy light show and either hurt all the enemies or summon lots of food. (Baseball games generally don’t have cheerleaders, but then, they usually don’t jave any ninjas either). One of the girls will also appear to tell you when to move on in the level. Speaking of food, there are all kinds of it, which restores health. There’s the type of food you’d expect to see at a baseball game, like burgers, fries, hotdogs and drinks. But then there’s also a lot of ethnic Japanese food like rice, sushi, and live eel. 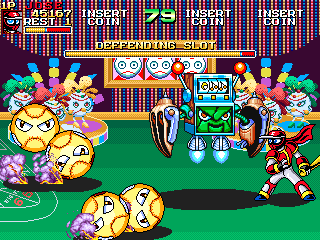 While everything mentioned so far is great, NBBBM really gets its charm by all the little details. Every character has unique animations for getting burnt, electrocuted, frozen, or stabbed. Nearly all of the enemies have different parts you can knock off, and the bosses have entire limbs that can be severed. Various enemies die different ways. When they get knocked out, little baseballs dance around their head. All kinds of things pop out of the background. When the mob dogs get knocked down, they roll over and shake off before getting up. There are just all kinds of cool animations and extra details. 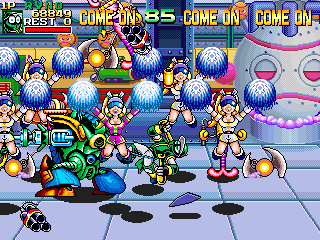 The music isn’t that memorable, but it is very funky. There are all kinds of “Oh Yeahs” and stuff like that, so if you love ToeJam & Earl and the like, you’ll love this. But I would much rather have some of the other Irem offerings on my soundtrack. There’s also plenty of quick samples from a typical baseball organ. 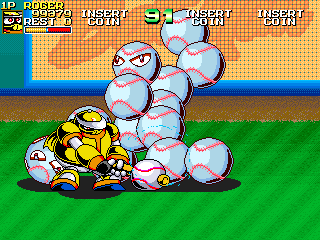 Let’s look at the levels and bosses. You start in Seattle, and the boss is an evil small prop plane. The weirdest part is that you fight him inside a bigger plane. Right before a boss appears, the floor opens up and a few balls pop out and play the trumpets. Very cool touch.

Next, you head to (San Fran)Cisco. Most of the level is on top of a broken Golden Gate Bridge. This is also the first of a few cars you can drive for a short time and destroy everything you see. After a mini boss who is a giant made entirely out of baseballs, you fight Mad Lax, a evil car who spits out little cars.

Then there is the first of two mini games in which you must squeeze a ball via rapid button pressing. If you lose, which you will on a keyboard, the ball taunts you with the Japanese equivalent of the middle finger.

Next is Las Vegas. There’s tons of glitz and glamour. The enemies here stray away from the baseball theme and are mainly based on cards, and very nasty ones at that. How many cards carry flamethrowers in real life? The boss is a slot machine who will pull his lever every once in awhile, causing something weird to fall on you. 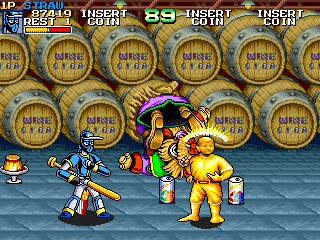 Now, Let’s Go to Texas! Japan must not know much about Texas, since every level so far has been a city, and now we go to an entire state. Everything here is haunted, so prepare to fight poltergeist, zombie balls, evil hamburgers, and a devil that messes with your movement. The boss is a bunch of junk with a buffalo head that walks like a chicken.

Next, on to Florida, another broad location, but we are in a noticeable location – the Everglades. The big thing here is a factory that that turns Tanuki and Maneki statues into enemy balls. It’s a pretty small level that concludes with a mechanical gator boss. Going back to those nice little details, beating the gator turns him into a mechanical purse.

After another minigame, you move on to Chicago and fight the mob dogs. Like Vegas, there’s almost no baseball here (kinda like the Chicago Cubs) and it’s just you against the dogs. The boss is a bit disappointing, just a bigger dog with ribbons in its hair and a shotgun, but it reveals that the mob dogs are the real reason why Prohibition was such a disaster. 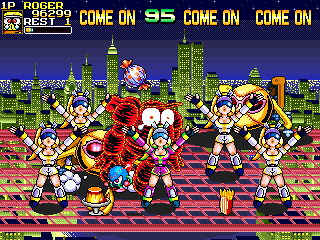 On to the final level, but not before the real secret is revealed. The bad guy before it all is “The Commissioner”. So while most of the stuff in this game is ridiculous to the point of absurdity, one thing is grounded in reality: the commissioner is evil. Anyway, it says the last level is New York, but it looks almost identical to the first stage of Teenage Mutant Ninja Turtles: Turtles in Time, which…was also in New York. Seriously, you’re on a catwalk high above the illuminated city just like that game. At least it looks much much nicer here. And, this has something Turtles doesn’t have – a floating baseball stadium. Jump in it and onto the field to fight another ball giant, another and much harder plane, and the final boss. Teenage Mutant Ninja Turtles may have Super Shredder, but Ninja Baseball Bat Man has Super Babe Ruth. Yep, put all the memorabilia together, and you get The King Babe. He looks more like a mutated football player, but he has a monster of a bat that shoots out tornados. When you beat him, the commissioner, who was riding on his back, pleads his case, but Jose quickly bats him to the moon. And the moon isn’t too happy to see him. 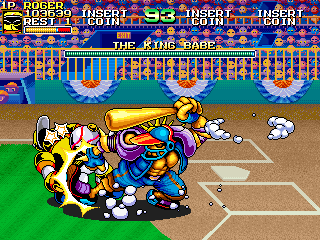 Other than the name change and a few story scenes, the English and Japanese versions are practically identical. However, in the Japanese version, the fighters are all named like sentai heroes, using boring names based on their colors. And the title screen has a closeup of Jose/Red.

Sadly, this game never went anywhere after the arcades. Speaking of Irem, while they would much rather make shoot-em ups over beat-em ups, this isn’t completely out of their league. Just a year before this came out, they turned the live action Peter Pan film Hook into a surprisingly good brawler. They also put out the great post-apocalyptic Undercover Cops that year, too. And of course they were responsible for the classic Kung Fu Master in 1984 and a few other early beat-em ups. Interestingly enough, this game was actually conceived in the American branch of Irem, though the game itself was still developed in Japan. The idea came from National Sales Manager Drew Maniscalco, and the artwork was by Gordon Morison, an artist who worked on many of Gottlieb’s pinball machines. Still, they’ll certainly always be known as the R-Type guys. 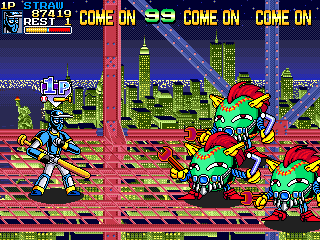 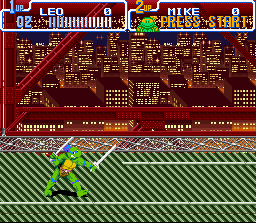