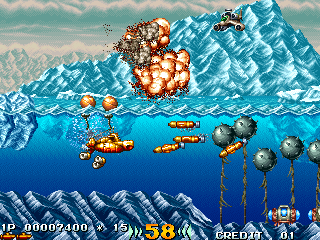 The 1990s was not too kind to Japanese company Irem, best known for classics such as Moon Patrol, Kung-Fu Master and the R-Type series. The once-prolific arcade and console game developer was in a slump due to a lack of major hits compared to their golden years, and were nearly on the verge of collapse. This led many of their games being confined to their homeland of Japan or in other cases, such as the critically-acclaimed Ninja Baseball Bat Man, be exported internationally in extremely-limited numbers. Even in this dark age, Irem was still committed to producing quality games that continue to have a lasting legacy on the people who played them, even today. One such game is In the Hunt.

Known as Kaitei Daisensou in Japan (meaning “Undersea War”), In the Hunt debut in April 1993 and ran on the Irem M-92 arcade system. It is noteworthy for being created by the same group of developers who later went on to form Nazca Corporation, best known as the creators of the Metal Slug series. The similarities between Metal Slug and In the Hunt are uncanny, from the overwhelmingly-detailed graphics to the brisk, action-packed soundtrack. Japanese audiences rank it among the very best games by Irem and see it as a cult-classic, while internationally it is mainly known through message boards and collector’s circles. Which is a shame, because it’s actually a really fun shooter with some unique mechanics that help make it stand out from the rest.

In the Hunt can be best-described as a cross between R-Type and the aforementioned Metal Slug. Assuming control of the “Granvia” submarine, the player is tasked with eliminating a top-secret organization known as the Dark Anarchy Society (DAS) before they launch a powerful super-weapon to destroy a now-desolated planet Earth, which due to the melting of the polar icecaps caused much of it to be flooded. The Granvia can fire torpedoes both forwards and upwards to attack enemies; firing upwards will also launch slow-moving but powerful depth charges that explode upon contact with anything beneath it, which can be useful for taking out enemies or other obstacles below you. Unique to In the Hunt is that the player can control the scrolling of the screen, and can either make it move faster or slower by respectively moving forwards or backwards. This allows the player to play at their own pace, an idea almost unheard of for shooters at the time – don’t take too long though, as there’s a nasty time limit ticking down as the game progresses. The Granvia can pick-up power-ups that greatly resemble those in R-Type, such as a powerful machine gun, wave-like shots and “cracker” shots that launch a barrage of bullets towards enemies. There’s a two-player mode as well, which is nice. 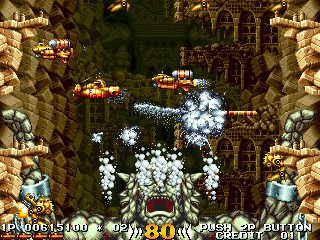 Graphically, In the Hunt is incredible. Anybody who has played Metal Slug will immediately notice the similar visual style and superbly-animated sprites. Combining that with detailed backdrops and vibrant colors and you’ve got yourself an absolutely-gorgeous 2D shooter. Sadly the same can’t be said for the soundtrack, as it is a bit more of a mixed bag compared to the rest of the game. Some tracks are really-well done and catchy, namely the song for the first stage (“South Pole”), while others feel pretty generic and don’t do a great job at capturing the essence of an underwater battle. Interestingly enough, Metal Slug composer “HIYA!” was set to do the music for this game, before at the last minute being pulled from the project to work on Image Fight II.

In the Hunt definitely has a lot going for it, but it does have its flaws. The biggest gripe is the difficulty, which can easily drive a person absolutely nuts. Some of the stage designs feel deliberately cruel at points, such as vertical-scrolling stages having long corridors that drag on for too long only for the player to get ambushed by an onslaught of enemies they couldn’t see beforehand. With lightning-quick projectiles and massive waves of enemies, it definitely gives the R-Type games a run for their money in terms of having a brutal difficulty. The game is rather short too at only six stages, although they’re pretty long and take some time to finish. Some players might also be put off by the slowness of the Granvia as well (which a lot of video game magazines at the time were), but it’s not too bad. With these faults in mind though, In the Hunt still manages to be an entertaining shooter with some unique ideas, and a hidden gem that has sadly gone mostly unnoticed by arcade game fanatics. Players who love the Metal Slug series will likely love In the Hunt as well. In 1994, a year after the game was released, Irem closed down their video game divisions to focus on restructuring itself, making In the Hunt one of the company’s very last arcade games. While not one of the best shooters in the world, it was definitely a good place for the powerhouse behind R-Type and Ninja Spirit to end on. 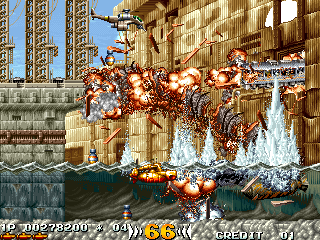 In the Hunt was ported to the PlayStation and Saturn in 1995, courtesy of THQ (under their Kokopeli brand) and Xing Entertainment respectively. In most cases with shooters the Saturn version would easily topple any other version, however with In the Hunt the PlayStation version is actually superior to the conversion on Sega’s 32-bit machine, featuring little to no slowdown and still keeping the gameplay that made the original so great intact. The Saturn version, meanwhile, has plenty of slowdown in places alongside the addition of an unimpressive, boring opening cutscene. Rumor has it that it will outright refuse to work on certain versions of the console as well. Xing also made a Windows 95 version in 1997 exclusively for Japan, which while still having slowdown (and some annoying sprite flicker) is a major improvement over the Saturn version, even including a rapid-fire option. All three of these ports contain a re-arranged soundtrack as well – the Saturn version excels at this and is pretty good, while the other two have generic music in place of the original compositions that is mucky and boring. Most recently, Hamster Corporation released In the Hunt for the Switch and PlayStation 4 as part of their Arcade Archives series – with plenty of bonus features and online leaderboards, it’s the best way to play the game. 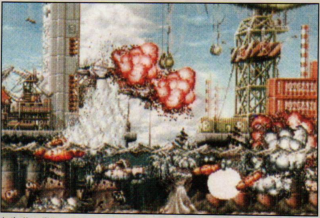 An SNES port of In The Hunt was in development, even being shown in a playable form at the 1994 Consumer Electronics Show. It was ultimately never released, although when you take into account how much of the game would likely be cut down due to hardware limitations, and that Irem were notoriously awful at programming for the SNES, it’s likely for the best it never saw the light of day.