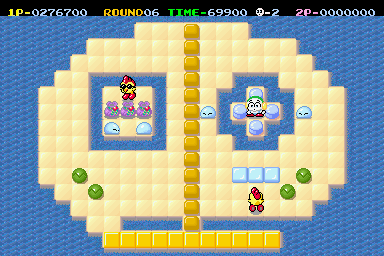 Grid-based puzzles have been around for centuries. The classic sliding-tile puzzle, often seen at infuriating moments in video games, was created in 1880. Since then, many takes on puzzles which operate in a two-dimensional space utilizing tiles and navigation towards a goal in some form have taken many shapes. One of the most influential video games utilizing this concept is Hiroyuki Imabayashi’s Sokoban.  Undoubtedly, Sokoban was inspiration for both Coreland’s 1982 release Pengo, a game utilizing some of these concepts in a more weaponized format, and HAL Laboratory’s 1985 release Eggerland, better known in the west as Adventures of Lolo in 1989. So what happens if one were to take Pengo and Eggerland and make a cold smoothie? You’d get Irem’s Kickle Cubicle.

First released as an arcade game in 1988 in Japan under the name Meikyuujima, (“Maze Island”) it would eventually be remade in 1990 and released in the West under the name Kickle Cubicle on the Nintendo Entertainment System. Taking the role of Kickle (curiously this is his name even in the original arcade release), the player must navigate a series of frozen islands by utilizing freezing breath and the construction and deconstruction of ice columns. The goal of each level is to retrieve three Dream Bags per island.

The story is different depending on if one is playing the arcade or console versions. In the arcade version, Kickle acts on behalf of a wise old man who is loaded with eastern mythical motifs. The Dream Bags were granted to the old man by a god who grants good dreams. The various tricky critters of the game stole them for themselves. In the NES version, the Magic Kingdom has been sunken under a series of frozen islands due to the powerful magic of a giant snowman called the Wizard King. He has conquered the palaces of the Magic Kingdom and stuffed it’s inhabitants, who consist of sentient fruits, vegetables, sweets and toys, into the Dream Bags. In both cases, Kickle is alone in recovering the bags and defeating the leaders responsible for the situation.

Being a puzzle game in nature, most of the challenge of Kickle Cubicle comes from the challenges the environment presents and figuring out how to solve them. Each island consists of a tile-grid area that largely consists of ice and arctic water. Upon said ice are a majority of the puzzle elements that must be contested, including, but not limited to, indestructible blocks, springs, rotating hammers, covered ice and large-bore floor perforations.

Enemies largely consist of various cute little jerks that wander around and complicate matters in some fashion. Kickle’s freezing breath is the basic form of defense against these bag-hogging buffoons. One puff of frost, and most will glaze over allowing Kickle to walk up and kick the frozen foe, shattering them. Several of the enemies are, however, directly involved in actually solving the puzzle of each island. One in particular is key. The Noggle (or Watt in the Japanese versions) is a small blue blob that when hit with Kickle’s freezing breath will instead turn into an ice cube. When kicked, said cube will slide across the open area along its path until it either comes in contact with a solid obstacle such as a wall, or into the open waters at which point the tile the block fell into will fill and become a standard ice tile. Kickle must be cardinally adjacent to a block to kick it on it’s way. Kickle’s ability to construct columns of ice is one of the many tools that the player must utilize to direct ice blocks and other hazards to achieve success. 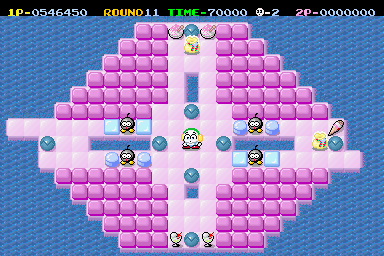 A majority of levels revolve around using ice blocks to fill in gaps in order to reach a given destination. The ultimate goal of all islands is to collect the three Dream Bags. Some maps have them clustered in one location, others have them more spread out, resulting in maps with multiple goals. Should Dream Bags make contact with an enemy or a speeding ice cube, they will be displaced to a randomly adjacent tile. Joining the Dream Bags are score items that consist of varying kinds of ice cream. The game incentivizes kicking blocks as an ice cube colliding with ice cream yields double-points. All ice cream does have the odd function of blocking anything that isn’t Kickle or a cube. The NES version, however, only has one form of ice cream, resulting in bullet-proof popsicles. Occasionally a rare pick-up will spawn mid-level that will convert all of the walkable space in the level to tiles with food on them, resorting in many bonus points and a free pass to the next level. More advanced levels often involve utilizing enemies or objects that manipulate ice blocks from positions that Kickle can’t reach himself. The arcade version has a total of 40 levels, while the NES version has four ‘lands’ that have around 16 or 17 levels each, in addition to 30 levels after that. Some of which are real brain-busters.

Given the puzzle-based nature of the game, it might come as a surprise that there are boss fights. The boss fights are a divergent point between the versions. In the NES version, each boss occupies a palace which is accessible only once the realm that they preside over has been destroyed, while the arcade version simply has a boss every 10 levels. Those familiar with the NES version would tell you that the bosses, with the exception of the Wizard King, consist of extra-large versions of some of the regular enemies which all operate in some variation of the pattern of ‘throw object, object impacts into four smaller objects, smaller objects can be kicked into the boss’. The Wizard King deviates from this only slightly, but does provide the satisfaction of kicking a 2×2 block of ice into his pail-wearing face. In the arcade version, however, the bosses all share the old man’s eastern-myth aesthetic and are based on various mythological creatures. None of the bosses are fought like one another and are a clear cut above their NES counterparts. 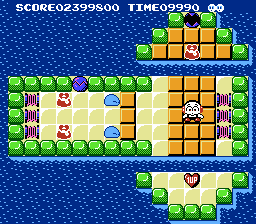 Graphically, both versions have clean but simple visuals, opting more for visual distinction than artistic flair. For a tile-based puzzle game, this is a good approach. Even with that, all of the game entities are cute and pleasant to look at, if a bit simple. Oddly Kickle’s arcade appearance had golden ear-muffs for some reason, perhaps to match his flying cloud. When the NES versions came around they were made red to match his pants and balloon which replaced the cloud. Audio wise the games are pleasant but not particularly notable. All levels have the same single music track which is catchy and inoffensive, but can suffer from repetition fatigue. Bosses have the same track which serves its purpose well enough. The NES version has more music, by virtue of having more situations for there to be music, which predominantly consist of short loops. The sound effects fit and are distinct to a given action, so there’s no aural confusion.

The arcade version of the game has a tile area of 23×14 while the NES version only has 15×13 to offer. This results in many of the levels from the arcade version needing to be pruned down and simplified. This is a good thing because the largest strike against the arcade version is that a bit after the halfway point, a majority of islands become more frustrating than fun. The further one progresses, the more the fact that puzzles requiring at least several minutes of deliberation becomes painfully apparent. Should one die mid-level, any water filled with ice will remain filled. While this sounds good on paper, in practice it means that otherwise contained enemies can get out and be an immediate, unexpected threat. There is a timer for all levels and if it is exceeded, an angry jerk of a star flies down and smashes into Kickle, resulting in a loss of a life. The largest amount of time allotted for a stage is 99 seconds. Eventually the game devolves into credit-feeding just to provide the player with time to look at the puzzle. 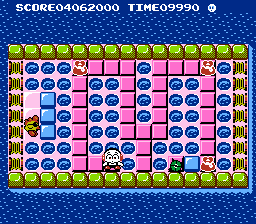 Meanwhile the NES version has further differences between the western and Japanese releases. In the Japanese version Kickle can float about using his balloon to select which level in one of the four lands to do in any order. The levels can be thought of as “mini-arcade levels” in difficulty. The western releases on the other hand have a linear, predetermined level progression and many stages have similar presentations, but easier layouts. On the positive side, this makes learning the game a snap before getting into the meatier islands. The bosses between the two versions don’t differ as much as in the arcade, but are still worth noting as in the Japanese version bosses have more health and aggressive behavior.

Shared between the NES versions are somewhat subtle but loving touches. Upon achieving game-over in the arcade version, Kickle is seen sitting next to a jar waiting to take money, implying that he wants a donation (jury’s out on if Kickle is a demi-god or something) or if he’s somewhat mercenary about saving people’s dreams. In the NES versions, the game over screen will actually change depending on what the last palace you restored was. Should Kickle somehow game over before completing a land, he will be on the game over screen crying about his failure. After completing at least one however, the game over screen will have the most recently rescued princess providing encouraging words. If the main story has been completed, it will be the King. This totals out to 5 distinct iterations of the game over screen and is but one of the many touches that shows that the game was made with care. Other notable touches are a greater variety of death animations, and the ability to speed up text. Should the player hold a button on a second controller on the title screen, Kid Niki the Radical Ninja will make a cameo.

While not at all subtle, the greatest difference, however, is that the NES version has infinite continues and can be paused at any time. This results in a far less frustrating and stressful experience as the player can take all the time needed to ponder and execute an attempt at a solution. It sports more simple and fun levels while keeping the heavier puzzles for the extra stages. This combined with the larger level variety, and the loving touches, make the NES version pretty much the definitive version of the game.

Kickle Cubicle is a fun little diversion that takes a basic formula and gives it ice skates. When it works it’s amazing and when it doesn’t it’s infuriating. The NES version definitely leans harder towards the former than the latter, but it still has its moments that will leave the player simply starting a stage and immediately pausing to sort out the puzzle within the safety of timelessness. Assuming basic puzzle competence the game is easily completed in less than 8 hours for the NES version. With precognition or an excessive degree of memorization combined with a bag of credits, the arcade version is beatable in less than 4 hours. Charm practically radiates from the cute designs, the catchy if simple music and the sheer fun to be had. It is unfortunate that there was never any kind of follow-up, and as such Kickle Cubicle is a bit on the obscure side. A PC Engine port was also planned, but ultimately it was never released.Unfortunately Irem never really did anything notable with Kickle afterwards. Still, it’s is easily approached by puzzle veterans and newcomers alike and is a great way to pass a dull afternoon. 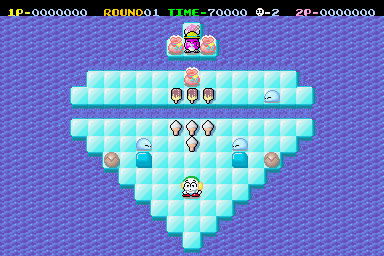 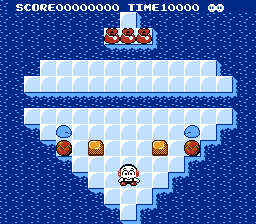