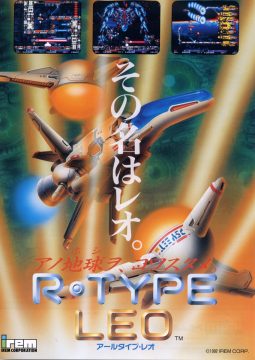 R-Type Leo is considered the black sheep of the series. Not because it’s particular bad or anything – it’s quite a bit better than R-Type II – but because it barely plays like an R-Type game. This is because it wasn’t originally developed as part of the series. Rather, it was an original shooter developed by a part of Irem called Nanao (later known as Eizo) who primarily manufactured monitors and other display equipment. Late in development, Irem brought it into the R-Type series, solely for name recognition purposes. As a result, it is considered a “gaiden” game.

Since it’s not really an R-Type game, the Bydo are nowhere to be found. Instead, it focuses on an artificial planet called Eden, which has turned against its creators and launched an attack on mankind. The R-9 Leo is sent in to fight in a war known as the Eden Paradox. 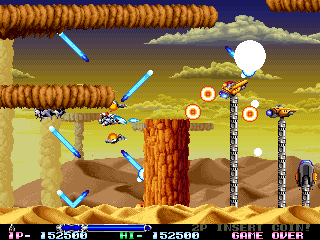 There is no Force pod at all.  Instead, you have two satellites that hover above your ship. As you move forward, they aim backward; as you move backward, they aim forward. Technically your charge shot is gone – instead, the satellites can be fired forward once your power meter is full, which charges automatically. They’ll home in on a foe and do a ton of damage, before almost immediately returning back to your ship There are three different colored weapons, similar to the ones from R-Type, though since the power-up icons cycle when dropped, you can pick and choose which one you’d like to equip. There are missiles and bits too, which, along with the design of the ship, are really the only remaining connections to the main series.  There’s two player simultaneous play, the first for an R-Type game. The overseas (non-Japanese) version even lets you resurrect right where you die, instead of sending you back to a checkpoint. As a result, it’s much less difficult than other games in the series.

The game runs on more advanced hardware than the first two games, but despite running at a slightly lower resolution, the greater color palette allows for much more depth. And it looks absolutely incredible. The visuals move away from the bio-mechanical and are replaced with lush, colorful visuals. In the first stage, floating behind the wreckage of a space station, the bright blue planet provides a contrast to the destruction in the foreground. The descent onto Eden begins in the desert, through a series of ruins, and into a bright green jungle beneath the planet’s surface. The bosses share the same attention to detail, with even the more intimidating insects or robots designed with attractive coloration. 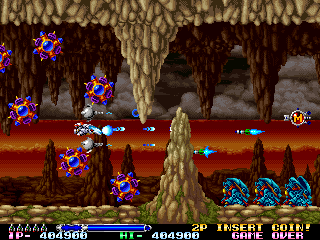 The music is much peppier, too. Each stage begins with a digitized voice countdown – “three, two, one!” – before launching off into stylized house-influenced beats. There’s not much variation in the music – the later levels sound similar to the first – but matches the more upbeat style and pacing.

Some of the later bosses rip off Gradius just a little too much. In particular, there’s a section where you need to dodge between the legs of two gigantic robots is a close variation of a similar segment in Gradius II. Even though it lacks the careful design and required strategy of the other R-Type games, Leo is still damned good, and well worth playing just for the sights and sounds. 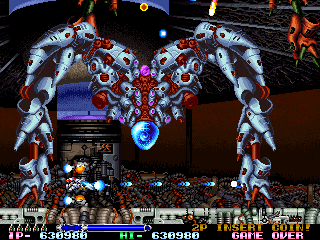 R-Type Leo is also the last R-Type game to be released in the arcades, as subsequent games were created for consoles. It was also never ported to any consoles, and only received consumer release in Dotemu’s Irem Arcade Hits pack for Windows computers, published in 2013. It’s a straight emulation, but the packed-in emulator isn’t as solid as MAME.