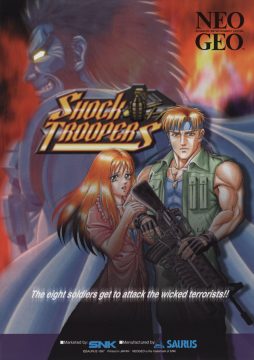 The overhead run-and-gun genre brings to mind classics like Mercs and Ikari Warriors. Arguably one of the best run-and-guns is a series of games called Shock Troopers, which was developed by a team known as Saurus, and was exclusive to the Neo Geo. Shock Troopers was mostly neglected during its time, but has found a cult following via word of mouth (and emulation) in the years since. Like many of its ilk, Shock Troopers is all about marching forward and blowing up things, but rarely did any of its type offer this much variety. With a diverse roster, there are a total of eight different characters to play as. Each has the same kind of weapon, but slightly differs in attack strength, speed, and how much damage they take from getting hit.

Jackal’s girlfriend, Cecilia, has been kidnapped, and it’s up to our heroes to rescue her. He has blond hair and wears sleeveless military fatigues. His statistics are average and his bomb is a grenade that’s thrown with an arc, so it will go over any standard enemies that are directly in front of him. It’s also low powered, but he does get more of them than any other character.

Milky has long blond hair that she keeps out of her face with a pair of shades, and wears shorts. Her speed is high, her endurance is low, and her weapon is average. After her bomb explodes, it will erupt into flame that expands to the left and right. This flame will stay on screen for a few seconds, so it can do massive damage to bosses. However, it lacks the range that most other characters’ bombs have.

Loki wears a sleeveless shirt and has a ridiculous hair style that brings to mind 1980s action movie heroes. His statistics are average like Jackal’s, and his bomb is a rocket launcher that fires a rocket with full screen range that foes significant damage to whatever it collides with.

Southern Cross is a shirtless behemoth with low speed, high endurance, and a weapon that fires two streams of bullets for slightly higher damage. His bomb is a boomerang that moves across the screen on a huge arc before moving back toward his direction (he can’t catch it and throw it again, sorry). If it collides with anything it explodes into two paths that move out at 45 degree angles from each other.

Marie Bee has short blond hair and wears military fatigues. She has high speed, low endurance, and her weapon is average. These are pretty much identical statistics to Milky’s, but her medal rankings are generally not as good. Her bomb is a rocket launcher that fires a heat seeking rocket, but does fairly low damage.

Rio is a large shirtless man with ridiculous pants and shoulder length hair. His speed is low, but not the lowest. His endurance is high, but not the highest. His weapon is average. For a bomb, he fires an exploding arrow out of a crossbow, which will detonate into a path of fairly powerful explosions. Given his look, name, and bomb, it seems like he may be partially based on Rambo.

Maru wears glasses and is the only male character in the game with sleeves. His speed is low, his endurance is average, and his weapon fires two streams of bullets for slightly more damage. His bomb is a canister of poison gas that spreads out in three directions. How poison gas can effect tanks and other vehicles, I have no clue.

Big Mama is a hugely muscular woman wearing a tank top. Her speed is low, her endurance is high, and her weapon fires two streams of bullets for slightly more damage. Her bomb is a rocket launcher that fires an extremely powerful rocket that causes a huge explosion. Since her bomb is so powerful, you get less of them than with other characters. 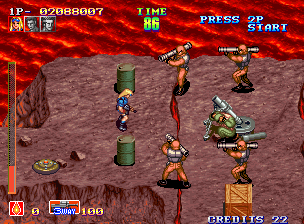 After beginning a game, you can choose to go it alone in Lonly Wolf Mode (yes, that’s how it’s spelled), or you can choose three characters in the awesome Team Mode and switch between them on the fly. The latter of the two modes will cost you a very slight reduction in health, but this reduction is very little, so do not hesitate to select it. Each character will have less bombs in Team Mode, but they each have their own stock, so you actually have more bombs in total.

Along the way you’ll find other weapons with limited ammo in crates or elsewhere. There’s a flame thrower, a weapon that fires in three directions, a more powerful machine gun, and a machine gun with a wider stream of fire, as well as a few rarer and much more powerful weapons like a rocket launcher, a giant laser, and others. Just push A to fire your weapon in whatever direction you are facing or hold the button down to keep firing in the same direction while you move around. This auto-strafing eliminates many of the problems presented in similar games. By pushing C, you can throw a bomb that’s unique for each character. It might move at an angle different from the others, or having homing capabilities, or pass over anything directly in front of you to explode a distance away, or spread out after exploding, or whatever. Like in Metal Slug, making contact with (most) enemies does not result in any harm. If you hit A while directly next to a enemy it will result in a melee attack with a knife. This will generally reward you with a blue gem that is worth big points, so getting good at melee attacks is the key to getting better scores. There are a few other items that you can get via the same method – a red gem that destroys everything on screen, a yellow gem that grants temporary invulnerability, health items, or weapons. 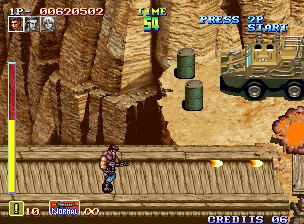 There’s a great deal of carnage in Shock Troopers, but you have been given a very beneficial evasion technique to make things easier to deal with. By pushing B ,you will dash in whatever direction you are holding on the joystick. You are completely invulnerable against every attack while evading, so you are never going to find yourself completely defenseless as there’s always a way out of trouble. Obviously this greatly benefits beginners, but if mastered it also allows Shock Troopers to be played at a very high level of skill. Combine its scoring system with this evasion technique and Shock Troopers has a great deal of room for improvement. In this respect, you might consider it to sort of be an overhead equivalent of Alien Soldier.

There are also multiple routes through the game. Gunstar Heroes lets you choose the order you play levels in. Metal Slug 3 has branching paths through levels. Shock Troopers combines both of these ideas in a fairly novel way. You choose from three sets of three levels, then three sets of two levels, then play a final level for a total of sixteen levels and nine possible paths through the game. The level designs themselves are impeccable – there isn’t a boring level in the game – so the replay value is pretty much limitless. Most of the time you are simply running around and blasting away at everything in sight, but there are a few sections that change it up a bit, like a mountain climbing section and others. If you are trying to 1cc the game or go for a high score, you’ll find that certain combinations of levels are easier than others or allow for higher possible scores – upping its already fantastic replay value even higher. Also, characters get medal rankings when beginning each level. Heart medals will grant a health boost and star medals will grant a speed boost. 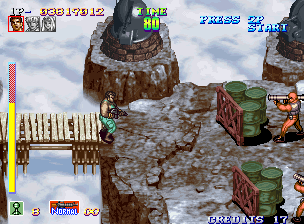 Shock Troopers also has fantastic presentation that ranks among the best in the genre. Its music is pretty great, and each character has a couple of their own voice samples and their own specific voice actor. As the credits amazingly reveal, The Commander is actually voiced by Meijin Takahaski, the guy who served as the basis for the main character in Adventure Island. It would have been easier to resort to mirror images of sprites for walking and bomb throwing animations when your character changes direction between left and right, but Saurus actually took the time to draw different sprites for each of the eight directions that you can move in. So if your character is a lefty while facing left, then they will remain a lefty when facing right. When enemies are shot, they will spurt fountains of blood or even lose entire limbs and then slump down on the ground. Like in Hollywood movies where a character can’t seem to fall down as long as they are being riddled with automatic weapon fire, a few enemies can briefly be sort of “juggled” if you keep shooting them after the shot that kills them. They even gave each character their own victory animation after a level is finished. Backgrounds look great as well, and have awesome details like shimmering light reflected off of water in a cave or a monkey that runs across the screen in a few of the levels.

Shock Troopers takes the familiarities of the genre, refines it, and makes for what is easily among the best run and gun video games ever made. Its designers made no attempt to hide its inspirations. There are a few possible references and a few obvious references to other run ‘n’ guns in Shock Troopers. For instance its main character is named Jackal. This could very reasonably be a coincidence, but his bombs are EXACTLY like the bombs in Jackal (though Jackal‘s bombs are identical to those from Commando). Most obviously though, is that the first level boss from Mercs is recreated five times throughout the game as bosses. In the first level of Mercs, there is a boss fight that involves a hovering jet that rises up from behind a cliff and begins firing machine gun fire at your character. In Shock Troopers, in different levels you will eventually come to a cliff ledge which a helicopter rises from behind and begins firing machine gun fire at your character. There’s even a vehicle with spikes on its chassis that drives forward, like one of the bosses in the original Contra. 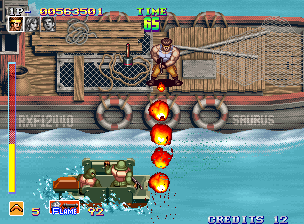 Shock Troopers never received any official ports until the 2008 release of the SNK Arcade Classics Vol.1 for the PlayStation 2 and PSP. Unfortunately, this version is emulated terribly – the game runs at a fraction of the intended speed, and pauses for a split second to load new data, which happens fairly frequently. There’s also some annoying loading between levels. Thankfully, subsequent emulated versions, including the Wii version of this compilation, as well as the Neo Geo Station versions on the PS3/PSP/Vita, are much better.