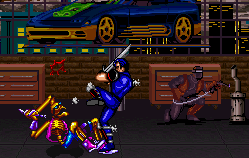 Apparently, the Double Dragon animated series hadn’t done enough damage to the franchise on its own. Among a variety of action figures and vehicles, there was also this particular Street Fighter 2 clone, the genre du jour for licensed games if it wasn’t a platformer, kart racer, or party game. As per usual, Technōs had nothing to do with this, so this particular game comes from Leland Interactive Media. If you’re not concerned yet, remember that these are the same people who gave us Brute Force. 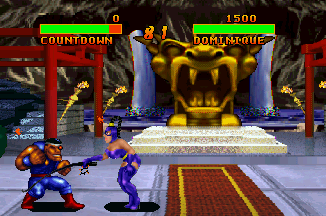 Double Dragon V is based entirely on the animated series, meaning that it’s likewise Double Dragon in name only. The character lineup is pretty odd, as well, with Billy & Jimmy being the only heroes among twelve different characters, even though the cartoon had “honorary dragons” show up and leave all the time. The rest of the cast is made up of recurring villains from the show, including big bad guy Shadow Master, generic mook Blade, and the bumbling henchmen Icepick, Trigger Happy, and Countdown. Other characters are exclusive to the game, including Bones, a skeleton with a machine gun, a pink vest and eighties shades – this game does not deserve such a cool character. There’s also a dominatrix as a subboss, because dominatrixes make great characters for children’s media. 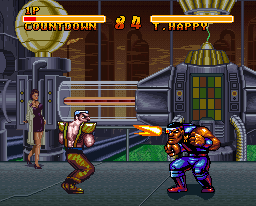 Along with the standard arcade mode, there’s actually a Story Mode to the game, which at least provides some flimsy context to the fighting. The Dragons’ plotline has them going around beating up the Shadow Warriors to prevent them from unleashing a deadly plague, while the evil characters get a plotline about fighting to see who gets to become the Shadow Master’s second in command. All of this is contained in a single still image and a block of scrolling text, which never gets more complex than “Shadow Master made an evil Jimmy clone, go beat him up”, but it’s an honorable, if rather misguided, effort.

Unfortunately, when it comes time to actually play the game, it’s a pretty terrible, barebones fighter that offers nothing that hadn’t already been done in 1991. Every hit you land shoves your opponent backwards, removing any kind of combo potential and forcing you to constantly have to edge towards your opponent. The biggest crime, however, is the odd stat system the game uses, where you have to allocate a certain number of points between your damage, your defense, and the effectiveness of your special moves. If you leave everything at the default, you’re generally going to do pitiful damage, with defense to match. And since most special moves are incredibly easy for the AI to stop before they ever happen, your best chance is disabling your special moves entirely and investing the extra points in your damage output. 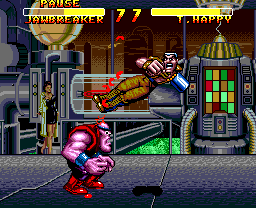 About the only real surprise the game has to offer are the Overkills, which are basically character-specific KO animations. On the final round, if you land an attack of a certain strength that varies by opponent, the other character will be defeated in a particularly spectacular fashion. The Lees skeletonize, Countdown has his robotic arms fall off, and the dominatrix turns into a pile of worms. They’re not particularly violent compared to, say, Mortal Kombat, and some of them leave the opponent only incapacitated. That said, it’s still rather odd that the main character of a children’s cartoon, who’s an avowed pacifist, at that, can freely murder his own brother. The game makes no note of this, and Jimmy only shows up mildly bruised on the traditional “post victory” screen.

The SNES and Genesis versions of the game don’t differ too much from each other in terms of gameplay. Some of the backgrounds use different colors. The Genesis version comes with an MA-13 rating, apparently justified by a few blood splatters when characters get hit. There’s also an odd difference in one of the Overkills. If Sickle is Overkilled in the SNES version, he drills himself into the ground and looks somewhat annoyed. In the Genesis version, on the other hand, he falls over and is impaled by one of his own arm blades. The European release of the SNES version is also missing several characters for some reason, but makes the two bosses playable. 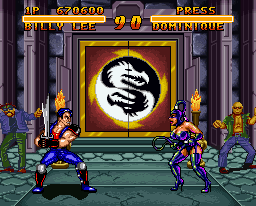 The version on the Jaguar – supposedly the most technologically advanced platform – suffers from a smaller cast, no Story mode, and characters that do even less damage than before. The graphics have been recolored to use a larger palette, but the shading is somewhat cheap-looking. Parts of the backgrounds are also replaced by ugly CGI elements. The controller certainly doesn’t do this version any favors, either. 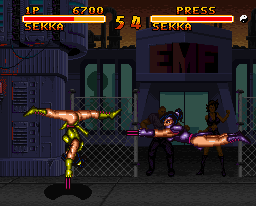 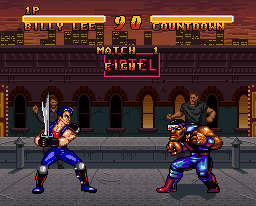 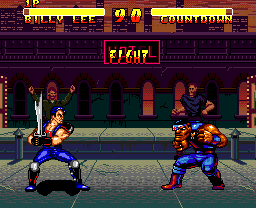 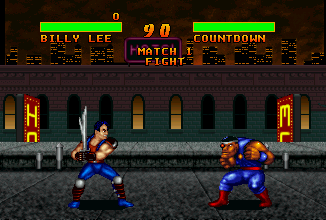 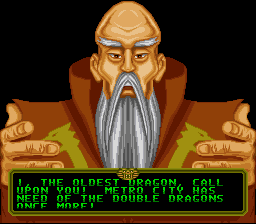 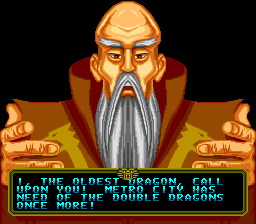