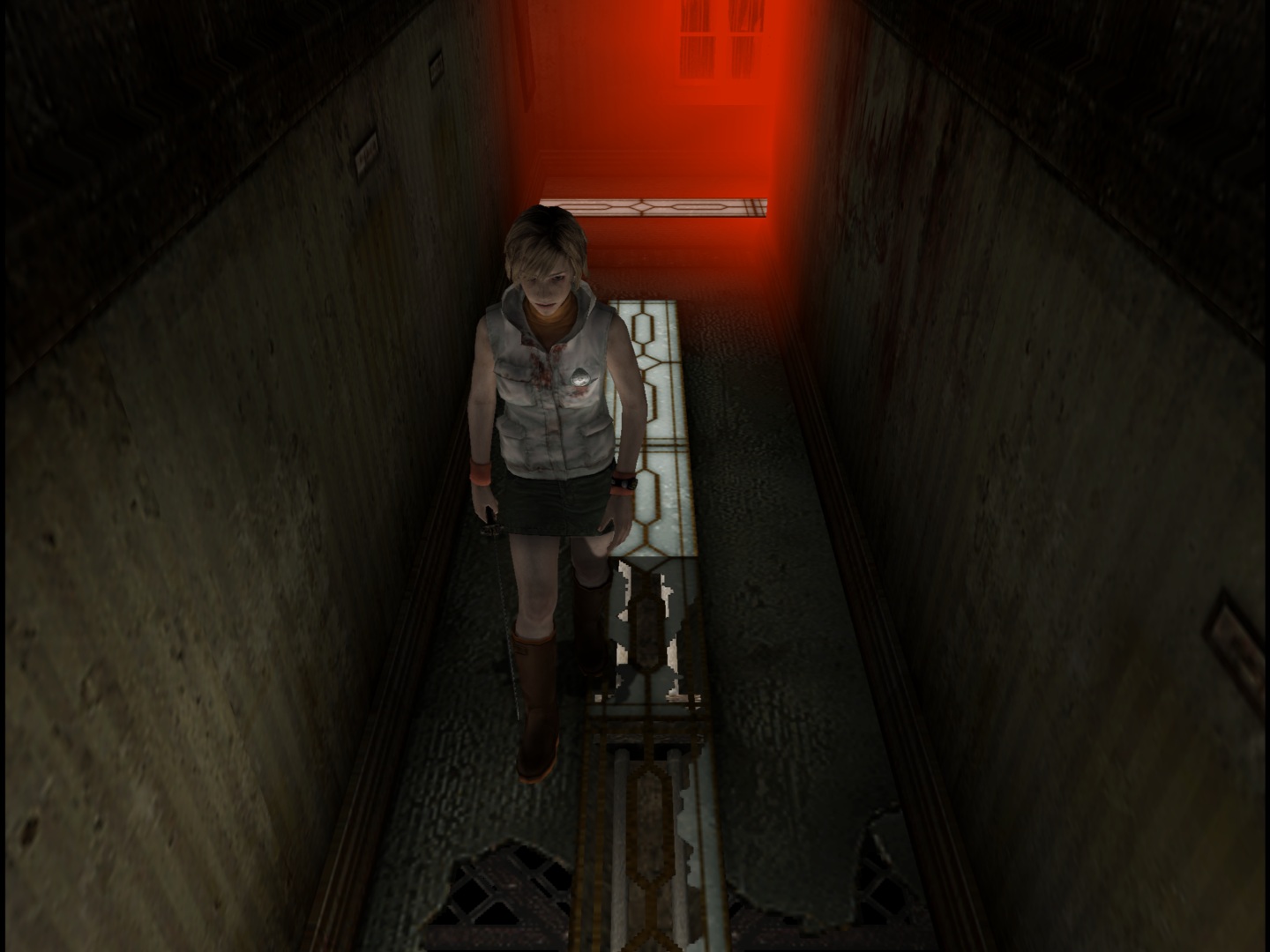 Right after the release of Silent Hill 2, Team Silent turned right around once more to start development on not one, but two, new titles, one of those being Silent Hill 3, released in summer 2003 on the PS2. The game revolves around Heather, a 17 year old girl from Portland. She wakes up from a nightmare in an eerie theme park in Silent Hill, after falling asleep while out running errands for her dad. As the game goes on, she discovers her connections to the town of Silent Hill.

For the first time in the series, Silent Hill 3 stars a woman. Heather is a normal teenage girl, sprinkling a dry sarcastic wit over her observations and dialog. At one point, after getting a key from the stomach of a roasted dog, she quips that there’s nothing to more to be worried about, except who would be sick enough to roast a dog. She’s shown as resourceful, clever, and independent, despite the creepy and upsetting situation. For a series that often uses women as props and motivations for its male protagonists, Heather is a breath of fresh air. Along the way, Heather runs into Douglas, the private detective sent to find her, Claudia, the mysterious woman connected to the Order, Silent Hill’s cult, and Vincent, a bespectacled man also involved with the Order but with different ideas as to what direction it should go in. 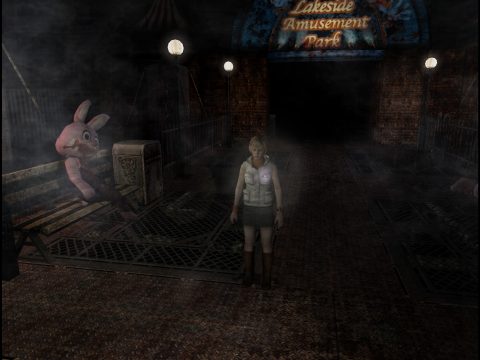 While it’s strange for a Silent Hill game to largely begin outside of the titular town, the game makes it work. Heather leaves the mall for a subway clearly inspired by NYC, a cavernous underground sewer-like place and a dilapidated office building, each with a strange normal world and shadowy Otherworld form. The foggy town, when it shows up later in the game, is essentially identical the one seen in Silent Hill, with Heather running past many familiar landmarks like Pete’s Bowl-o-rama, Heaven’s Night, and Texxon Gas, as well as returning to Brookhaven Hospital at one point. However, she gets to explore more of the town not seen in the games yet, like the aforementioned Lakeside Amusement Park and the chapel where the Order resides. Both, like many important places in the series, are located on the other side of Toluca Lake, and naturally, the entrance to the chapel of a secret cult is through a theme park. One amusing, almost-out-of-place sequence has Heather going through a narrated haunted house at the amusement park, with different exhibits offering jump scares and threats as the narrator blandly describes stories of murder and suicide. The haunted house ends with Heather being chased down a hallway by red mist that will instantly kill her if she’s too slow.

While some of it is campy, the game is no slouch when it comes to the horror department. As much as the entire series owes a debt of visual inspiration to Jacob’s Ladder, the 1990 movie starring Tim Robbins as a Vietnam vet dealing with PTSD back home, Silent Hill 3 perhaps wears that influence the proudest on its sleeve out of all of them. The twitchy effects the movie is famous for, lending an unsettling effect to movement of actors, are emulated to a T in the game. As Heather descends into the Otherworld of the mall on an elevator, she’s confronted by gruesome figures, their faces vibrating, crawling around aimlessly and fiddling with valves. All the familiar touches in the Otherworld segments are present, the rusted, blood-covered, industrial feel the series is known for, but the aesthetic is pushed further, deeper, and darker than before. Paintings of eyes blink on canvas that look suspiciously like skin. The walls become strained and out of focus at one point, with blood falling upwards behind their frosted glass-like appearance, and paintings of eyes vibrating wildly on canvases that looks suspiciously like human skin. Team Silent pushed themselves in this regard and the result is a visual feast of macabre images. 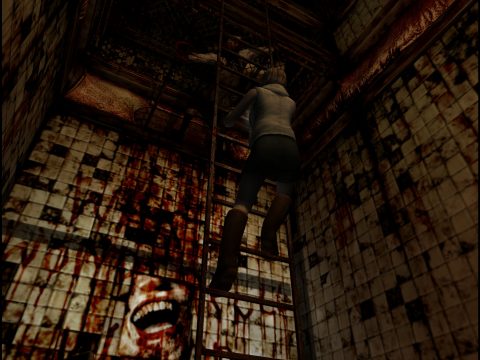 Akira Yamaoka is once again at the helm of the sound and music, so Silent Hill 3 continues the series’ trend of sounding like a nightmare in the best way possible. Vocals are used more this time in the music, provided by voice actress/singer Mary Elizabeth McGlynn. The ambient industrial sound of the earlier games becomes more of a cacophony here, with several tracks feeling louder than before, and these loud moments can jump out after several periods of no music. The voice work is on the same level as the previous entry, full of the odd sounding, but memorable performances. Heather Morris, who plays Heather, sells the character’s teenage vibe and dry wit, Claudia’s self righteous piety comes through from Donna Burke’s performance, and Clifford Rippel’s portrayal of Vincent is as jovial as it is menacing.

Enemies are designed to be much larger this time around, perhaps to highlight the difference in size with the teenage protagonist. The towering Closer, the first enemy that that Heather encounters in the Mall, lumbers with its wide, wrecking ball arms swinging and cylindrical head twitching. The massive humanoid creature called the Insane Cancer plods toward Heather and takes a ton of ammo to take down. Numb Bodies, wobbly looking bipeds with cracked, graying skin, hop around and attack in groups. Another first in the series, enemies can be distracted, using beef jerky that found around the environment, and Heather can even block attacks. Since many of the monsters in the game seem to soak up most damage, even on lower difficulty levels, it encourages a small degree of stealth. It’s not intricate – Heather’s no Solid Snake – but often, it’s wiser to save ammo for bosses and larger enemies by distracting and running past smaller ones. Silent Hill 3’s boss fights are more varied than previous iterations. Before leaving the mall, Heather has to make her way past a giant worm with a head that opens like a flower to reveal a large set of teeth, a la Tremors, and pops out of six different mine shaft-looking areas. 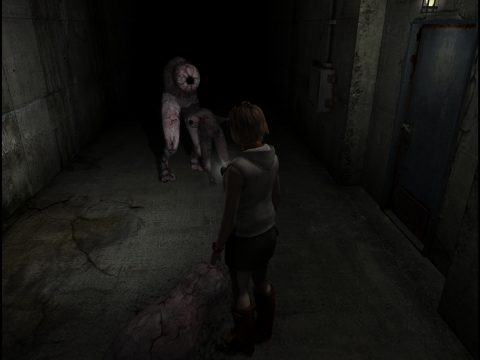 Silent Hill 3 plays much the same as Silent Hill 2. The inventory gets divided up into categories this time, Items, Weapons, and Supplies. The map still catalogs lock doors and dead ends. Heather moves as cumbersomely as the previous protagonists, but unlike the middle aged men, it takes longer for her to be out of breath. There’s the standard set of guns, with a shotgun, pistol, and sub-machine gun, for Heather to use to defend herself. She can also find much more powerful melee weapons than earlier entries, like a katana and a mace, not even including the unlockable weapons.

Puzzles this time around are more grounded. Heather uses tongs to retrieve something fallen behind a crate. Another puzzle has her jimmying open a stuck drawer with a screwdriver and using the rope she finds inside to climb down an broken elevator shaft propped open with a jack. The game once again employs a split difficulty level, one for action and one for puzzles. Some of the more esoteric riddles are reserved for harder levels. For example, the first major puzzle of the game, at the normal and easy levels, involves rearranging five books on a shelf to discover a random door code. On the hard difficulty, the books become five Shakespearean tragedies that need to be arranged in order based on a clue that makes specific reference to each play.

In comparison to the previous two games, there are a dearth of endings in Silent Hill 3, making the game feel shorter. (There is still a ridiculous, hidden UFO ending, of course.) Perhaps to make up for this lack of conclusions, the game offers unlockable items, like the totally-not-a-lightsaber Beam Sabre, and various t-shirts and costumes for Heather to wear, including ones from now-defunct publications of the time like GamePro and PSM. One costume even transforms Heather into a magical girl, like Sailor Moon. Also, if a save game from Silent Hill 2 exists on the same PS2 memory card, then there are some callbacks to that game, including Heather refusing to stick her hand down a toilet. 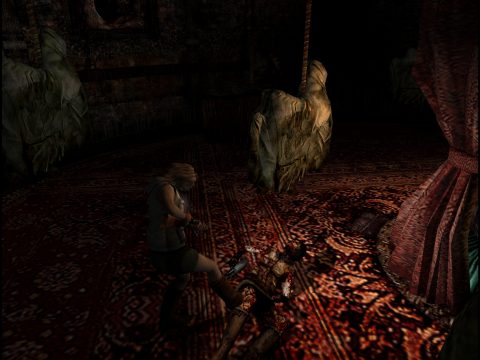 Overall, Silent Hill 3 is just as visually and aurally effective as the previous games, and Heather is a great protagonist. But it can’t help but feel like it’s missing some of the things that made the first two games so special, as it iterates more of what came before it as compared to doing something truly groundbreaking. Much of this has to do with its central narrative filling in the blanks left by the first Silent Hill, which sounds like an interesting concept, but in practice, isn’t really anything spookier than a typical supernatural cult.

Silent Hill 3 dropped first in Europe, in May 2003, then in Japan in July, and finally August in North America. It also saw a PC release, with the same enhancements as before, including saving anywhere and better graphics options. Silent Hill 3 was the other title Konami packaged as part of Silent Hill HD Collection, on the PS3 and Xbox 360, with the same enhanced resolution over the PS2 version and with many of the same issues that plagued Silent Hill 2. Unfortunately, unlike Silent Hill 2, the only voice over option is the newly recorded ones. The new voice work for Silent Hill 3 is fine, but it seems unnecessary given how well the performances came out the first time.