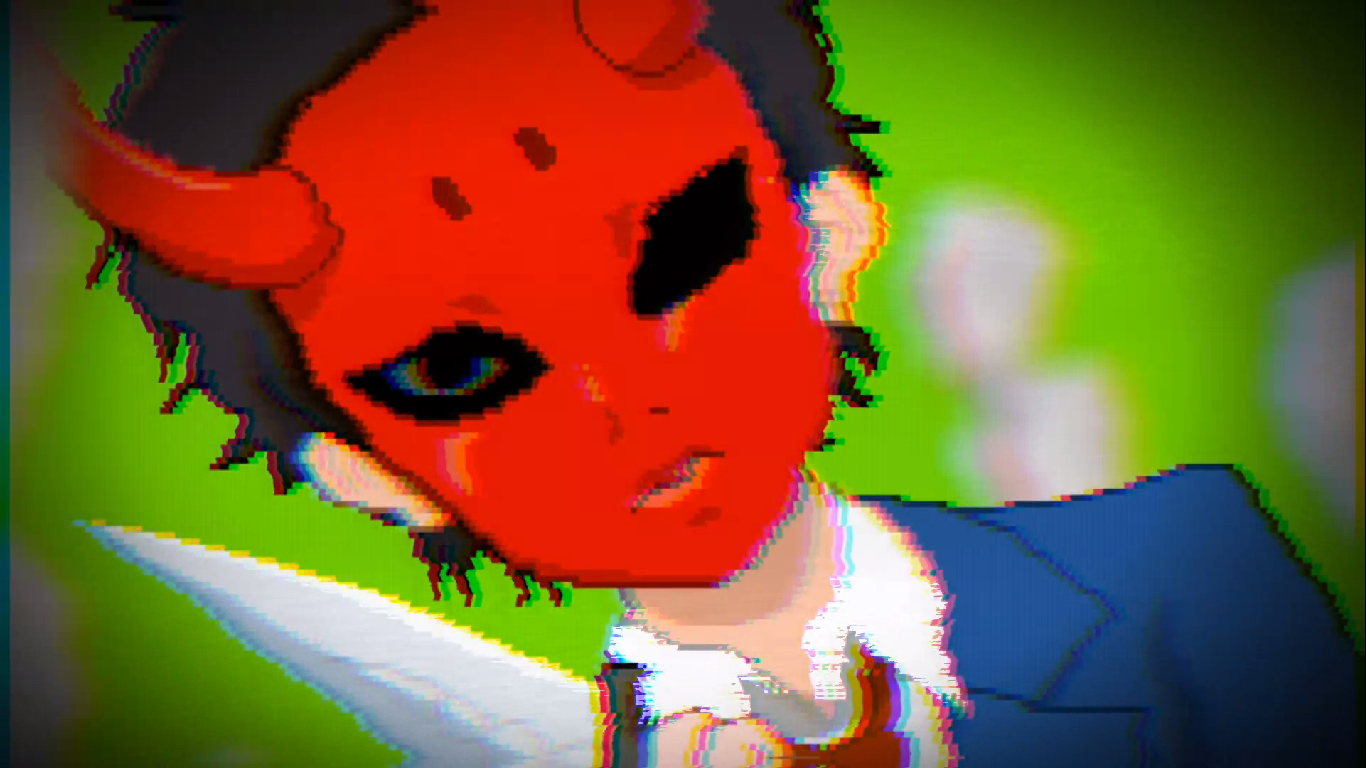 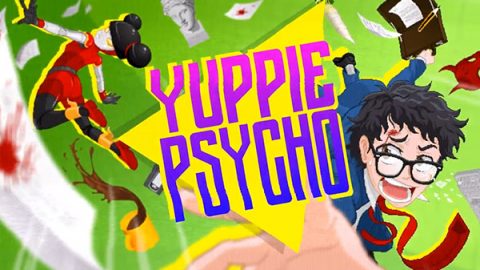 Baroque Decay’s The Count Lucanor from a few years back was an interesting little title. It blended lighthearted comedy and Silent Hill style horror with a dark fairy tale plot and lively sprite art to make one of the most distinctive survival horror games in recent memory. The team’s followup, Yuppie Psycho, takes the core elements of what made the last game work, refines them, and then slaps on a new coat of paint that transforms it into something truly original and refreshing. Fairy tales are done to death in games, so how about some office culture satire mixed in with that old twisted fairy tale logic? The end result is a game that manages to stick out from the pack through sheer originality and style alone. 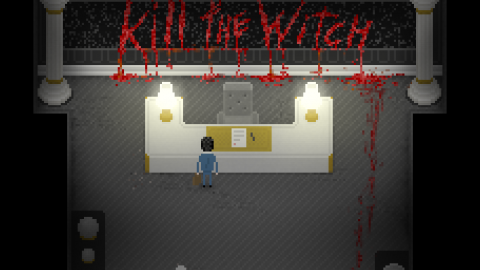 The focus this time is on Brian Pasternack, a kid from the suburbs in some sort of urban dystopia where people are divided into letter ranked classes. He’s low on the totem pole, but has been picked by the massive company Sintracorp for a job and possible class boost, even though he has no idea what his job is or why he was picked. That job turns out to be a very simple one: Witch hunter. Sintracorp has been effected by a mystical presence for decades now, one commonly called “the witch,” and Pasternack is charged with killing it to set things right. Things quickly get more complicated the longer Pasternack explores the building, finding friendly faces, wacky sights, and all sorts of body horror monstrosities, and it may only be a matter of time before the witch gets her claws into Pasternack himself.

Yuppie Psycho‘s story relies much more on abstraction than even Count Lucanor, constantly throwing new and strange things at you with little explanation for it. However, all the imagery does have symbolic meaning, or simply makes sense with the absurd logic Sintracorp now runs on. The parts where it’s blunt and obvious comes in the satire, with countless jokes, both in writing and portrayed mechanically, aimed at the business world and capitalist society at large. Sometimes it’s a light poking (especially in the motivational seminar you need to see for yourself), and sometimes there’s a deeper cut being made, especially when you find out about a major villain’s back story. Yuppie Psycho is a significantly darker character piece in many respects than Count Lucanor was, having a similar tone with more hard swerves for impact, but manages to have more to say at its core. The story structure also allows for more memorable moments, the party sequence sticking out as a brilliant bit of taking your guard off as it slowly builds tension. 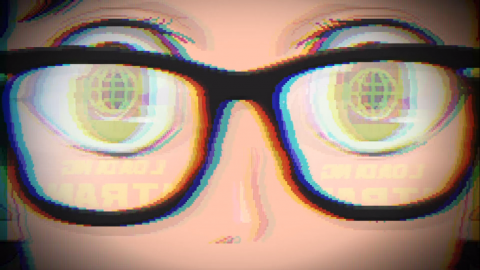 The base gameplay of exploring and stealth are also in play as before. You initially start out with some set-pieces and light puzzle solving, then slowly get introduced to stealth mechanics. As usual, the aim is to hide and make your move when you see an opening, but the game is thankfully much more light on these moments. The early game mine enemies are a good change of pace that are treated as problems you have to solve instead of simply avoid, and they require a precious pencil to deal with. This better introduces the shift towards managing limited items, and this resource management angle is further complicated with moments where you have to sacrifice very precious resources in order to get a potential upgrade or escape danger. It puts a satisfying sort of stress over the experience that ironically feels like work, but in a good way, making you feel accomplished for learning how to plan ahead and know when to use what.

Like before, saves are limited, this time represented by so called witch paper instead of coins. You use them with photocopiers to photocopy your soul, but several photocopiers you come across require you to spend an ink cartridge before you can use one as a save point. Both witch paper and ink cartridges also get other uses later on, the former to get extremely useful magical contracts, and the latter to survive encounters with a major enemy in the second third. The game still gives you opportunities to purchase more of both, but what you have to use to pay for them is also hard to come by, especially if you’ve been buying a lot from shops instead of focusing on hunting through each area. It’s a brilliant way to make the old resource managing Resident Evil formula feel fresh again, and it’s not too punishing since you can reload old saves when you had more resources. You have to redo a segment, but since you know how to do it more efficiently now, there’s a joy in knocking the task out with ease. 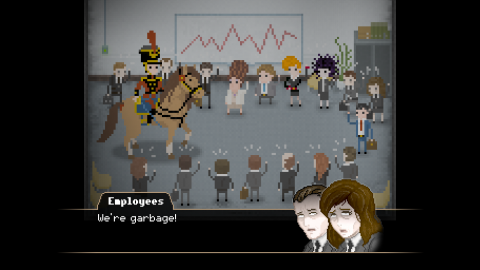 The game still rewards you for being curious too, revealing all sorts of secrets and very necessary resources hidden from plain sight, even giving you a better idea of the history of the company and the events going on around you. The change in structure to something more linear also prevents you from walking into bad endings so often, and makes finding all the endings a more enjoyable experience overall. You can really take your time and comb through everything, and your sharp eyes end up reaping surprising rewards, further pushed by a greater puzzle focus that never crosses too far into aggravating territory. The one occasionally annoying drawback is there are points in the story where it’s not entirely clear what your current goal is, and while they’re not often, they do kill the pace a bit.

A lot also has to be said for the presentation, as the switch from classic fantasy to modern surrealism and corporate trappings gives the game a varied and fresh feel. Exploring the ten floors of Sintracorp reveals a wide variety of sights, even working in a haunted forest on the eight floor to spice things up. It’s this small world of rotting, drab mediocrity, painted with blood smears and poison fumes, plus the odd corpse or suited worshiper begging for the company’s literal mouth to devour them and validate their hard work. There’s even an entire virtual reality area, complete with green grid walls and Greek sculptures and pillars, a clear vaporwave shout-out (the music in this area even has a friendly mall feel to it). The games final hours work in the strangest imagery of all, including an entire psychological horror segment that feels like Count Lucanor‘s best moments condensed and one-up’ed, leaving you in the dark over who to trust or even who’s real in the scenario. Compliments also need to be made to the sound designers, who cook up some really thick atmosphere in the more quiet areas, using the most simple of noises to get you on edge. No matter the tone the game goes for, the soundtrack and sound design nails it (as does the odd bit of voice acting here and there, though the game is mostly text). 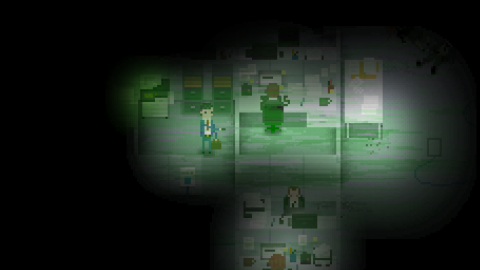 The biggest issue remains the simplistic sprite art used during gameplay itself. Some of the monsters do get some wild designs this go (wait until you see the spider boss), but basic character sprites leave a lot to be desired. Little animations do give them some life, though, and the environmental design is constantly great, every floor in the building with its own style that makes it stick out in your mind. The cutscenes no longer have to do the heavy lifting and are now icing on the cake, as they should have been in Count Lucanor.

Yuppie Psycho is a wonderful successor to The Count Lucanor, improving on its formula in just about every area. It also scratches a survival horror itch that more and more people have been getting as of late. If you wanna try something out of the ordinary in the genre, this is about as far out of the ordinary as you can get without going into the experimental stuff. It even works as a solid starting game if you wanna try getting into survival horror, not too stingy with resources and never putting you in a completely unfair spot. It’s a one of a kind game, but it builds itself on a strong and familiar foundation that makes it one of the better recent games in the survival horror world.