Taito apparently didn’t consider Demon Sword to be a true sequel, because here we are, over 20 years later, with The Legend of Kage 2 for the Nintendo DS. A lot has changed in the gaming landscape in the intervening years, but Kage 2 manages to update the same feeling of the original arcade game while removing all of the frustrating parts, as well as keeping with modern action sensibilities.

There are now two playable characters – Kage, and his female companion Chihiro. Kage looks a bit more masculine than his previous outings, with his chest exposed and presenting some impressive pectorals, but he’s still equipped with shurikens and a sword. Chihiro has a kusarigama that works just like a sword, but wields a huge chain rather than shurikens, and has more magic power. Playing as her is essentially the game’s hard mode. 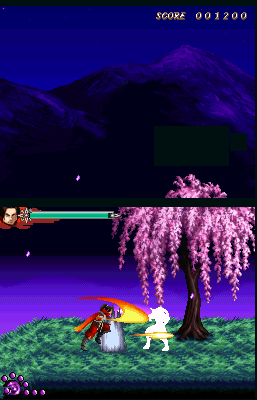 With the extra buttons on the DS, there’s now a separate button mapped to jump, which makes controlling the characters far less awkward. You can still leap great distances and toss shurikens quickly at any angle, but sword attacks are now far more useful. The sword swings are much more effective, with huge slashes similar to Strider, and you can execute powerful combos once you’ve progressed far enough.

By default, your characters move pretty quickly, but they can run even faster by double tapping forward. There are also a variety of other attacks, like a sliding maneuver, a mid-air dash, and a running slash, which can cut down multiple foes at once with your blade. You can also perform a variety of other cool ninja moves, like running straight up walls and hanging from ceilings. 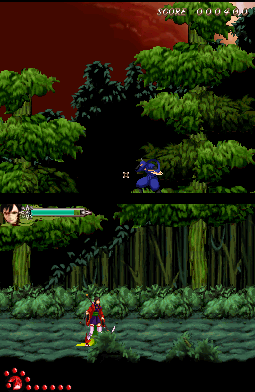 There are a number of magic spells, as well. At any time, you can charge up your sword attack and summon spirit shadows, which essentially triples your firepower temporarily. Additionally, you’ll find colored stones hidden throughout the levels – you can mix and match these stones to create a variety of magic spells (around 40 or so, which is impressive), but you can only keep a few equipped at a time. You’ll also come across items to extend your health or magic meters.

There are a total of 12 stages in The Legend of Kage 2, and each is structured similarly – gigantic, open expanses for you to leap and slash through, along with some occasional platforming elements. Both screens on the DS are utilized, and it suits the high-flying action pretty well, and the screen gap rarely becomes an issue. The speed is still lightning quick, but it’s also less chaotic than the original arcade game, and feels much less cheap. The fact that you can take several hits before dying also makes things much easier. The problem is, the game’s so loose that you can sprint through most stages while avoiding the majority of conflicts with enemies, at least on the normal setting. However, you’ll need to keep your eyes open to find some of the hidden stones, which gives you some incentive to explore. It’s still pretty easy though – when you die, you restart at a recent checkpoint with full health and magic.

The levels are repetitive and, for the most part, lack variation. The first half of the game consists of variations on forests and canyons. Even by the time you get to the final stages, which take place in the castle, the actual structure isn’t much different. Thankfully, the core mechanics are tight enough that it remains fun all the way through, but some more interesting level designs would’ve been nice. In spite of this, the game really shines during the boss battles, which provide a good sense of challenge without being frustrating. Most of these take place on huge playing fields that span both horizontally and vertically, giving them a nicely epic feel. 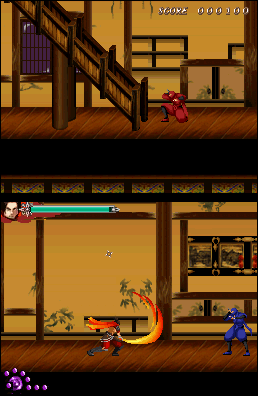 You can make it through all 10 stages with a single character in about two hours, but it’s a fun experience that doesn’t overstay its welcome. If you want more replay value, there’s a combo system that demands that you constantly kill enemies to build up high body counts, and the game records high scores. If you want to devote yourself to it, there’s a gallery of artwork, which reveals more pieces as you gain more points. There are also a number of story segments, mostly at the beginning and before boss fights, although they’re the usual cinematic video game fluff that’s easily skippable. In this version, Kage and the princess are childhood friends, but this doesn’t add much to the drama. The graphics are generally decent, but not particularly remarkable. There are a couple of decent songs, including a remix of the original The Legend of Kage theme, but most of the Japanese-inspired songs are pretty forgettable.

Even though it could’ve been tighter in places, The Legend of Kage 2 is still a fun game that takes the basic components of the original arcade game, refines them to remove any of its frustrations, and turns it into a quality title that any fans of side scrolling ninja action games are bound to enjoy.