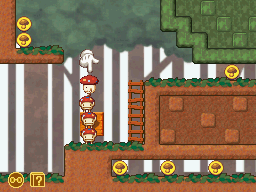 Any license can be made into a game if popular enough to justify one. Likewise subject matter with the right creativity and made by the right hands can attract those outside the fanbase. Docomodake certainly matches these qualities, even as a mascot for NTT Docomo, the largest mobile phone service provider in Japan. Since 2005 Docomodake merchandise started as cell phone straps but evolved to unspeakable amounts of items and even an art exhibit called (disturbing as it sounds) How to Cook Docomodake. This exhibit reached US shores in New York, the first real exposure overseas prior to the Nintendo DS title.

Docomodake is not a singular character but a whole family named after their relation. The story in this game is about Papa Docomodake looking to round everybody up for a festival. Cutscenes for each world follow a formula that tell how how a family member lost their way and endings send a heartwarming message about sticking together. “After all, you’re a family” is adorable and simple as an excuse plot. It may be intended to tell the audience that NTT Docomo is there for your family, but no product placement is to be seen. 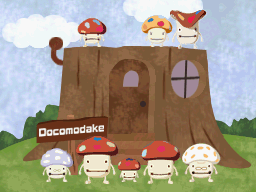 Papa Docomodake’s big talent involves spliting himself into mini copies to help navigate and problem-solve. He can stack them up into a ladder, roll them up and toss them, or drop them onto switches and urns. Controlling a mini requires dragging it around with the touch screen. First you have to pluck them out of Papa or press the shoulder buttons to pop minis out like popcorn. Circling around multiple minis with the touch screen will allow you to move more than one at a time. Tapping a mini triggers ball position for throwing. Papa himself is controlled, including jumping, with the d-pad (or face buttons as an alternative for lefty gamers). The control scheme is awkward, but it works.

Tossing it around or taking damage from enemies causes a mini to be exhausted. They become inactive with a countdown timer leading to fainting. Pick them up into Papa to save them in time. The exceptions are flying enemies who are capable of dragging minis off screen and spike traps (even dragging a mini into one). If Papa has no minis to absorb the damage inside him, he will die instead. If a mini faints, finding and ringing the Wake-up Bell (which looks like an angel) will revive your ghostly stock.

The heart of the level design is mechanisms, which are gimmicks and obstacles that Papa has to work around. There are no themed mechanisms, so everything is mixed in by late game. Common uses of block pushing and switches aside, most make more appropriate use of mini cooperation. In relation to weight, there are platforms that lower based on how many minis are present and crumbling floors on which only pint-sized Papa can walk or permanently be destroyed. Other interactions using the dragging and dropping of minis include block art, where you fill in box grids into a pattern, and hollowed stumps that warp minis that enter inside. 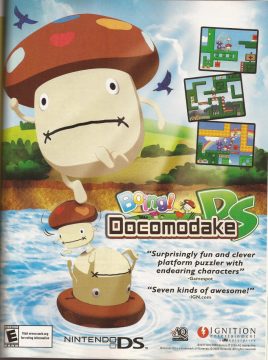 With the exception of the final world, the challenge is overall light. Replay value does revolve around getting a good stage and world grade which is measured by collecting and fast time. The gameplay mechanic of managing your minis comes at a price of being too generous. By end game you should have more than enough minis to overcome any obstacle even at the cost of letting a few faint. Papa will earn additional minis but fainted minis will not be penalized. There will be moments to restart should you mess up a puzzle.

The graphics are not flashy or detailed but the sprites are charming and backgrounds feature a storybook appeal which match the art found in the cutscenes. Some attention to quirky animations helps, like Papa spinning his cap when he jumps and when he tumbles into a wall a mini flies out. Top screen presentation features Papa someplace in the level theme usually looking around, hiding or floating in the river. The cute presentation is accompanied by bouncy melodies.

Ignition decided to localize the game for North America and Europe two years after its release. A curious act of localizing a licensed game like Docomodake that is obscure enough to be treated as a new series in the West begs the question of what value it brings to a new audience. Its gameplay can attract fans of the genre, especially the retro style. Character design is weird and rarely do you play as a mushroom. Its origins on the other hand are fairly inaccessible to appreciate. While Ignition’s quality in translation is hit and miss in various releases, this script was small and did not take any real hits. It was released with a budget price and an embossed slipcase, and is still reasonably valued to this day. 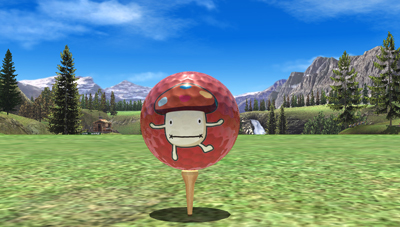 While Docomodake did not have another game after Boing! Docomodake DS, cameos elsewhere did rise. NTT Docomo collaborated with Sony for a Playstation Vita promotion offering DLC bonus items. It makes sense as NTT Docomo is the Vita’s 3G provider in Japan. The titles include Everybody’s Golf 6 (Hot Shots Golf: World invitational), Minna to Issho and Ridge Racer. Docomodake may be able to cameo in future Vita games. Who knows, a new adventure may develop on the handheld as well.