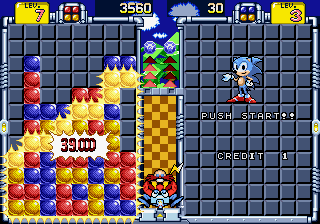 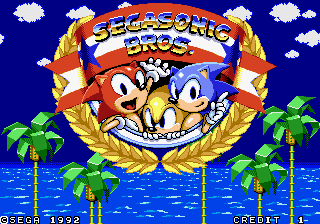 Sega found massive popularity with Sonic the Hedgehog, a cute-but-cool animal mascot that almost singlehandledly turned around the fate of the Genesis, at least in America. Recognizing its success, the company immediately began to capitalize on it, not only on developing console sequels (both Sonic the Hedgehog 2 and Sonic CD) but also in the form of spinoffs to bolster their arcade business. The console games were a success, but the arcade projects were… not. One was the oddball SegaSonic the Hedgehog, a multiplayer isometric action game featuring trackballs, which was mostly relegated to Japan with some extremely sparse international distribution. Another was SegaSonic Bros., a falling block puzzle game that was never officially released at all. It was considered lost until a MAME compatible ROM was released on the internet in 2018. 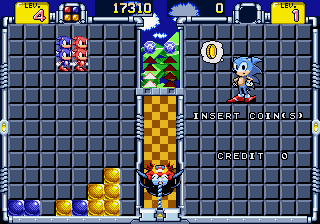 Sega was no stranger to these types of games in Japan – they’re the company that introduced Japan to Tetris with their arcade port in 1988, they also put out the successful arcade/Genesis game Columns (itself licensed from an American PC developer) and they published Compile’s Puyo Puyo in 1992. SegaSonic Bros. was designed Fukio “FTJ” Mitsuji, a former staff member of Taito who had created titles like Bubble Bobble and Syvalion before quitting and going freelance. Around this time, he also designed Tengen’s Magical Puzzle Popils, which was released on the Game Gear.

The “brothers” of the title are the red and yellow colored Sonics, in addition to the standard blue color – they don’t have any particular names, they’re just designed like that to accommodate the puzzle gameplay. The blocks consist of these Sonics, which drop four at a time in 2×2 block formations. At level 30, a fourth colored Sonic, white, is introduced.

The design itself is a little unusual, in that you’re not just directly matching colored objects. Instead, the goal is to connect same-colored gems to encase everything around them – once you’ve created a loop, both those gems and everything inside of them are eliminated. Both the bottom and the side boundaries are considered wildcards, so if you just surround them on one border, then the game will recognize it as a complete loop. Additionally, you don’t need to fill in the box completely – if you’re about to complete a loop, then one of the blocks will hang in mid-air to create the connection and remove everything. It is kind enough that the outline glows if you’re about to make a complete loop. As with many other arcade puzzle games, it features a two player competitive mode.

Every ten levels, you’ll also trigger the release of a Chaos Emerald. Wherever you drop this, everything above it will be immediately wiped out. If you’ve managed to keep the floor free, then this is an opportunity to clear out the entire screen, which will even grant double points. But all of your gems are stacked pretty high and it can’t reach very far down, then it won’t be all that useful. Therefore, keeping this in mind and keeping an opening towards the ground plays into the strategy. The speed will also drop down a bit every ten levels, though it doesn’t completely reset.

SegaSonic Bros. was never released because it failed the location tests, held in late 1992, and Sega deemed it unfit for wide release. And after playing the game for a round or two, it’s easy to see why. For starters, the rules are a little complicated and difficult to explain, even though the pictures in the game’s tutorial mode makes it seem easy. The game also increases levels, and therefore speed, very quickly, which doesn’t give you much time to learn the game before becoming overwhelmed. One of the other issues is that the 2×2 blocks make it difficult to create straight lines – most of the time you’ll have two of the same color next to each other, so you’ll need to prioritize that color when building towards a loop. Standalone colors are useful for finishing loops, but otherwise will just become blocked with the color next to it. 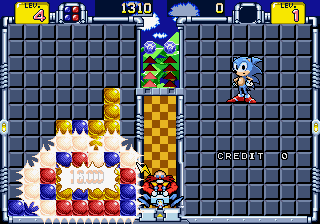 Also, due to the nature of the game, it’s very possible to create a gigantic loop by accident. It’s great to luck into something that will eliminate huge chunks of the screen and allow you to keep playing, especially if the screen has become too cluttered, but it rarely feels satisfying when you just blunder into success.

The visuals are also cluttered, a big problem when clarity is key between victory and defeat. The blocks are represented as little colored Sonics –  which crouch into balls when you rotate them, and enter a falling animation when you speed drop them (the same animation when Sonic gets hit in the Genesis game). When they fall into place, then they transform into gems. The main issue is that each Sonic is technically two blocks high in spite of technically only inhabiting one block of space, and the constantly changing animations make it visually difficult to keep track of.

Visually, the game isn’t ugly, but it does look a little cheap. The game runs on the Sega System C2, which is basically a slightly enhanced Mega Drive, but it’s a downgrade to compared to other Genesis titles. Compare the title screen to the 16-bit console version of Sonic the Hedgehog, and despite sharing a similar design, it looks worse. The background visuals are based on levels from the Genesis game, but are barely visible. Dr. Robotnik/Eggman inhabits the middle of the screen and comically electrocutes himself every time you make a match, which is an amusing touch. 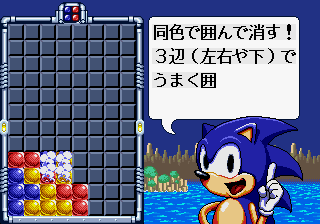 Some elements, like the quickly increasing speed and the visuals, could’ve been touched up before final release, but there are just fundamental issues with the design that makes SegaSonic Bros. difficult to play, regardless of any tweaks. After playing several credits, then the game becomes easier to understand, and then it becomes pretty fun, but that’s a bit much to ask for puzzle game, considering their appeal tends to lie in how immediately understandable their rules are – it’s the reason why Tetris is considered one of the most popular video games in existence. It’s not like other falling block puzzle games didn’t try anything similar, though – Jaleco’s Soldam (1992, later ported to the Switch in 2017) and Taito’s Cleopatra Fortune (1996) both use similar “entombing” concepts, though they’re better implemented there.

There are some interesting facts in regards to the music. The main theme was rearranged and used in the Mega CD version of Teddy Boy Blues, included on the Sing! Sega Game Music Presented by BB Queens soundtrack album, which includes some other interesting vocal arrangements of assorted Sega games. One of the later tracks, that plays when you reach level 40, was re-used for the Blue Sphere bonus game in Sonic the Hedgehog 3.

Incidentally, there was another, later Sonic The Hedgehog falling block puzzle game spinoff – Dr. Robotnik’s Mean Bean Machine, released in 1993 for the Genesis, Game Gear and Master System, though this was just a reskinned version of Puyo Puyo created for Western markets, featuring characters from the Sonic the Hedgehog cartoon (though not Sonic himself, weirdly enough).