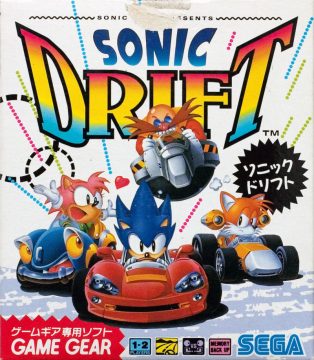 With the release of Team Sonic Racing in 2019, it’s a fitting time to look back at Sonic the Hedgehog‘s very first racing stint. Sonic Drift was a duo of games that, while undoubtedly inspired by the success of Super Mario Kart, don’t attempt to directly emulate it. Instead, they go for a Sonic-themed take on “Super Scaler”-styled racing games (think Super Monaco GP or OutRun).

Developed in-house at SEGA, the first Sonic Drift was never released outside of Japan until it appeared in Sonic Adventure DX years later, and that’s likely because there isn’t a lot on offer. It’s a very functional, but overall lacking racer that might hold some interest to fans of the genre.

The plot is practically non-existent, with the manual only setting up the fact that Sonic, Tails, Amy Rose from Sonic CD (making this her first playable appearance), and Dr Eggman are taking part in a Grand Prix.

Sonic Drift is a kart racer that models itself after the gameplay of “Super Scaler”-type racing games, which uses sprites to create a psuedo-3D environment where you drive into the screen. You have four characters at your disposal: Sonic, the fastest racer, but the worst in terms of handling; Tails, who handles well but is a little bit slower; Amy, sitting in the middle in terms of speed and handling; and Dr Eggman, who has very good handling but takes ages to pick up speed.

Each character has a specific power-up that can be activated by pressing Up on the D-Pad after collecting two rings, which occasionally dot the race track. Sonic gets a speed boost, Tails can spring over racers and tight corners, Amy can slow everyone else down, and Eggman drops a mine behind him. The first two can also be found within the stage as usable items, alongside an invincibility monitor.

As the name of the game implies, there’s a big focus on drifting. When you approach a corner or turn, you can drift through it with a combination of the acceleration/brake buttons and turning into the curve of the corner (think of the drifting mechanic in the Sonic & SEGA All-Stars Racing games). Be careful not to drift too much, or you’ll spin out. But don’t understeer and go off the track, because you’ll either slow down in the dirt or end up crashing into a bit of scenery.

The focus on drifting is emphasized in the track designs, which offer variety by creating different mixes of sharp turns, winding roads and straight lines. This creates a fast game where you’re going at great speeds while just barely making tight enough turns to avoid spinning out, which can be quite thrilling at times.

This also means that no character has a particular advantage based on their stats, since some levels suit certain racers more than others (e.g. Sonic is suited to long stretches, while Tails works best with a winding track). However, not every character works out well. Amy’s drifting can be over-sensitive to the point of being really easy to spin out, and Eggman is often too slow to keep up with the other racers unless the track suits his playstyle.

You have three modes on offer: a “Versus” mode where you play against friends, a “Free Run” mode to race in any of the tracks by yourself, and “Chaos GP”. The latter has you racing in one of three cups, each containing six tracks, and the goal is to earn the most points (usually by coming in first place as often as you can).

Despite there being 18 tracks, each track in the cup is based on a zone from the original Sonic the Hedgehog: Green Hill, Marble Zone, Spring Yard, Labyrinth, Star Light, and Scrap Brain. For example, there’s three Green Hill tracks, but only one is used in each cup, and the same goes for Marble Zone, and so on.

This also highlights a problem with the game’s focus on drifting. The themes of the zones have no influence on the track designs. No environmental hazards, bottomless pits, or the like appear to change things up. While this allows for the races to be pure tests of skill without worrying about hazards, it also means that the tracks can feel repetitive after a while since they only differ in the frequency of turns and straight lines.

The game itself is fairly short. With each track taking three quick laps to beat, it’s pretty easy to clear through all three cups within half an hour. There aren’t any unlockables, but there is a harder difficulty, and winning all three cups in one go will give you an adorable ending cutscene for your character.

Sonic Drift is definitely one of those games where you keep playing, not for the sake of unlocking more content, but just because the gameplay itself is solid enough. It’s decently designed, with responsive controls and a feeling of speed that’s often pretty exciting. It’s difficult to comment on the AI, since the horizon is too small and everything’s moving too quickly to really notice other racers for more than a second.

The onscreen space is the most controversial element of the game, with the top half of the screen being used to display the map while the bottom half is for the actual gameplay. This can seem harsh at first, especially when viewed on the Game Gear’s small screen, but it’s something that can be gotten used to, with a seamless rhythm of looking back and forth between the map and the game to anticipate corners.

On the subject of visuals, the graphics are quite nice. The characters are big and bright, the colors are cleverly used to make the racers, track, and backgrounds easy to tell apart, and a fast and smooth framerate ensures the game remains playable. The background even rotates smoothly to keep up with the track’s turns (something that wasn’t done in every handheld “Super Scaler” racer, usually due to limitations).

However, the music is only mediocre. The tunes composed by Masayuki Nagao are competent, but they feel too slow for how fast things can get and lack the energy needed to really make them feel intense. Like a couple of other 8-bit Sonic games, one of the tracks (this time the invincibility theme) is based on the Japanese theme of Sonic CD: “Sonic – You Can Do Anything”.

Sonic Drift is a decent enough racer, but the lack of variety in track design (both visually and thematically) and the small amount of content mean that it’s a racer only a small number of people will dedicate themselves to.