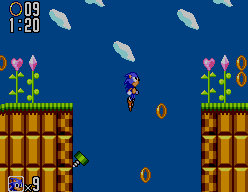 With the first Sonic the Hedgehog being so successful, it’s not too surprising that an 8-bit port ended up being made for its sequel. Sonic the Hedgehog 2 was released for the Master System and Game Gear about a month before the Mega Drive version, meaning that this was the first appearance of fan favorite Miles “Tails” Prower.

Unlike the first game, this was not made by Ancient, but instead Aspect Co. Ltd: a handheld developer who would make every other Sonic platformer for these systems. The shift in developers goes some way to explaining why Sonic 2 makes a few deviations from its predecessor, particularly in trying to make it more like the Mega Drive games. However, most of these changes result in a decent, but decidedly inferior sequel. 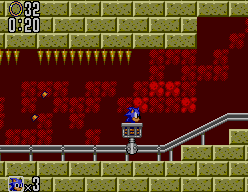 Despite sharing the name of its Mega Drive counterpart, this version of Sonic 2 has a completely new plot: Tails has been kidnapped by Dr Robotnik and is being held to ransom. It’s up to Sonic to get his best bud back, and to collect the six Chaos Emeralds along the way (the 8-bit Sonic games mostly stuck with six Chaos Emeralds, instead of the standard seven). This game is well known for having two endings, which hinge on Sonic collecting the Emeralds. If he gets them all, he rescues Tails. But if he doesn’t, Tails isn’t saved, and his fate is left ambiguous.

Sonic 2 retains the same style of gameplay seen in its predecessor, with a few tweaks and changes made to the formula. You still have to find the Chaos Emeralds within the levels (though you only need to find five this time), but the Special Stages are gone. The shield and checkpoint item boxes are gone too, leaving you with less options and forced to beat the levels in one go.

Sonic also controls a bit differently, having a slower run-up and maintaining a lot of momentum when you try to stop. In fact, he slides a considerable distance along the ground after a jump, which makes it very easy to accidentally careen off the edges of platforms. 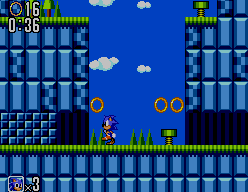 The stages are completely original this time, with none of the 16-bit levels making it over. You start off in the mines in the Underground Zone, before heading to the stormy heights of Sky High Zone, followed by the underwater labyrinth of Aqua Lake Zone, Green Hills Zone’s rolling meadows, the mechanized Gimmick Mountain Zone, and the tube-infested maze that is Scrambled Egg Zone. If you have all five Chaos Emeralds when you beat Scrambled Egg, you’ll get the sixth emerald and can access the final zone – the abstract Crystal Egg Zone.

The level designs seek to emulate the Mega Drive games a bit more closely, at least when it comes to visual set-pieces. Pipes similar to those in Chemical Plant Zone can be found in Aqua Park and Scrambled Egg, the spinning wheels in Gimmick Mountain recall those from Scrap Brain Zone in Sonic 1, and there’s even a couple of (very obviously scripted) loop-de-loops.

However, this doesn’t mean that the level design is improved from the first game; for the most part, it’s gotten worse. For starters, there’s a tendency to surprise the player with sudden enemies or hazards. While this is a trait typical of 2D Sonics, and usually done with the intent of making you memorize things for your next run, the way it’s executed here frequently feels too unfair and it crosses the line from cheeky to irritating.

New gimmicks have been introduced to keep things varied, but the results are pretty uneven. While some are cleverly designed and used in interesting ways (e.g. the pipe tunnels in Scrambled Egg, the mine cart rides in Underground), others control very poorly and are plagued by mandatory, obnoxious puzzles (the floating bubbles in Aqua Park, the hang-gliders in Sky High). The lack of checkpoints exacerbates this problem, forcing you to repeat the entire level if you die at any point. With levels like the second acts of Aqua Park and Scrambled Egg being so frustrating already, this can make them insufferable. 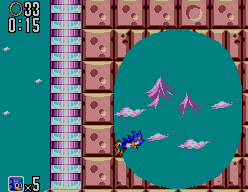 On a more subtle note, the sense of flow and progression seen in the first game is pretty much gone. Levels don’t introduce ideas, develop on them, and come to a satisfying conclusion. More often than not, they just go on for a bit before suddenly stopping, and it makes beating them less satisfying.

The worst case of this is in the final zone, Crystal Egg: an anti-climactic trio of stages that don’t offer up much in the way of challenge or interesting obstacles. While the game was in development for at least ten months (going by the date code of an AutoDemo sent to magazines for previews), it seems like there wasn’t enough time to refine this zone into anything substantial for the finale.

It’s such a shame that the level design is so lackluster, when the core gameplay is still good. While the sliding takes time to get used to, the controls are responsive and the game overall plays quite well. There are occasionally some really clever puzzles and platforming sections that can provide some challenging gameplay, along with a bit of spectacle.

There are even a couple of improvements made. Now you lose five rings instead of one when you get hit, and you’re able to collect them this time, which makes the game more forgiving. The levels are filled with extra paths to take, which encourages you to explore, try alternate routes if the current one is too frustrating, and replay the game to see how else you can get through a stage. 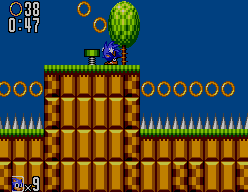 The bosses are about as good as they were before, still challenging you to understand how Sonic plays in order to dodge their attacks and get in a good hit. However, you still have no rings to help you out, and when you have to get through difficult obstacle courses to reach them this time, it makes dying all the more frustrating.

At its core, Sonic 2 is a fairly enjoyable game, and it’s admirable how it tries to more closely emulate its 16-bit counterpart in terms of visuals and spectacle. But there’s a lot of problems that drag it way down, and the end result is a much weaker game than its predecessor.

It doesn’t even have the strong presentation you’d usually see in a Sonic game. The graphics are decent, with a fairly smooth framerate and a variety of level graphics (some of which even change in the second act to change the mood), but it suffers from a messy art direction. The backgrounds don’t have the beautiful minimalism seen in the previous game, and there’s often objects in the foreground that make it hard to see enemies or item boxes.

The soundtrack, this time done by mainstay SEGA composers Masafumi Ogata, Naofumi Hataya and Tomonori Sawada, consists entirely of original music. While the tunes are competently written and help to give the levels a certain feel, none of them really stand out. The only thing worth noting is that the theme for Green Hills Zone was reused to create the Japanese theme for Sonic CD, “Sonic – You Can Do Anything”.

The Game Gear port is the version most people will be familiar with, due to the Master System version only being released in Europe, Australia and Brazil, and has a reputation for being one of the hardest Sonic games ever made. This mostly comes from the game not being redesigned to accommodate for the reduced screen resolution, which means that a lot of the enemies and hazards are even harder to anticipate.

Some of the bosses have been given a slight redesign in terms of layout or mechanics, with the most infamous change being to the game’s first boss, where the explosive balls now bounce in a randomized pattern. Combined with how little room you have to anticipate and dodge them, this makes for one of the most difficult bosses in the series.

A couple of new music tracks have been added, such as a brand new boss battle theme and a good ending theme that was actually featured in the Master System game’s ROM. Thanks to having more room to see, the Master System version is the best one to play.

Like a few other Sonic games on the Master System and Game Gear, Sonic 2 would eventually be adapted into the world of Archie’s Sonic the Hedgehog comics. In the “Champions” arc (issues #268-271), the game’s events were retold in a flashback which combined elements from the Adventures of Sonic the Hedgehog cartoon, such as the character Breezie the Hedgehog and the Super Sonic Search and Smash Squad. 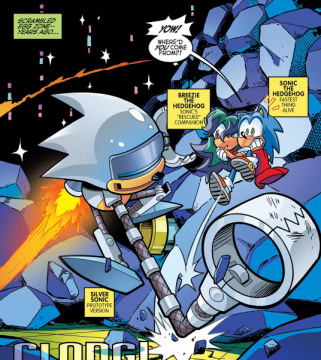 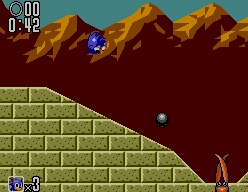