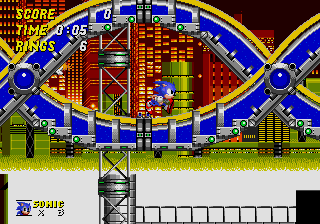 Sonic the Hedgehog was an extraordinary success, and gave Sega and the Genesis the muscle it needed to stand up to Nintendo, particularly in North America and Europe. As such, Sonic the Hedgehog 2 was planned to come out in time for the holiday season the following year. The game was developed by Sega Technical Institute, a newly formed team in San Francisco, helmed by longtime designer Mark Cerny, who had previously created the arcade game Marble Madness. Though some of the staff was America, there were many members from the original Japanese Sonic Team who relocated to the USA to work on this game, including Yuji Naka (who had previously just quit Sega due to clashes with management but was rehired back in this new department) and level designer Hirokazu Yasuhara. The American designers had previously worked on Kid Chameleon.

The premise here is that Dr. Robotnik has created a gigantic space station called the Death Egg, and it’s up to Sonic to run through West Side Island to stop him. He’s joined by a new character, Miles “Tails” Prower, a two-tailed fox who’s sort of like Sonic’s adopted little brother. During gameplay, Tails mostly shadows Sonic’s movements, and can also grab extra things like rings or inflict extra damage on enemies. Though he can get hurt, he doesn’t lose any rings when hit (though there are exceptions), and even when he falls off the screen, he automatically flies back to Sonic’s side. If a second controller is hooked up, it can be used to guide Tails, effectively giving the game a two-player mode. The camera still follows Sonic, so it’s easy for Tails to get left behind (and eventually get automatically guided back to Sonic) but it’s a good role for a younger player. A new move called the spin dash has been added, which lets Sonic rev up in place and then quickly zoom off, making it easier to get over certain obstacles. Though finding areas to run and build up speed was one of the main elements of the original game, it ultimately didn’t add much, and using the spin dash is just much quicker and easier. 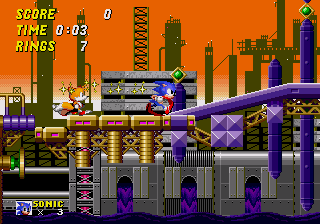 The visual design has been given a makeover, with an even bright color palette and a new sprite set for Sonic, along with other elements like new title cards. The soundtrack has once again been provided by Masato Nakamura, with a large number of fun and diverse songs, and even used the Dreams Come True song “Sweet Dreams” as a basis for its ending theme.

The levels have been restructured to offer two Acts rather than three (for the most part), though the number of total Zones has increased to eleven, and it’s slightly longer than the original (20 stages versus 18). The game begins in the sunny Emerald Hill Zone, thematically similar to Green Hill from the original. Chemical Plant is a factory, filled with blue liquid (which, despite its toxic color, actually just acts like regular water), while Aquatic Ruins is a flooded area with Grecian-like columns, and arrow-spewing totem poles. Casino Night looks like a Vegas-landscape, and expands on the ideas of Spring Yard Zone by filling it with pinball flippers and plungers, along with jackpot slots Sonic can jump into for extra points. Hill Top takes place with foggy mountains in the background, with many areas filled with lava, while Mystic Cave is a…well, a cave, filled with spikes and vines. Oil Ocean is a sludge factory, complete with slides filled with the gooey substance, while Metropolis is a gigantic clock tower. The rest of the zones are shorter: Sky Chase, where you control Sonic on top of an airplane, which is piloted by Tales; Wing Fortress, where you run around a battleship flying in the sky; and Death Egg, where the final encounter takes place.

Compared to the somewhat inconsistent level designs of the first game, the developers had finally gotten a good idea of how to create Sonic stages that fit the tempo of the game. A few new types of terrain have been added too, include a corkscrew, seen in Emerald Hill Zone. However, there are still some areas that throw off the difficulty curve a little bit, or at least throw you into situations where you can be killed very quickly if you don’t know what you’re doing. For example, a section in Chemical Plant Act 2, where the level becomes flooded with liquid and you need to jump quickly up a series of blocks, which can also crush you, if you’re not careful. Plus, some levels drag on, like the Metropolis Zone, which consists of three Acts rather than two. Like the first game, the final encounter, where you fight Robotnik is a huge mecha, is comparatively difficult since you’re not given any rings, at least in the original Genesis version. (Later versions, like in Sonic Jam for the Saturn, give you some at the start so you can at least take some damage.) 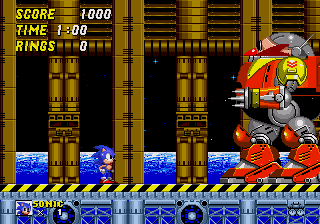 The special stages are now activated when hitting a checkpoint pole when you have more than fifty rings. This are displayed from a behind-the-back perspective, as Sonic and Tails run through 3D rendered tunnels to collect enough rings to reach the end. These aren’t exactly true 3D – they’re actually prerendered, at a very low resolution and low frame rate, but at the time, it looked pretty cool. But they’re also incredibly difficult, because you need to know almost exactly where every ring (and every obstacles) is located. It doesn’t help that Tails, if being guided by the computer, is actually a hindrance – while he can be used to grab extra rings since he moves a split second behind Sonic, he’s actually vulnerable to damage, unlike the main game, so he can easily loses rings for you if you don’t guide him carefully. Getting all of the Chaos Emeralds not only triggers the true ending, but once you get 50 rings, it also lets you turn into Super Sonic, a superpowered golden form most likely inspired by the Dragon Ball Z Super Saiyan form, that’s even faster than his regular, and is basically invincible. Once activated, it chews up rings, though, so you can’t stay in this form forever.

In addition to being able to control Tails, there’s also a split screen two player mode, which features a rarely-used high resolution mode in the Genesis which basically compresses an entire screen into halves. Only three zones are playable in this mode – Emerald Hill, Casino Night, and Mystic Cave – so it’s more meant for competitive play. In addition to looking weird, there’s also tons and tons of slowdown. This mode also features two unique monitors – one that features Robotnik’s face (present in the original game but unused) which will steal your rings, and another that swaps the places of the two players. It’s cool from a technical perspective, and it made a new marketing bulletpoint, but it’s not really that much fun to play.

Overall, Sonic the Hedgehog 2 is everything a sequel needed to be – refined, bigger, and with more features, topping the original in almost every way. The only feature is truly missing is a save game function, though this is remedied in later ports. 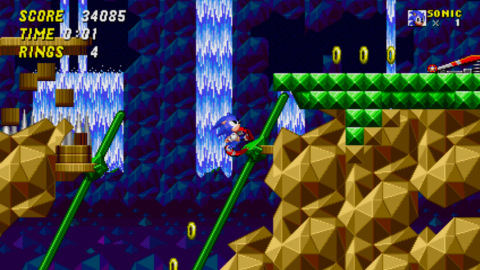 Sonic the Hedgehog 2 was heavily hyped up during production, with many articles in video game magazines, but studious gamers noticed some screenshots of areas that weren’t included in the final game. The most prominent is a level that was called Hidden Palace Zone, another cave-like level with a purple background. Several years after the game was released, a ROM was released that contained playable portions of this level. According to Yuji Naka, this was meant to be a stage accessible once you obtained all of the Chaos Emeralds, in order to get the Super Sonic power, but it was cut near the end of development. A similar concept was carried forward in Sonic & Knuckles, though it’s a completely different stage.

A few other areas were hinted at, including a desert level called Dust Hill Zone, a forest level called Wood Zone, and the scary sounding Genocide City Zone. The latter was actually the result of a non-native English speaker unware of the harsh connotation of the word “genocide”, and was later renamed to Cyber City Zone before getting scrapped. The level layout was basically completed, though, so the graphic set was altered to turn it into the third act of Metropolis Zone. Some of the background tiles were re-used later for The Machine level in Sonic Spinball. Unlike Hidden Palace, none of these zones were ever really playable in any leaked beta.

Sonic 2’s story originally revolved around time travel, so some of the Zones were meant to be the same area of the island, just in different time periods. For example, Emerald Hill (called Green Hill in original documents) was supposed to be the “present” version, while Dust Hill was the ruined present and Hill Top was the past variation, and the Chemical Plant was the future version. This concept was used in a different manner for Sonic CD – in that game, you can teleport back and forth between four different variations of the same stage, while in the concept for Sonic 2, it seemed like the levels were still presented in a linear fashion, so the time travel was just an element of the story. The relationship between these is completely coincidental though.

Most of the ports of Sonic 2 were just emulations or slightly tweaked variations of the Genesis game, with the only true remake being released on mobile platforms in 2014. Much like the similar ports of Sonic the Hedgehog and Sonic CD, these were created by Christian “Taxman” Whitehead, and includes niceties such as true widescreen, a save game function, the ability to play as Tails using his flight capabilities from Sonic 3, and others.

But the absolute coolest addition is that the Hidden Palace Zone has been reinstated into the game. Rather than visiting it when obtaining the Chaos Emeralds, as originally planned, it’s instead hidden in the Mystic Cave Zone. There was one pit that was curiously cruel, where it seemed to lead somewhere but just dropped you to your death. (It was so sloppy that the version in Sonic Jam actually made it escapable.) In the mobile version, if you fall down this pit, instead you’ll end up in Hidden Palace Zone. It’s not quite the same one as featured in the beta ROM, but it uses the same visuals. It also uses a different music theme . Also new is an extra boss, Robotnik featuring a musical instrument. Using a cheat code, it’s possible to visit the version found in the beta ROM, which has been completed and is now fully playable. 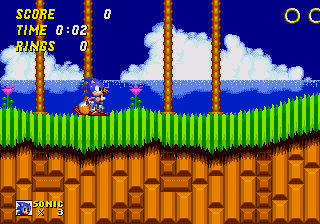 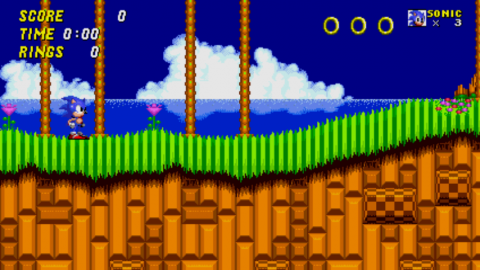 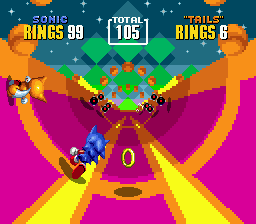 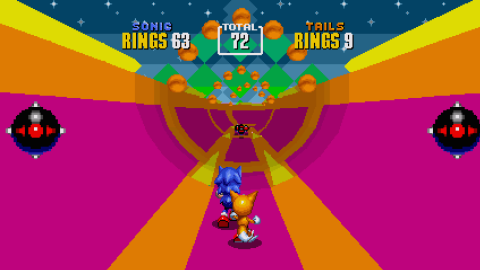