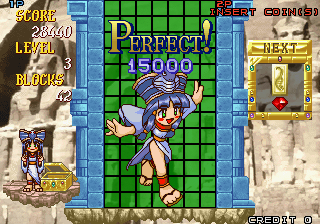 One genre that Taito is somewhat well-remembered for beyond their platformers and shooter games is definitely puzzle games. Whether it be experimental takes on the genre like Puchi Carat or more standard, yet highly popular titles like the Puzzle Bobble series, Taito has produced a wide palette of puzzle games, and especially so in the 90’s, where a lot of these appeared on their bespoke Taito F3 “Cybercore” arcade system. However, a lot of them didn’t go as noticed as the Puzzle Bobble games, being relegated to a quiet appearance on a lot of the Taito arcade compilations years later, where they only then finally got noticed by people outside Japan. Cleopatra Fortune is definitely one such example, even if it wasn’t hit with obscurity as hard as some of Taito’s other puzzle games. 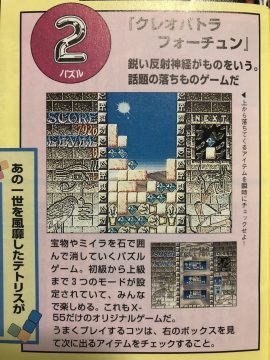 Originally developed by Taito as a downloadable minigame for their own X-55 karaoke machine (said machine is even advertised in the arcade version’s attract mode), and later given an arcade version (in conjunction with Natsume) in 1996, Cleopatra Fortune is a block-breaking puzzle game with an Egyptian theme, in which the goal is to clear as many lines as possible. To clear the lines, the player has to “entomb” whatever items they get in the stone blocks they fall down. The items that the player has to deal with consist of gems, sarcophagus coffins, and mummies. All of this happens while an anime version of the historical figure Cleopatra named Patrako (or Patoraco, the exact translation of the name is debated among fans of the game) cheers the player on. Clear the all the lines in the playfield in one fell swoop, and the player gets a Perfect score bonus, along with a random picture of Patrako, who later on shows to have a love for cosplaying.

Even for a simplistic puzzle game, Cleopatra Fortune is great in terms of presentation, with well-made graphics, and the highlight of it all is Patrako herself, who is smoothly animated, and even changes her mood depending on how the player is doing. The audio is also great, with Patrako having a fair amount of voice samples, and the OST, composed by Shuichiro Nakazawa of ZUNTATA, fitting the whole Egyptian theme nicely. The main theme, Shinin’ Queen, will be sure to be stuck in the player’s head for quite a while.

Admittedly, there’s not much to the game, but considering it’s a puzzle game, that’s not really a bad thing. It checks all of the boxes to be a good block breaking game, and adds some more to be totally worth it, while being fairly accessible at the same time. However, to fully master the game takes a fair amount of skill. If the player has a lot of blocks in their playfield, and is rather close to ending the game, it can be rather hard to recover from it, leading to an early game over if they’re not skilled enough. Also, the multiplayer mode isn’t really that fleshed out as other puzzle games like Tetris or Puyo Puyo, which is really a crime for a puzzle game. Finally, while good for beginner players, the lack of a counter-clockwise spin button can probably drive some hardcore puzzle fans insane. Despite the flaws, Cleopatra Fortune is recommended playing for any puzzle game fan, with it being easy to learn, but hard to master.

To date, most of the home ports of the game are Japanese-exclusive, and wildly vary between each version. The first to appear (and probably the best way to play the game) was the Sega Saturn version, released in 1997, and ported and published by Taito/Natsume. Other than the sound samples being reduced in quality, it’s as arcade-accurate as one can get. The main difference from the arcade version, however, is the inclusion of a quest mode, which involves the player having to clear a lot of preset fields in specific ways. It’s a nice addition to an admittedly slim package, even if it gets really hard at certain points.

The next version of the game is the PlayStation version, which was the first of two versions to get an overseas release. It was ported and published by Altron in Japan in 2001, published in Europe by Midas in 2001, and published in America by Mud Duck Productions (a former budget label of Zenimax) in 2003. While still retaining the gameplay of the arcade version, and having the quest mode of the Saturn version, it feels very different overall. The graphics and music have been definitely pared back in this version, feeling like a cheap knockoff of the original game. The framerate is also horrendous, and while it doesn’t ruin the experience, it’s still rather nauseating. It adds a counter-clockwise spin button, which while helpful, plus an added time attack mode, but it’s not quite enough to save this version.

One of the last console ports of the game is the Sega Dreamcast version, ported and published by Altron in 2001. While otherwise based on the PlayStation version, it’s better in almost every way, with higher resolution visuals and newly arranged music, and a perfect framerate. It also adds in some extra outfits for Patrako. While it being a direct port of the arcade version like the Saturn version would have been preferred, it’s still an adequate port.

The game was ported not once, not twice, but technically thrice to mobile phones via the I-mode and Ezweb phone services. The first two are more direct ports of the game, first released in 2002, then in 2005. The third port, released around 2006, Ys Fortune, is a bit weirder, as it’s based on the Ys series of roleplaying games. It seems to be the same exact game, except Isha from Ys VI cheers the player on, and some of the items that the player has to deal with being changed to be more Ys-themed. Due to all of them being exclusive to Japan, there is no known way to play these versions currently. Incidentally, since the original X-55 version was download only, and the servers have long been turned off, this version has also been lost to the ages. 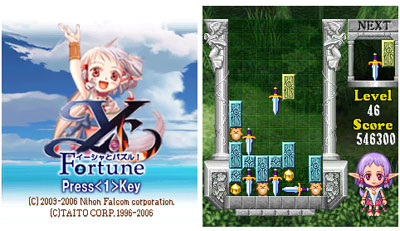 Lastly, the arcade version is featured via emulation on the Taito Memories Joukan and Taito Legends 2 collections, and is also the second port to get an overseas release. Aside from some blurriness of the graphics, and the usual oddities that came with emulated game collections of the time, this is a great version of the game. There’s not much to say about it, other than the fact that on the PC version of Taito Legends 2, when playing using a keyboard, the Up direction is broken, rendering Easy mode impossible to play. However, this is fixed by using a controller with the game. 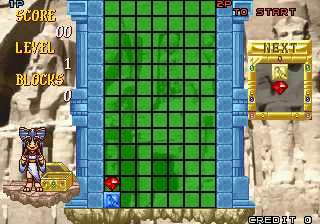 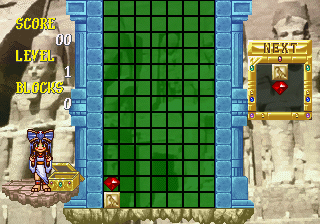 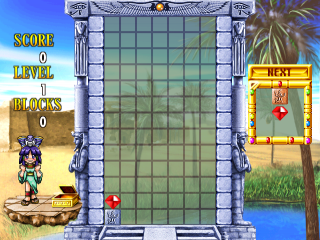 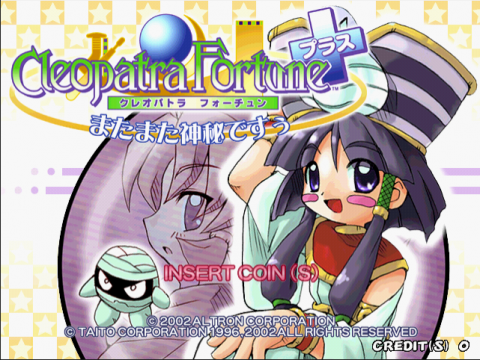 Long after Natsume ended their business relationship with Taito, Taito took it upon themselves to recreate the successes they had with Natsume, taking their IPs to other developers to see what they could do with them. A developer that worked with Taito often around this time was Altron, a company best known overseas for making handheld games based on licensed properties. While a lot of the Taito-licensed output from Altron was mostly ports and some sequels, their output is interesting nevertheless. To add onto this, while most of the games from this Taito/Altron partnership stayed on console, one of them got an arcade release, and that game is Cleopatra Fortune Plus, a sequel of sorts to Cleopatra Fortune, a prior game that Taito produced in partnership with Natsume.

Developed by Taito and Altron, and published by Taito in 2002 for Sega NAOMI-based arcade cabinets, Cleopatra Fortune Plus doesn’t do a whole lot different from its predecessor. The stuff it does add, however, are nice additions to the basic-yet-fun gameplay of the first game. For starters, it adds some new block types for the player to deal with, like bigger stone blocks, items that clear certain objects like gems and mummies, new block formations, different-colored gems, new gems in general etc. One of the biggest additions for solo play is that it adds a story mode of sorts involving some rivalry between Patrako, and a new girl named Zenobia. Not only that, it fleshes out the multiplayer mode quite a bit, which is now somewhat more exciting thanks to the new block types, plus some new modes and tweaks to make multiplayer action more worth it. This was something that the original game needed, as the multiplayer mode in there was rather lacking.

Like with the original game, the presentation here is fantastic. The anime-like artstyle fits the game’s graphics quite well. Somewhat due to this, it also presents quite a bit of attention to detail, like the mummy on the top left chiseling away at the next block to be put in the playfield, and Zenobia giggling whenever the player is in trouble. Another thing it has over the original game is more variety to the soundtrack, with more tracks that play as the player progresses through the story mode. While Shinin’ Queen is still a great track (and it is in this game too), players would probably want to hear more than that after a while.

While Cleopatra Fortune Plus is a nice sequel/upgrade to an already great puzzle game, the thing that doomed it to obscurity was the fact that it was never ported to any consoles. It could have been rather easy to give this a Dreamcast port considering the Dreamcast and NAOMI were almost one and the same, but the people at Taito and Altron never saw fit to port it for whatever reason. A real shame that it never got ported, because a console port would have given the game more attention for sure.